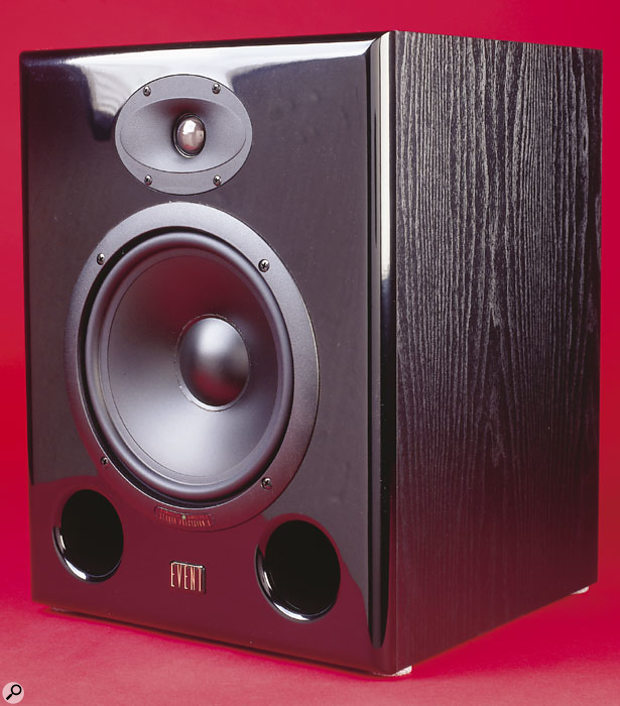 Event up their game once again with their best-ever design for project-studio monitoring. But have they come far enough to continue to face off the competition?

Event Monitors have successfully occupied the middle ground in studio monitoring over the past few years, providing an affordable bridge between budget monitors that may fall short on accuracy and high-cost professional systems priced beyond the project studio market. Now Event have raised the quality stakes with the release of their Studio Precision series, featuring all-new drivers and electronics. There are four monitors in the range, two based on 6.5-inch bass/mid-range drivers and two on eight-inch bass/mid-range drivers. Each size comes in both active and passive versions, though this review focuses on the top-of-the-range ASP8 eight-inch active model.

Compared with other studio monitors, the ASP8 looks rather wide and squat, its 12.5 x 16 x 11.9-inch cabinet being almost 50 percent wider than that of my Mackie HR824s and weighing in at a substantial 32.5lbs. Like the other Studio Precision models, the ASP8s are two-way monitors based on a ported enclosure, where both drivers are magnetically shielded. The dual front porting means the speakers can be used close to a wall (or even be soffit mounted) without upsetting the cabinet tuning. A clever bit of design on the part of Event is that the port tubes are curved inside the cabinet, which means that they can be longer than could normally fit into the space. This extra port tube length apparently allows a more extended low-frequency response, while compromising the transient response less.

In line with other Event monitors I've tested in the past, the parts budget has gone mainly on good drivers and crossover components, rather than on over-fancy cabinet cosmetics. That's not to suggest that the ASP8s don't look great, however — the front baffle has generously rounded edges and is finished in a sumptuous black 'piano' gloss, with recessed driver surrounds and a shallow moulded tweeter waveguide. However, the rest of the cabinet is constructed, albeit solidly enough, from plain old MDF with a black ash finish. A green LED on the front baffle shows when the monitor is powered up.

The one-inch tweeter is a soft-dome device with a ferrofluid-cooled voice coil and neodymium magnet. In audiophile circles, soft-dome tweeters are generally held to produce the most natural and most musical sound, even though they can't match metal-domed tweeters or horns for out-and-out volume. Neodymium produces a stronger magnetic field than standard ferrite magnets, though designers often disagree on whether to use it.

The bass/mid-range unit also uses a neodymium magnet, and employs a mineral-filled polypropylene cone in a damped rubber surround. A high-temperature voice coil drives this cone, and the whole driver is set in a contoured plastic surround that also incorporates the power LED. The contoured surround isn't just cosmetic, however, as smoothing the transition from the driver edge to the baffle minimises diffraction problems, which might otherwise cause coloration. 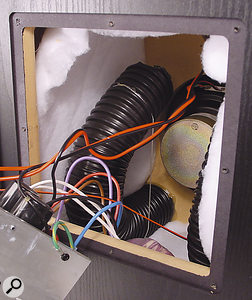 Event have been able to fit longer port tubes into the ASP8 by curving them back on themselves inside the cabinet.Photo: Mike CameronBoth drivers are magnetically shielded to avoid interfering with CRT computer monitors, though of course magnetic fields have no effect on flat-screen TFT displays. The shielding is accomplished not by means of some mysterious force field, but by the simple expedient of using additional magnets to substantially cancel out the stray magnetic fields. Although the drivers are designed to be fairly efficient, there's plenty of power on hand to ensure that they can be driven up to high SPLs without the risk of clipping. An 80W amplifier feeds the tweeter, while a 200W amplifier drives the woofer. These are both programme power ratings, so the continuous power rating will be correspondingly less, but there's definitely no shortage of level or headroom, and the frequency response is an impressive 35Hz-20kHz within 3dB.

The crossover is an active fourth-order asymmetrical design crossing over at 2.5kHz, and includes an internal subsonic filter plus a further filter to combat radio-frequency interference. One of the advantages of an active design is that steeper crossover filters can be employed to minimise the overlap between the ranges of the high- and low-frequency drivers, and also to ensure that very little energy is fed to the tweeter at frequencies below the crossover point where its performance isn't as accurate as within its designed working range.

Further protection circuitry niceties suppress power switching transients (to avoid thumps when switching on or off) and guard against overheating or excessive amplifier current. This is important, as recorded pop and dance music tends to be highly compressed to increase density and loudness, and this in turn means the overall sound energy content is higher than if the audio retained its natural dynamics. By monitoring current and heat, the amplifiers can be shut down in the event of them becoming dangerously hot due to prolonged periods of use at very high listening levels.

The rear panel provides a chassis for the electronics and is also instrumental in shifting heat away from the power amplifiers, but from the user's perspective it provides the control and connection panel for the speaker. Mains comes in via an IEC socket with an adjacent rocker power switch, while the signal input can be accommodated by either a balanced XLR or a balanced jack (wired in parallel). The parallel wiring means that the unused input may also be used as a straight-linked pass-through output if such is required. A small rotary control adjusts the input sensitivity from -20dB to maximum.

For use in surround systems or stereo systems with subs, there's an 80Hz switchable high-pass filter, though there's also a manually adjustable low-frequency control offering up to 2dB of cut or boost below 400Hz (which is 3dB of cut or boost below 100Hz). A similar arrangement allows the high end to be adjusted over a ±3dB range for frequencies above 2.6kHz. This ability to adjust the frequency response isn't purely there to pander to the taste of the user, however, as the low-end performance of a speaker is partly determined by its proximity to walls and corners, so the ability to trim the low end can help compensate for room position. A 3dB cut isn't really sufficient to compensate for corner mounting, but as a rule corner mounting is a very bad idea anyway, as the bass end becomes very uneven. For less experienced users, the switchable 'full space', 'half space' and 'quarter space' settings provided by some other manufacturers may be easier to deal with. The high end may need to be adjusted to match the high-frequency reflectivity of the room, though user taste is also a factor.

Sometimes I feel I need to describe every nuance of the sound in order to give the reader some impression of the character of a speaker I'm reviewing, but in the case of these Events, they just sounded 'right' as soon as I ran them up. They have enormous depth, courtesy of their extended low-end range, and I can't tell you how loud they go because I gave up before they did! Of course the fact that they sound 'right' doesn't mean they are the equal of the very best speakers out there — the Adam S3As I was using for comparison at the time had a slightly more tightly controlled sound and better transient definition, but then they're over twice the price in the UK and feature some very exotic ribbon tweeters. In their own price range, the ASP8s performed beautifully and compared well with my Mackie HR824s, though their soft-dome tweeters give them a slightly smoother sound at the high end and possibly a more natural-sounding mid-range. This smoothness may well win over some audio purists, but both monitors can produce excellent mixes and, at some point, the sound comes down to personal preference, with some users preferring a slightly more 'forward' high end.

Voices came across very naturally, and there's enough resolution to hear when something is perfectly recorded or not. For example, I'd been having some digital audio problems which had been resulting in jitter and occasionally glitches. The problems were quite evident when heard over the ASP8s, as were the benefits afforded by the eventual solution. Although the ASP8s are larger than many project-studio monitors, their stereo imaging is a good as many much smaller speakers, and because they have so much power in hand, they sound effortless, even when handling high-energy dance bass and kick sounds. I used them for a couple of weeks both for electronic and acoustic music recording and thoroughly enjoyed the experience. Any shortcomings they may have are so minor that they won't get in the way of making great mixes, and the quality is, I think, a further step up from previous Event models, which I still feel offer a high level of performance within their price range.

Precision For The Studio

These monitors are the latest and greatest in the Event range, and though the ASP8s are more costly than anything Event have done before, I think the hike in quality justifies the extra cost. It's probably fair to say that this range can stand shoulder to shoulder with the likes of Mackie and the smaller Dynaudio and Genelec models, but as the UK price is also comparable, you'll need to hear them for yourself to see if you prefer their 'musical interpretation' to that of their competitors.

You also have to keep in mind that these are the biggest monitors in the Event SP range, and as such they are probably best suited to those with larger-than-average project studios and who need plenty of level and bass extension for mixing high-energy music. The ASP8s are of course perfectly suitable for mixing more subtle material, but if you don't need this degree of level or bass extension, then the smaller ASP6 model may be a more practical choice, especially if you are working in a smaller room.

I've always had a lot of time for Event monitors, as the designer Frank Kelly always seems thoroughly immersed in his subject and spends his manufacturing budget in the areas that matter most. This new range of speakers is Event's best yet, and they compare well with anything in their price range. There are no clear winners in the monitor market, as every user has different expectations, but the Studio Precision range has placed Event amongst the front runners in their price bracket.

Event have shown that they can produce speakers to compete with the big names in their area of the market. The ASP8s are the best Event monitors yet, but check out their smaller ASP6s if you're working in a smaller space.