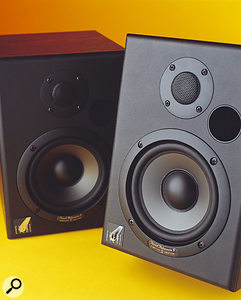 Photo: Mike CameronThe Event two-way active TR8 monitor has evolved from the popular Event 20/20BAS model and utilises the same specification of cabinet, driver and fourth-order electronic crossover. Where the new model differs from its predecessor is in the use of a newly designed, high-efficiency amplifier circuit that claims lower distortion, smoother amplitude and phase response, and an extended frequency response. It can also give out a slightly higher SPL, while at the same time being quieter and offering better common mode rejection via the balanced inputs.

For the benefit of those unfamiliar with the Event lineage, the TR8 and earlier 20/20BAS both use a one-inch, magnetically shielded soft-dome silk tweeter that is ferrofluid-cooled and driven by a neodymium magnet. This crosses over at 2.6kHz to an eight-inch bass/mid-range unit, again magnetically shielded. The driver utilises a mineral-filled polypropylene cone in a damped rubber surround, where each driver is fed from its own power amplifier, giving a maximum SPL of 108dB at one metre. Curiously, the amplifier power is omitted from the spec sheet, but in an active system such as this the maximum SPL is the figure that really matters. The circuitry includes RF filtering, output current limiting, over-temperature protection, anti-thump powering up/down and a subsonic filter to remove ultra-low frequencies that might otherwise compromise headroom and which may cause excessive speaker cone excursions below the cutoff frequency of the ports.

The quoted frequency response is 35Hz-20kHz ±3dB, and the overall size of the monitor is just 10.25 x 14.75 x 11.75 inches, where the drivers and reflex port are mounted centrally in the cabinet. To ensure that the money goes where it matters, the cabinets (which weigh 24.7 pounds) are built from 5/8-inch vinyl-laminated MDF, and have a tidy, no-frills appearance with radiused front edges. Connection is via a panel on the back of the cabinet, where balanced jack or XLR inputs are accommodated along with an unbalanced RCA phono socket. There are no controls for tweaking the frequency response of the speakers, but there is an input sensitivity trim pot with a 20dB adjustment range. Mains is via an IEC socket, and a green LED on the front panel shows when the speakers are powered up.

For applications where a smaller monitor is required, the TR5 is based on the cabinet and drivers of the Event Project Studio 5, but again fitted with the new power amplifiers. The TR5 incorporates a similar-size silk-domed tweeter to the TR8 (though a different model, incorporating a protective grille) teamed with a five-inch bass/mid-range unit, again crossing over at 2.6kHz. The available SPL is slightly less, at 105dB, and the frequency response is 53Hz-19kHz ±3dB, so there isn't so much bass extension, which could actually be an advantage in very small control rooms. The cabinet is significantly smaller at 7.5 x 10.5 x 9 inches and the weight is almost exactly half that of the TR8. 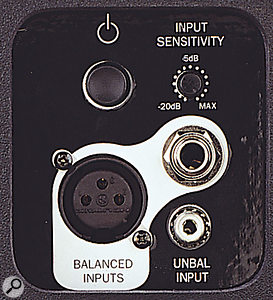 The input section for both monitors features balanced inputs on TRS jack and XLR sockets, as well as an unbalanced input on an RCA phono. A gain trim control is provided for precise level alignment.Photo: Mike CameronIt is now many years since I reviewed the original 20/20BAS active monitor, but I remember it being my favourite of all their monitors at the time, combining a solid low end with smooth mid-range and high end. The TR8 certainly shares those characteristics, though with perhaps a slightly more open sound. In comparison with seriously high-end monitors (in this case a pair of ADAM speakers I'm currently reviewing that cost around three to four times the price of the TR8s), the sound lacks a little detail and air, and the bass sounds less tightly controlled, but within their price bracket they perform surprisingly well, delivering a generally honest appraisal of the music being played without sounding at all harsh or edgy. Their bass extension is more than adequate for most project studios located in converted domestic rooms, and it would be no problem to mix dance music on them provided that you don't get silly with the playback level. They're also revealing enough to make a good stab at mixing sensitive acoustic material.

As you might expect, the little TR5s have a similar family sound, but without the same depth of bass. However, as is so often the case, the lack of bass extension brings the mid-range more clearly into focus, as it's no longer fighting the deep bass for your attention. Despite their small cabinet size, the speakers don't sound boxy or thin, even at fairly robust monitoring levels. Though the maximum SPL is 3dB less than from the TR8s, that isn't a lot in subjective terms, so you still get plenty of clean level at typical nearfield distances. Furthermore, the frequency response rolls off fairly gracefully beyond the stated frequency extremes, and there's also useful bass end down to 45Hz or so.

Event monitors are designed by an engineer who has a long and successful track record in both loudspeaker design and manufacturing techniques, and I think this shows, as the available budget has been spent on the drivers and components rather than on fancy packaging. The use of soft-dome tweeters delivers a smooth and adequately detailed sound, without the rough edge that some metal tweeters have been known to exhibit, while the bass end is a sensible compromise between the available bass extension from relatively small cabinets, and having enough damping to make the bass notes sound controlled. While direct comparison with more esoteric models will reveal their shortcomings to the discerning ear, as a practical solution to affordable project studio monitoring they do a great job, and at the price they're a tough act to follow.

Every monitor is a compromise, but Event have managed to achieve a sensible combination of sound, build quality and accuracy at an affordable price.