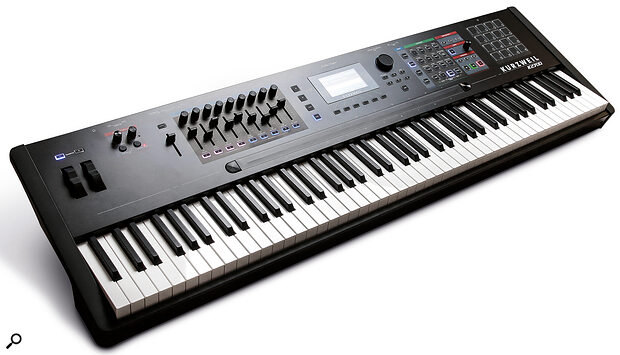 Released in 1991, the Kurzweil K2000 introduced the Variable Architecture Synthesis Technology (VAST) synth engine and it proved to be a great success. Then, when the K2000 was superseded by the K2500 and K2600, VAST was updated and further extended with things such as the KB3 organ and KDFX effects. However, it’s now been 14 years since Kurzweil killed off the K series, although they continued to develop VAST in instruments such as the PC3, PC4, Artis and Forte. There are numerous differences between these and the Ks, but the one that seems most to differentiate them is the omission of sampling. Sure, sample playback was reintroduced in the PC3Kx series, but many Kurzweil aficionados (myself included) have been looking forward to the day when the company releases a new K with all of the facilities of its ’90s predecessors brought up to date with everything that the 21st Century can offer. And here it is... or is it?

In brief, the K2700 comprises the latest incarnation of VAST and its add‑ons, plus sample playback, effects and four flavours of sequencing. Available only with a hammer‑action 88‑note keybed, it weighs in at a solid 24kg, but it’s not as wide as one might expect because Kurzweil have sited its pitch‑bend and modulation wheels behind the keyboard rather than to the left of it. For some players this will be an irrelevance (I, for one, am not a big user of wheels) but others will disapprove more strongly. The keybed itself is responsive and doesn’t clatter, but it has a heavier action than I like on a synth; it’s fine for playing grand pianos, but I don’t view the K2700 as a stage piano with a bit of synthesis bolted on. You can, of course, adjust its velocity and aftertouch responses (the K2700 generates and receives channel aftertouch as well as receiving poly‑aftertouch) but a 76‑note semi‑weighted version would be welcome.

Unlike the rather spartan Forte, the K2700’s colourful panel is in many ways an extension of the PC4’s and, while I’ve heard criticism suggesting that it looks garish, I have to disagree; I find that the colours provide useful information when programming and performing. It has lost the LED ladders that on the Forte showed the current values of the nine control sliders, but the extra knobs sitting behind the nine faders, the transport controls (which work with external DAWs as well as the internal sequencer), the 16 programmable pads and the reinstated ribbon controller are all very welcome.

As delivered, many of the controls to the left of the screen perform standard functions that allow you to modify sounds without invoking the Edit menus, but you can direct their actions to multiple destinations simultaneously so that, in modern parlance, they act as macros, increasing a bit of this, decreasing a bit of that, while introducing a bit of the other. You can also assign a MIDI CC to each, which means that you can record and replay any adjustments that you make. If there’s a shortcoming here, it’s that the 480 x 272‑pixel colour screen is small by modern standards and lacks the touch‑sensitivity of its competitors. Nevertheless, navigation and editing isn’t a problem. Umm, no, that’s not entirely true; a larger screen would be of significant benefit. It’s been 17 years since I first bought a workstation with a large, full‑colour, touch‑sensitive screen, and it’s time that Kurzweil caught up.

As with all VAST synthesizers, it’s difficult to convey how different it is to program the K2700 when compared with PCM‑based instruments from other manufacturers. It’s not that it’s harder, it’s just that... oh well, let’s be honest, it IS harder because you have to learn different ways of doing things. This means that some users have shied away from programming their Kurzweils, which is a shame because there’s enormous potential here if you’re prepared to climb its steep learning curve.

In addition to using the PCMs contained within its 4.5GB factory library, the K2700 also allows you to load your own AIFF and WAV samples at 8‑bit or 16‑bit word lengths and with sample rates of up to 96kHz. Once imported, you can use these samples to build sounds by creating new Keymaps (the fundamental building blocks of VAST Programs) that contain them. To test this, I took a recording of my own voice, imported this as an aif, and then built a choir by creating and detuning multiple Keymaps and passing them though suitable effects. The results sounded great, but the time taken to achieve them was truly horrendous because of the lack of any graphics to aid sample editing. Previous Kurzweils have offered this, but the all‑important Trim page is missing from the K2700. Hopefully, the company is working on this because, if not, it’s a very nasty limitation.

The K2700 also offers Kurzweil’s KB3, FM and VA1 extensions. I wasn’t a huge fan of the KB3 organ when it first appeared, but it has improved over the years and I would now have no hesitation using it live or in the studio. If there’s a problem here... well, there are two. Most obviously, it’s uncomfortable to play screaming organ licks on a hammer‑action keyboard. Secondly, while the nine faders and their associated buttons are fine for use as drawbars as well as chorus/vibrato, percussion and key‑click controls, the rotary speaker’s speed is, by default, controlled by the Variation button that sits behind the master volume control. This is possibly the worst position if you’re playing with both hands and are hoping to flick from Chorale to Tremolo (or back again) in the split second between notes. Unfortunately, due to the absence of a left‑hand performance panel, there’s nothing that’s much better positioned. You can transfer this action to modulation sources such as foot pedals and aftertouch, but it would be nice to have a button or switch in a suitable position without having to screw one onto the front of the synth. (Don’t worry, Kurzweil... I didn’t.)

Next comes the 6‑op FM Engine, which offers many waveforms as operators. But if you want to stick with traditional sine‑wave FM, it’s trivial to recreate and load Yamaha DX/TX programs. When replayed, these sound exactly as one would expect but with 21st Century audio quality. The e‑pianos are gorgeous, and even something as simple as applying the K2700’s effects to a DX Pipe Organ is just... wow! An FM patch occupies a single Program Layer so it’s easy to recreate DX1 or even TX816 sounds, but each FM voice uses four K2700 voices so a four‑layer TX816 sound reduces its polyphony from 256 to just 16 notes!

Now we come to the K2700’s “power‑shaped oscillators along with DSP processing from Kurzweil’s mythical VA1 concept synth”. I have no idea what a power‑shaped oscillator might be but, in short, you can replace VAST’s sample‑based sound generation with your choice from 25 DSP‑generated waveforms, some offering both anti‑aliased (DSP hungry) and non‑anti‑aliased (less hungry) alternatives. Whichever you choose, these are then passed through the same VAST synthesis architecture as before but with...