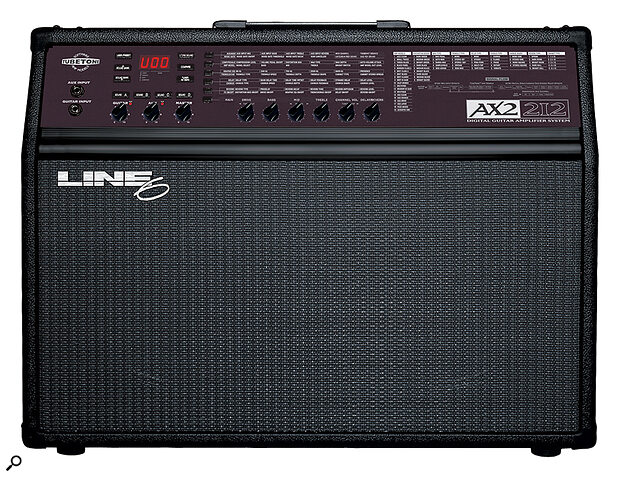 Line 6 announce a software upgrade for their physical modelling guitar amplifier. Paul White plugs in, turns on and checks out the reborn AX2.

Back in June this year we reviewed one of the new Line 6 Flextone combos, not because we've suddenly become a guitar magazine, but because the amplifier uses state‑of‑the‑art physical modelling and DSP technology to recreate vintage guitar sounds. This is obviously attractive for the player who wants access to lots of different types of sound, and because all Line 6 models include a speaker‑simulated line output and a host of effects, recording from them is easy.

What we haven't reviewed in SOS is the original Line 6 AxSys 212 combo; a heavy and powerful brute fitted with two 12‑inch speakers, two 50W power amplifiers and a complete virtual rack of guitar amps, effects, fuzz pedals, wah and loads of other good stuff. Unlike the later Flextone models, the AxSys 212 featured a completely editable multi‑effects section, plus more parameter tweaking in the amp models. Editing was easy — all the adjustable parameters were shown on a front‑panel matrix with knobs at the bottom of each row and buttons at the start of each row. All you had to do was select a row using the buttons, then turn the knob directly beneath to make adjustments. Apparently, even this was way too scary for some guitar players, hence the simplified Flextone models, but I was convinced enough to buy one. It sounded good, all the effects settings and levels were saved with a patch, and it was surprisingly loud. It was just what I always wanted, but last week I said goodbye to it forever. Why?

Line 6 have discontinued the AxSys 212 and replaced it with an even more powerful model, with better styling and a wider choice of amp and effect types. You'd expect this to leave existing AxSys owners somewhat out in the cold, but no — for just under £100, you can buy an upgrade kit that completely transforms your old amp into the brand‑new Line 6 AX2 212 (alternatively, of course, you can buy the AX2 212 from scratch if you don't already have the older AxSys 212). The upgrade kit comprises a new stick‑on front panel, an EPROM, a new keypad and restyled knobs. Though you can get a dealer to fit the upgrade, I found it very straightforward — the most complicated thing you need is a stubby cross‑headed screwdriver. The self‑adhesive front panel fits directly over the old one, and includes a complete listing of the amp models and effects types.

Since the AxSys 212 was released, significant improvements have been made to the tube modelling, not only in tonality and responsiveness, but also in bringing together the various clean, crunch and dirty versions of individual amplifiers to form a single 'unified' model. The tone control arrangement has also been simplified so that the 'main row' physical knobs control the actual tonal elements within the model rather than simply adding extra EQ on top of what was programmed in via the Preamp parameter row. You still get a post‑model graphic EQ with a Presence control, but in order to stay true to the original amps, the Presence control is only available if the original amp had one. Similarly, the EQ position in the signal chain is as per the original amp, though when emulating amplifiers which only have bass and treble controls, the 'spare' mid EQ control is placed after the amp model to add a little more flexibility. This attention to detail carries through to other amp parameters, such as the Bright switch — again, available only if the original amp had one.

With the AxSys 212, the knobs had no effect until they passed through the previously programmed value, when they would 'pick up' control and work as normal. The new model can be set to work this way, but the default mode allows a knob to become active as soon as it is moved. In this mode, regardless of what setting is programmed, the parameter jumps directly to the value indicated by the knob position as soon as the knob is moved slightly.

The original AxSys included models based on the analysis of a number of classic Fender, Marshall, Soldano, Boogie, Roland and Vox amplifiers. That list has now been expanded with the addition of a 1960 Fender Champ, a 1952 Fender Deluxe, a 1964 Fender Deluxe Reverb, a 1965 Fender Twin (an improved version of the original Fender Twin model), a 1960 Vox AC15, a 1985 Mesa Boogie IIc ++, a 1988 Soldano preamp and two rather exclusive American hand‑built amps, the Budda Twinmaster and the Dumble Overdrive Special. These new amp models are all unified, so you don't have to switch models to get clean or dirty sounds.

To make the effects section more exciting, there's now an Octave Box based on the Tychobrahe Octavia, a tape echo simulation where the repeats get muddier as they die away, vibrato, and a Ring Modulator — useful in experimental music. Users with a Line 6 Floorboard controller will also notice an improved wah‑wah, and the boost switch has been changed around to provide a real gain boost over and above that set up for the amp model.

There are further cabinet emulations, so that your choice of amp model can play through one of more than a dozen cabinet types ranging from an open back 1 x 12 to a closed 4 x 12 with speakers from either side of the Atlantic.

Once the upgrade is installed, all the existing user patches are translated 'on the fly' to work with the upgrade. Existing patches will undergo some slight tonal changes due to the revised models used in the upgraded amp, most of which are slightly brighter than those of the original. It's not until you physically save the patches again that they are stored in AX2 format — until then they are still AxSys patches. The factory patches also change when you upgrade, and now the banks (each bank contains four sounds) tend to be based around specific amplifier types. For example, Bank 1 is based on the Roland JC‑120, Bank 2 on the Fender Deluxe and Fender Champ, Bank 3, Fender Bassman and so on. Banks 20 to 22 feature specific effects setups while the remaining 10 banks are modelled on famous players. You get Jimi Hendrix Little Wing and Purple Haze tones, Eric Clapton circa Cream, David Gilmour, Mark Knopfler, BB King and so on. It must be stressed that these patches aren't created by, or endorsed by the artistes themselves — they're simply put together by the guys at Line 6 to show what their amp can do, and all will require some adjustment if you don't have the same guitar (or playing chops!) as the original artist.

The AX2 is a great new amp for anyone looking to get all the guitar sounds and effects they need from one box, and though a real tube amp feels a little different to play, I've found the tonal flexibility to be worth any tradeoff. This certainly comes closer to the elusive valve sound than anything I've tried that didn't actually contain valves, though players who prefer to use just one or two sounds will probably be happier sticking with their favourite amp.

For the existing AxSys 212 owner, the upgrade is a real bargain — not only does it freshen up the appearance of your amp, it also greatly adds to its tonal flexibility. The tape delay is a particularly nice touch, as is the Fender Champ model — my other amp is a Fender Champ, and this one can get pretty close. The bottom line is that this upgrade makes what was already a worthy studio amplifier even better, and for gigs, it certainly saves a lot of time wiring up effects and matching levels.

The AxSys 212 was a remarkable amplifier, and the ability to upgrade it as you would a computer or piece of software should ensure that it remains at the cutting edge of guitar technology.