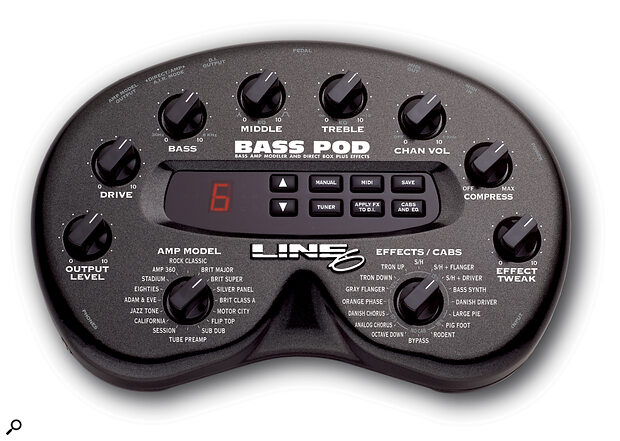 At last, an easy way of consistently getting a polished, 'produced' bass guitar sound in your recordings! Dave Lockwood tests a physical modelling processor that bass players and engineers alike will welcome.

It was entirely logical that a dedicated bass unit should soon follow in the footsteps of the original ground‑breaking Pod guitar processor. Indeed, it could be argued that the bass model actually addresses an even more pressing need, as the instrument itself is inherently more difficult to record to a high standard. The basic hardware for the Bass Pod is identical to the regular Pod, both internally and externally, the only differences lying in the operating software and the legending around the controls. The case colour, however, is metallic grey to provide a clear differentiation between the guitar and bass versions.

Like the guitar version, the unit can be run via presets, or in Manual mode where all controls are 'live', allowing the user to select from a range of well‑known bass amp/cab models (all fully identified in the manual) via the 16‑position rotary control on the front panel. A second 16‑way rotary switch gives access to 15 bass effects, including emulations of famous stomp boxes and rack units — the sixteenth position is bypass, where I suspect it will remain firmly fixed on a lot of Bass Pods.

A Drive control sets the basic sensitivity and, where the original amp would have allowed this, there is enough range for you to dirty up the sound a little at higher settings. Continuing the arc of controls across the top of the unit, there is a standard three‑band EQ line‑up that changes its character to mimic the controls on the amp being modelled. A further EQ stage is available, in the form of a post‑amp‑modelling parametric which proves very useful for additional fine‑tuning and tweaking without changing the fundamental character of the sound.

Although it still has the two output jacks of the guitar Pod, the Bass model's output signal is mono rather than stereo — the second output jack is used to provide an unprocessed DI feed which can be recorded separately. Although the DI signal on its own will usually be clinically clean and lacking in character, it can often prove useful during mixing to add articulation to the miked sound in a way that EQ never can. Also, in cases where the recorded bass performance is good, but the sound poor or simply inappropriate, the DI track can be used to rescue the situation by re‑amping — sending the signal from the recorder out to a bass amp and then returning the miked‑up sound to the console. Clearly, the Bass Pod lends itself particularly well to re‑amping applications, allowing you to tweak the settings whilst listening to the sound in its real context. Sensibly, the user can choose to have effects appear only on the amp‑modelled output, if required, leaving the DI signal clean. Each effect has a single parameter that can be adjusted via the Effect Tweak control, though more adjustment can be achieved using the Emagic Sound Diver editing software included with the Bass Pod.

A slide switch allows the user to deactivate AIR (Acoustically Integrated Recording) — the DSP which simulates the sound of the speaker, the microphone and the air between them — when using the Bass Pod to feed a bass‑amplification rig with real speakers of its own. For direct recording (or feeding straight into a PA rig), however, the AIR feature should always be activated.

The broad range of amp types modelled include Mesa Boogie, Polytone, Gallien Krueger, Sunn, Acoustic, Ampeg, Marshall, Vox and Fender plus a few rare vintage types. Curiously, there's no Trace Elliot, but to my ears you can get something pretty close via the Gallien Krueger model — lots of headroom and dipped mids go a long way. Each of the amp models may be teamed with a choice of virtual speaker cabinet, equipped with 10‑inch, 12‑inch, 15‑inch or 18‑inch speakers.

Only 32 user patches can stored internally, and these have to overwrite the factory patches, but you can customise the defaults for both the amp/cab setups and the effects, so that when you dial up any of the amps in Manual mode you get your version of it, already tweaked to your preferences. Other nice features include the ability to vary the centre frequency of the main three‑band EQ's mid‑range control, where appropriate to the amp model in use, and a very neat facility that allows you to send only part of the frequency spectrum to the effects — the Effects Crossover is variable from Off all the way up to 1kHz and allows you to use, for example, rich chorus settings which have been filtered at about 600Hz to prevent them turning your entire bottom end into a churning mush. The onboard tuner is effective enough and will give a stable reading on a low B string, for 5‑string players.

What you hear from the Bass Pod is not so much the sound you would get standing in front of a real bass amp, but more the sound of a bass amp that's been expertly recorded in a studio. Compared to a straight DI'ed bass, the sound is more complex, more interesting and certainly more fulfilling for the player. The key ingredient is the 'thump' and low‑end resonance that the speaker and its enclosure adds, which contains an unpitched LF component that gives fullness and body even to the higher notes on the instrument. Playing in the same range via a straight DI will have you reaching for the low EQ, but then the lower range will sound overblown and flabby, tempting you to tighten up the compression, squashing all the life out of the signal... We've all been there!

The key to getting a bass guitar part to sit comfortably in a mix is achieving the right balance between the pitched low‑end necessary to support the musical superstructure above, the rhythmic punch component that works with the bass drum and the articulation necessary to hear the phrasing and timing of the bass line. If the original sound simply doesn't contain enough of each of these elements, then there is a limit as to how far you will be able to rescue the situation with compression and EQ. The Bass Pod sounds, however, instantly have that controlled quality and a completeness that just sounds 'right' when all the other instruments are in the balance. Of course, there are always small tweaks still to be made for musical taste and style, but you are free to make those decisions from a position where the hard work of making the sound fundamentally viable has already been done for you.

The presets, as usual, have been set up to display the full sonic palette that the amp models and effects are able to offer — watch out for 5C 'Sub Dub Fuzz' which really should carry a health warning, as its combination of extreme compression and distortion will take your head off if you switch to it accidentally while monitoring at a decent level on headphones! What most bass players will really appreciate in a recording situation, however, is just to be able to step through a range of different basic tonalities, each with sensible EQ and compression settings. Fortunately, when you do get down to evaluating just the basic amp and cab models, they prove to be a pretty impressive bunch. Which ones stand out for you will probably depend on the style of music you are involved in, but there are clearly some uncannily accurate 'signature' sounds here, from the raspy Marshall of Cream‑era (well, any era, really) Jack Bruce, through thumpy, James Jamerson‑era Motown, to an awesome, Pastorius‑like, mid‑boosted Acoustic 360.

The modelled LA2A compressor is a real treat and works beautifully in this application. In some ways, it's actually better than the real thing, as at moderate compression settings there seems to be rather more immunity to overshoot on sudden 'popped' notes. Ironically, the restricted dynamics evident in the guitar Pod are a distinct advantage in recording bass, where heavier compression settings are generally used to achieve the consistent bass energy required for popular music. In addition to the compressor, the actual effects are all pretty convincing too, with perhaps only the octave‑down pitch‑shifter failing to live up to the real‑world item that inspired it.

To sum up, if you record real bass guitar as part of your work then the Bass Pod is possibly the most genuinely useful tool you could add to your studio armoury. It really does make the often hit‑and‑miss job of obtaining a controlled, tight, punchy recorded bass sound into a virtual no‑brainer. You just plug in, choose your amp, and there's your sound — reliable, repeatable, consistent.

Where the guitar Pod has a dedicated reverb processor that may be used independently of the other effects, the Bass Pod instead has a compressor, modelled on the famous Teletronix LA2A — a tube‑based model that is considered the standard choice for recording bass in many professional studios. Although the real thing is actually easy enough to use, Line 6's modelled LA2A has been made even easier to drive, such that all the user has to do is dial up more or less of it via the Compress knob. This single control then takes care of balancing a number of parameters, including make‑up gain so your level remains consistent as you add compression.

An in‑built noise gate is also available to take care of background noise between notes — heavy compression tended to raise a noticeable amount of output hiss. However, in normal usage (albeit without effects) noise proved sufficiently low that I didn't feel a need to employ the gate at all for recording.

A convenient and keenly priced way to get a variety of bass sounds that sound great in your mix.