Line 6's DT25 has been designed in collaboration with US amp designer Reinhold Bogner. This amp combines a modelling front end with a single 12AX7 valve stage, plus a power stage that employs a pair of EL84 valves. Interestingly, it has a switchable low-volume mode, in which modelling is used to maintain the sound of a hard-pushed output stage at lower master volume settings, which should be useful in the studio. 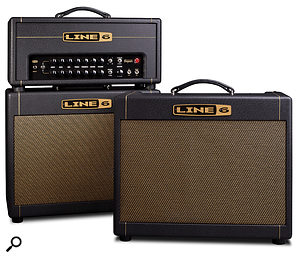 The DT25, rated at 25W in Class A/B mode and 10W in Class A mode, is available in both combo and separate head/cabinet versions. A modelled spring is the only dedicated on-board effect, but like Line 6's Pod 300, 400 and 500 HD processors, the DT25 incorporates the company's L6 Link networking technology. This means that if you have a Pod HD it's possible to make its effects available to the amp within a virtual effects loop, while still placing distortion, wah or compression in front of the preamp model. Selecting a Pod HD preset also reconfigures the amp so that all your sound-shaping elements from both devices are stored in a single patch, but the integration goes deeper still: it allows the amp to automatically reconfigure to the appropriate output stage when you select an amp model on the connected Pod. Add one of the new James Tyler Variax modelling guitars, and all three devices can be saved to the same patch.

Digital switching reconfigures the output stage's class, feedback and pentode/triode status which, in combination with the four amp voicings (American Clean, British Crunch, Class A chime and Modern High-gain) gives plenty of scope for tweaking. Other than the few sprung toggle switches that control this switching, though, the DT25 looks pretty conventional. Rotary pots govern Drive, Bass, Mid, Treble, Presence, Reverb and Volume, and the panel is back-lit to show the control names. The low-power switch is joined on the rear panel along by 4Ω, 8Ω and 16Ω speaker jacks; a balanced XLR; a speaker-simulated, balanced DI output; a ground-lift switch; and further connections for MIDI and L6 Link In and Out. There's also a TRS footswitch jack for reverb and channel switching, plus an analogue effects loop. MIDI may be used to change channels, bypass the reverb and select each channel's amp voicing.

The four amp types start with a generically Fender-like sound that starts to break up nicely at higher drive settings. Amp two has a thick and gritty Marshall-like character, while amp three is inspired by the Vox AC30 Top Boost, with its subtle break-up and jangly edge. The fourth amp gives more overdrive and falls into the Boogie-meets-Soldano camp. All four are very playable. The design manages to capture the touch sensitivity of a real preamp, while the valve output stage bestows some of the physical feel that only a valve amp seems to give. The DI output sounds fine, but then if you're going to use the DI Out for all your recording, you may as well just buy a POD!

The amp usually needs to be played reasonably loudly if the power stage is to contribute much to the sound. However, switching to low-power mode increases the amount of apparent power-stage distortion at lower master volume settings, and this works well, to my ears, in achieving a very recordable sound at sensible listening levels. It's also interesting to switch amplifier classes to see what difference that makes to the sound, though there's a noticeable level jump between Class A and Class A/B and also between Triode and Pentode operation. Triode offers a useful variation if you want a thicker, less focused sound with a bit more of a vintage growl to it. The amp has a reasonably low hum and noise floor, and it can still sound good at modest volumes — although it is quite capable of small gig volume, even in its 10W Class A mode.

In some ways, the sound comes very close to that of my Vox Valvetronix VTX60 combo, especially on the 'Brit Class A' setting, but for cleaner, Fender-like tones, the DT25 delivers more clarity and punch. The Line 6 reverb is excellent and the low-power mode really works well for recording if you're trying to achieve that smoking stack sound at a manageable volume. I missed the built-in effects of my Vox, but it's easy enough to patch in other effects via a Pod or the effects loop. Ultimately, I think the DT25 manages to pull off the trick of looking, sounding and feeling authentic, while combining the flexibility of modelling and switchable power-amp topographies.  Paul White