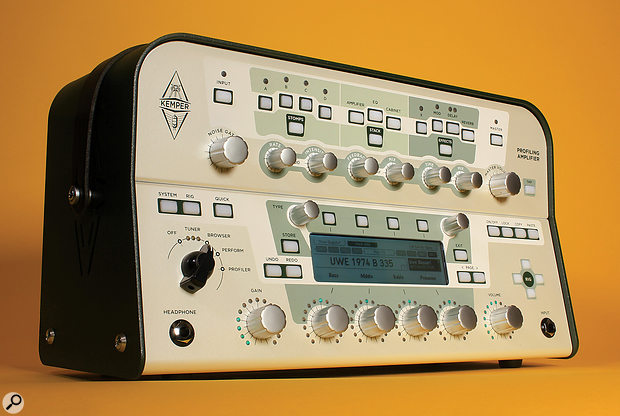 This new approach to guitar-amp simulation from the creator of the Access Virus synth promises to let you accurately capture the sound of all your favourite tube amps...

Accurately recreating the behaviour of a valve guitar amp in the digital realm is an extremely tricky task, partly because that behaviour is complex, and partly because guitarists are a hard bunch to please. Digital modelling has come a long way, and the best software amps and hardware modellers can produce sounds that are indistinguishable from a miked-up amp, but many guitarists still complain that crucial aspects of the 'feel' of a real amp — the many intangibles wrapped up in playing dynamics and tonal response — are lacking.

The Kemper Profiling Amplifier (KPA) takes a new approach to the challenge of fitting real amps inside a digital box. Designed by Christoph Kemper, founder of Access Music Electronics and creator of the popular Virus synth line, the KPA promises to capture the exact sonic characteristics of any amp by playing a series of test signals through it and analysing the result. Rather than trying to model the entire behaviour of the amp, the idea is to take a detailed snapshot of a specific setup (the amp's controls at specific settings, and the amp miked up in a certain way) and recreate this exactly. What's more, the KPA allows users to create and share their 'profiles', offering virtual access to a potentially endless range of amps around the world. 'Highly anticipated' scarcely does the KPA justice!

When using, saving or recalling sounds, you'll be dealing with one of the KPA's 'rigs'. Each rig (up to 1000 of these can be stored) contains your complete signal chain and is divided into three sections, as seen across the top half of the front panel. The Stomps section comes first, with slots for up to four mono effects. Next, the Stack contains your chosen amp and cabinet profiles — the profiling process captures both at once, then separates the two elements so you can mix and match — and an EQ section common to all profiles, with bass, middle, treble and presence controls. Finally, the Effects section has four more effect slots, this time with stereo capabilities. While the last two are reserved for delay and reverb, the 'X' and 'Mod' slots can host any effect. 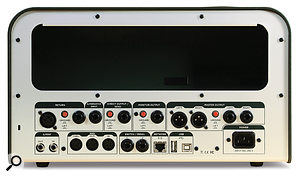 The rear panel is crammed full of connectors for the different sections of the device, and each has its own ground-lift switch.Navigating around your rig is very intuitive. Pressing any of the backlit buttons switches that item or section on and off — so you could, for example, switch the Stack off and use the KPA solely as an effects processor — and holding the button down for half a second calls up detailed settings on the LCD screen. Here, the surrounding context-sensitive buttons allow in-depth adjustment of settings. The store button lets you save any element and all its settings, whether it's an amp, cab or effect, or a whole Stomp, Stack or Effects section, as a preset. Copy and paste buttons let you move elements from one rig to another.

By default, the four rotary controls below the screen give you the amp's EQ settings, to go with the dedicated gain and volume knobs either side, so you can just reach out and make adjustments on the fly as you would with an analogue guitar head. There are further dedicated knobs above, for the noise gate, master volume, and mod, delay and reverb effects slots. This welcome sense of hands-on control underlines the fact that the KPA is very much designed as a stand-alone device; there's no computer audio interface built in, and the USB socket on the back is just for installing firmware updates, sharing profiles and rigs with others and backing up your settings. There's no shortage of connection options at the rear, however.

The S/PDIF digital I/O is joined by a selection of analogue ins and outs with (very sensibly) individual ground-lift switches. The main stereo out (on XLR or quarter-inch jack) is joined by a mono monitor output. With half an eye on live use, the monitor out has its own level control to feed a stage monitor. You can also switch off cab modelling for the monitor output only, while using it to feed a power amp and guitar cab.

The quarter-inch direct output carries the original guitar signal, straight from the input and untouched by A-D conversion. This is used during the profiling process to feed the amp being profiled, but it also provides the opportunity to capture that signal for re-amping later. The XLR/quarter-inch return input receives the mic signal during profiling. It's worth noting, if you want to use a condenser mic, that the return input does not provide phantom power, but this will be a moot point if, as I did, you want to use an external preamp for additional level and EQ control. When playing as opposed to profiling, the direct output and return input, together with the quarter-inch alternative input, act as an external effects loop that can be positioned in one of the Stomp effects slots (mono only) or in the post-stack X or Mod slots (mono send, mono/stereo return).

Completing the busy back panel, there are two quarter-inch-jack inputs for connecting expression pedals or one- or two-button momentary footswitches. MIDI In, Out and Thru sockets offer further remote-control possibilities. While 128 program change numbers can be freely assigned to switch between individual rigs, I was initially disappointed that control change implementation was limited to little more than bypassing individual effects. However, recent firmware updates have been gradually expanding the possibilities here and will hopefully continue to do so. I can't see any reason why any parameter inside the box should not theoretically be available for external control, and the ability to map things like delay time or modulation rate to an expression pedal would open up great creative possibilities.

Kemper say that another mode, called 'Perform' (which sounds as if it will be geared towards live use, but I was unable to confirm this at the time of writing), will be added by a firmware update in the near future, along with tweaks to improve browsing through presets and the means to rearrange and rename rigs and profiles outside the box (entering text letter-by-letter via a rotary knob is a real grind!). That may all have come to pass by the time you read this, as Kemper have so far seemed very responsive to feature requests and bug reports, releasing a new update every two weeks or so. There are two ways to look at this: anyone inured to regularly dealing with driver updates and software patches will probably appreciate Kemper's ongoing effort; but on the other hand, guitarists used to dealing with real, physical amps may wonder why the thing they've just bought needs updating at all. I lean towards the former, more positive view, partly because Kemper seem committed to continually improving the product, but mostly because, a few minor gripes aside, the KPA already does so much, and does it very well indeed.