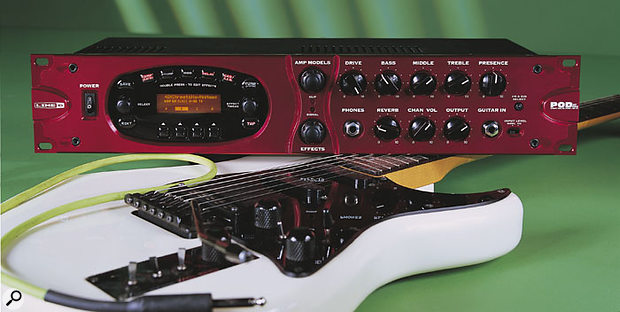 Line 6 give their PodXT the Pro treatment, adding comprehensive I/O and flexible output configurations to their successful modelling processor.

PodXT Pro offers the same amp/cab modelling and effects facilities as the standard PodXT model, but adds more professional connectivity options. The user can now select from guitar, line, S/PDIF, or AES/EBU inputs (there are two channels in the digital format which mix to mono if both are used together), the additional options being useful for re-amping an existing recording or for processing the output of a synthesizer. Supported sample rates are 44.1kHz, 48kHz, 88.2kHz and 96kHz and the resolution may be either 16, 20 or 24-bit. As with the XT, there's also a USB port for connection to a computer, enabling recordings to be made without the need for a soundcard.

Outputs are provided as unbalanced analogue outs on quarter-inch jacks, balanced XLRs (selectable between -10dBV and +4dBu), S/PDIF phonos and AES/EBU XLRs. A further jack carries the unprocessed guitar output signal (useful both on stage and in the studio where the PodXT Pro is being used in conjunction with another guitar processor or amplifier), plus there are stereo effects sends and returns on individual jacks. That leaves the Ethernet-style floor controller connector plus the USB port which, in addition to its audio transfer capabilities, may also be used for editing and patch transfer via a Mac or PC, or for accessing Line 6's on-line subscription services (PC only) normally accessed via the company's Guitar Port. When used with the on-line guitar tutorials, patch data is loaded directly into the unit, as opposed to the Guitar Port where the computer powers the amp modelling. The same software that works with the Guitar Port also now serves as an on-screen editor for the PodXT and PodXT Pro. MIDI In and Out/Thru connectors are fitted to the rear panel, and power comes directly from the mains.

The DSP engine utilises amp and cabinet modelling algorithms developed for Line 6's latest Vetta modelling amplifiers and combines these with a number of effects, many taken from their Modeler range. The PodXT Pro also benefits from the much-improved user interface of the PodXT, whereby on-screen 'virtual' knobs show both the stored data positions and the physical position of the front-panel knobs. The majority of the controls are identical to those on the PodXT reviewed back in SOS January 2003.

Clip and Signal LEDs are fitted, which aren't on the PodXT, and there's also a further button for selecting the I/O options. A slide switch selects between normal and high-output guitar pickups. Optional floor control is available by connecting a Line 6 FBV floor unit such as a Shortboard — important if you need to operate the internal (and rather good) wah-wah effect in real time. The PodXT Pro has the same Bass, Middle, Treble and Presence controls as many 'real' guitar amplifiers, plus Drive, Channel Volume and a master Output control. A dedicated knob controls the reverb intensity, and there's also a dedicated compressor based on the classic LA2A.

Patches are organised as 16 banks of four patches, and all can be overwritten. A further 64 memories are available for effects settings, and 64 factory effect settings are loaded up including both single effects and combinations. The four buttons that access the compressor/gate, stomp box, modulation and delay sections are to the immediate left of the Cab/Air button, which is used to choose from a repertoire of modelled speaker cabs, mic types and mic positions. The AIR (Acoustically Integrated Recording) facility models the effect of the room acoustics on the sound, and is fully variable. The virtual mic section offers the choice of two dynamic mics on axis, a dynamic mic off axis, or a capacitor mic on-axis. Tap may be used to tap in delay effect or modulation timings and, when a floor controller is connected, there's also a footswitch for this purpose.

The integral tuner is the same as on the PodXT, which is to say that it is more accurate than the one on the original Pod. Each of the 32 amp models loads up with suitable default speaker cabinet and control settings, but you can customise these so that every time you select your favourite amp model as the basis for a new patch, it automatically loads with your favourite speaker cab and EQ/drive settings. A page within the software configures the outputs for use with a power amp and guitar cabs, with a guitar amp and speaker, or when DI'ing or recording. A Live mode allows the jack outs to bypass the AIR function while AIR processing is still being applied to the balanced XLR and digital outs — a good choice where the jack outs feed a stage amplifier, as the Output level control affects only the unbalanced jack outputs. In Studio mode, AIR affects all outputs, and the Output level control affects both jack and XLR analogue outs.

The Edit mode is entered via the Edit button, though double-clicking any one of the four effects buttons or the Cab/Air button gets you directly to the edit pages for that specific section. These effects buttons light up when their associated effect is active, so you can use them to toggle effects on and off while you're playing. When the amp settings are being adjusted, the display automatically shows icons for the six control knobs, with both their physical and stored settings indicated.

The volume pedal, which is part of the Shortboard's armoury, as well as the delay and modulation blocks may be inserted either before or after the amp-modelling stage. All the effects employ fairly basic, stomp box-type controls, so there are only usually three or four parameter knobs to tweak. Even so, the reverb is much better than on the original Pod, and offers a comprehensive choice of room/hall/spring types, as well as variable decay time and reverb mix.

Via their USB sockets, both the PodXT and PodXT Pro can now be used to access the Line 6 on-line subscription services previously only available to the company's Guitar Port PC USB audio interface, as both include the necessary security keys which make this possible. The main difference is that, while Guitar Port uses slightly simpler amp emulation software running on the host computer, the PodXT models use their own hardware. The Guitar Port's software interface can also function as a graphical front end for PodXT and PodXT Pro, although Mac users (who can't use the on-line services) have to download a free stand-alone editor from the Line 6 web site instead.

There are also PC USB audio/MIDI drivers for download which let you control the PodXT or PodXT Pro directly via USB from your PC with MIDI messages, as well as letting you record audio into your computer, without the need for a separate MIDI or audio interface. However the Mac drivers are less developed: the Mac OS 9 driver currently only supports audio recording, and the OS X driver currently only supports MIDI control.

Despite the PodXT Pro's slightly higher UK cost, I didn't detect any noticeable difference in sound quality — what you pay for is the nicely presented rack hardware, mains powering and a professional set of both analogue and digital I/O connections. Both the touch responsiveness and the quality of the cleaner amp models is very significantly improved over those in the original Pod, and there is no noticeable circuit noise.

The in-built USB audio interface is useful for recording and for using the editing software, and although the Mac support situation is less comprehensive, it seems to be improving all the time. I still think the PodXT Pro and, of course, the original PodXT are currently the most effective guitar-modelling products of their type, and the extended I/O capability of the Pro version could make life easier both in the studio and on stage. 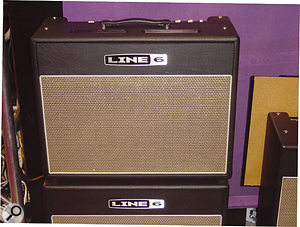 Photo: Mark EwingThe new Line 6 Flextone III is also worth a mention here, as it has a preamp system based closely on that of the PodXT, though with a simplified control system, a limit of four user patches (unless one of the optional Line 6 foot controllers is used) and some interesting new amp models not available from the PodXT or PodXT Pro. Available in both 1x12 and 2x12 configurations, the Flextone III includes a stereo power amp section (with 50 Watts per channel), so that even the single-speaker model can be used with an extension cabinet to provide stereo operation. There's also a stereo pair of balanced XLR outs (with level trim and ground-lift switch) that make use of Line 6's cabinet modelling and AIR function for feeding a PA system or for recording.

A rotary switch selects from 32 onboard amp models, while pressing and turning the switch selects from 16 cabinet models. The main controls are essentially the same as on the PodXT and PodXT Pro, but the four patch selection buttons also work as patch storing buttons when held. If an optional Line 6 foot controller is connected, up to 32 patches can be named and saved, the internal wah-wah effect can be controlled with a pedal, and a tuner is available via the display on the floor controller. If none of the four patch buttons are lit, the amp goes into manual mode, where the physical knob settings correspond to the amp's settings.

Dedicated knobs set the reverb, delay and modulation effect levels, and either the delay or modulation knobs can be used in conjunction with the Gate and Comp buttons for adjusting the integral gate and compressor thresholds. The familiar Tap Tempo button sets modulation or delay rates according to the rate at which the button is tapped. There are six delay types and six modulation effects, but the overdrive and other stomp box-style effects from the PodXT are absent.

As a guitar combo for live or studio work, the Flextone III comes across as loud and assertive, and it DI's much like a PodXT. I particularly like the new Class-A model based on the British Cornford amplifier, and there are also more variations on the Marshall-inspired model. The 1x12 version loses out on the stereo capability of the effects unless an extra speaker cab is used, but that doesn't affect its DI recording capabilities.

Although the PodXT Pro is sonically identical to the PodXT, it has far more comprehensive I/O capability.