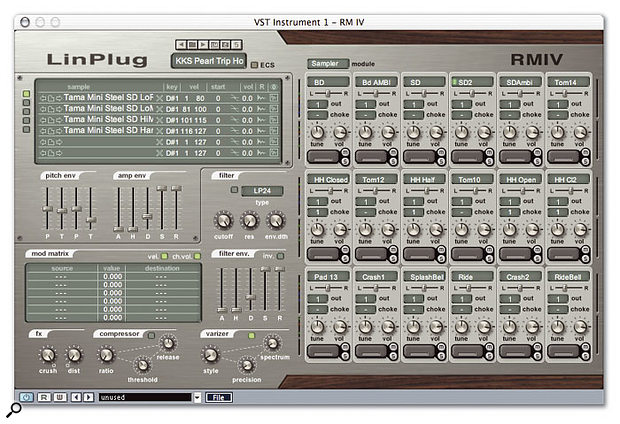 With their new VST Instrument, Linplug are aiming to combine the flexibility of a software synth and sampler with the simplicity of a hardware drum machine.

Until recently I'd ignored the Linplug range of VST Instruments, as the name mistakenly led me to believe they were associated with Linn, and I've never been a big fan of Linn drum machines. I was missing out. Linplug's name actually comes from founder Peter Linsener, and the company is steadily making a name for itself with some great instruments. You can check this out for yourself by downloading their freeware Alpha synth, a two-oscillator analogue clone that gives the BassStation a good run for its money. RMIV is a VSTi that packages powerful sample playback and analogue-style synthesis into a very user-friendly virtual drum machine. The module's features and capabilities (and price point) place it in the same ball park as Native Instruments' Battery and FXpansion's DR008, but Linplug have tried to set it apart by their choice of user interface. The result is that users familiar with, say, Reason's Redrum, or a hardware drum machine, will be more comfortable with RMIV than with a typical sampler package.

At present RMIV requires a VST host, running under either Windows or Mac OS X. I couldn't get it to run in any of the OS X 'wrappers', so this pretty much limits you to using it with Cubase if you're on the Mac. However, Linplug are working on Audio Units support, which will bring Logic and DP users into the fold. There are no plans for an RTAS version. Installation is from a single CD, including the 1GB (after decompression) sound and kit library. See the separate box for a look at the supplied kits, and info about compatibility with other sample banks. Copy protection is handled by typing your serial number into the field on the Reason-style 'back' of the unit (accessed by clicking the logos).

Half of RMIV's front panel is dedicated to 18 drum 'pads', each representing a slot that can be used to configure a sample, velocity-mapped stack of samples, or a drum synthesizer. Each pad is assigned to a single note for playback from a keyboard or the host sequencer. Additionally, mouse-clicking the pad will trigger the sound, with the nice touch of varied velocity depending on how far to the right you click. Clicking a pad's LED display causes the rest of the unit to devote itself to editing that particular sound. This is when you start to realise that the simplicity and sparseness of the front panel conceal the true flexibility and power of the instrument. The envelopes, filter, effects, compressor and 'varizer' (more on this later) are unique to each pad. In other words, each pad is literally a separate instrument, with none of the compromises and sharing of modulation and signal-processing resources you'd have to account for in an analogue synth, or most hardware drum machines. 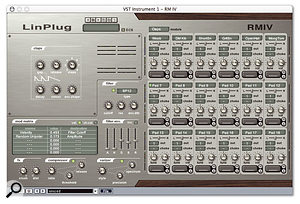 Although it only provides six controls, RMIV's clap synthesizer is surprisingly versatile.Above the pads is a module selector, which switches the currently selected pad from a sampler to a synth. Besides the sampler option, there are two kick synth modules, two snares, tom, open and closed hats, two cymbals, clap, and something called 'plop' to choose from. All the synth modules are based on classic analogue drum synthesis, mainly combining and shaping sine, pulse and noise generators. Unsurprisingly, then, the results are along the lines of early drum machines; if you want more realistic modelling then you should concentrate on using sampled waveforms as your starting point. However, if electronic and dance drum sounds are your thing you'll be in your element with this side of RMIV. Some of the synth algorithms are better than others, for example the extremely warm, fat kicks and toms, and the brilliant clap. The snare synth can do the business for certain sounds, but isn't that versatile. The hats are disappointing: mainly variations on pretty harsh noise bursts. The cymbal synths are great for producing some very nice delicate and lively harmonic tones, less so for harsh crashes. 'Plop' is useful for short percussive tones such as blocks, cowbells, triangles, or more far-out splats, clicks and bleeps. Even if you can't quite nail the sound you're after using the synth module alone, you still have the pad's envelope-controlled filter, mod matrix, and effects to further shape the basic sound.

Sound libraries are becoming an increasingly important factor in sampling products. In fact the industry has recently seen a shift in emphasis, with some libraries being sold where the sounds take top billing and a player is included 'free'. With RMIV, the instrument is still the main product, but the fact that the samples are provided in a proprietary format shows that they are a significant part of what you're paying for. Effectively they are copy-protected by the need to run RMIV. Other than its own format, RMIV can read kits from the earlier RM series, plus Steinberg's LM4, and CM505. Linplug are considering the Soundfont 2 format, but have no firm plans. This compatibility selection could be seen as a weakness, although Linplug say that when they've taken polls there has been very little demand for wider support.

The gigabyte of kits and samples that come with RMIV is divided into folders of acoustic drum kits, sampled electronics, percussion, 'construction' and miscellaneous. There's also a folder of kits that purely use the synth modules. There are tons of bright multisampled rock-style acoustic drums, often with four velocity zones, most of which are excellent. One let-down is that a few of the kits in the second acoustic folder suffer from some noise, and not-so-great editing resulting in the odd clicky end point. Mainly, though, the quality is very good. There's some very nice (mostly ethnic) percussion, although again one of the kits has a noise/edit issue and there could be more creative programming. The 'electronica' sees most of the usual suspects, including the slightly excessive five 808s and five 909s! There's some nice unusual material here too, like the Prophet and FM stuff. The construction and 'misc' kits have a whole bunch of sounds that should get you by in most forms of pop and dance music. Some kits have some really solid and inspiring stuff (the human beatbox is really fun), while others are a little half-hearted. Overall it's hit-and-miss, but then that's usually the subjective opinion with a library that covers several styles. 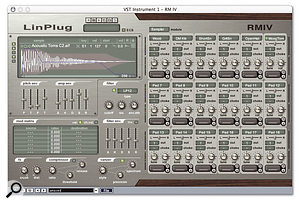 Editing the envelope of a sample in RMIV. The great thing about the synth modules is that they just present you with what you need to create the kind of sounds it would take a lot of time and effort to program with a generic modular synth. Take the ingenious clap synth, for example. This provides just six controls, which set up a small salvo of noise bursts. You can control the sonic properties of the noise generator, how many bursts there are and the gap between them. Doesn't sound great on paper, but results range from really authentic TR-esque claps to finger snaps and washboards. This design philosophy continues when you investigate the value ranges available for the parameters, and this goes for all the envelope controls as well. The ranges have clearly been selected for their suitability to percussion sounds so, for example, envelope attacks are limited to 0.5 seconds. This allows easier fine-tuning, whereas with a multi-purpose envelope on a general sampler all your useful settings might fall within a small range of travel on the control. However, to play devil's advocate for a moment, these design choices do mean that it's difficult to break the rules and produce extreme or unexpected sounds.

Selecting a pad and switching it to the sampler module brings up a whole new array of controls on the left of RMIV's front panel. The main display window lists the samples you've loaded into the pad (you can have up to 30), and allows you to adjust basic properties such as volume, and start time. The velocity ranges that the samples respond to are also set here, allowing you to set up a multisample velocity map. When velocity ranges overlap, RMIV automatically crossfades between the samples. The sample display can be switched to view the waveform of any of the samples in the list. At this point there are many similarities with Battery, both visually and in terms of available parameters. The sample can be shaped using the pitch, amp and filter envelopes, with visual feedback being overlaid in the sample display window. Adjusting the pitch envelope actually warps and stretches the waveform, while the amp and filters are shown as superimposed graphs. The envelopes are five-stage, having a Hold time between Attack and Decay. All the usual filter shapes are provided, plus a Band Reject for notching frequencies out. One difference compared to Battery is the lack of a loop function, but this is not really a big complaint. 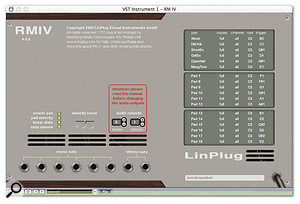 The 'back panel' provides access to a few housekeeping functions.I was able to load in Wave and AIFF files from my drive (RMIV can handle up to 32-bit files of various sample rates), although a fairly big irritation was not being able to audition samples from the file dialogue box. Instead, it's possible to shuffle through samples in a directory using arrows in the sample list, and Linplug point out that this provides a 'preview in context' loading method. Still, it'd be good to have both options. What is nice is the ability to cycle through whole kits during playback, much as you can with Redrum. Something RMIV's built-in file and kit management lacks is the ability to save individual pad setups, which you might want to do to share pad patches between kits. However, the host program should have some function in the VSTi window for this: Cubase handled it fine in my tests.

Effects-wise you have distortion, compression, a bit-reducer and the 'varizer'. Cleverly, keeping numeric value displays away from these modules saves screen space. Instead, when you're adjusting a control, the pad's LED switches to display the setting. The compressor has auto make-up gain, and when driven hard gives some warm distortion. The varizer is a great idea, allowing you to specify various types of random feel into each hit. The parameters are Style, Precision and Spectrum, although it's difficult to put your finger on what each is doing. The modulation matrix gives many more options to control and vary sounds, including two random generators.

RMIV is very quick and easy to use, has impressive, crisp, sound quality, and as a sampler has pretty much all the features you could need. It also has the fun-factor (or spaßfaktor, as they say in Germany), particularly with the synth modules. It's an exemplary piece of conceptual design, getting the best of the soft-synth format in that it takes the good bits of hardware equivalents without emulating the limitations. Having said that, I would really liked to have had a built-in pattern sequencer (I hate sequencing drums in MIDI sequencers). If you're looking for a genuine drum machine and sampler that's been built from the ground up for this purpose, then you really should try this out.

A seamless mix of sampling and synthesis, in a package suited to on-the-fly, hands-on programming. A piece of software that's as much fun to use as a hardware drum machine?