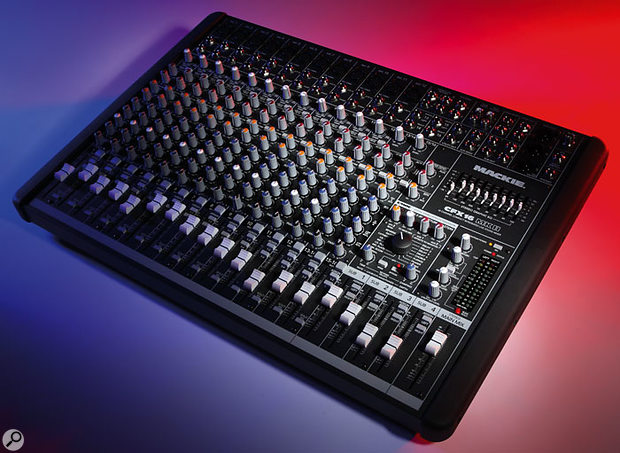 This compact desk benefits from built-in effects, sturdy construction and low noise. Does it measure up to the Mackie name?

Available in 12–, 16– and 20–channel versions, the Mackie CFX MkII mixer is primarily designed for use in small to medium live–sound systems, but has some potential recording applications too. Although compact, it is still spacious enough not to feel cluttered, and conforms pretty closely to what we've come to expect from Mackie, combining the familiar look and feel of the line with surface–mount circuitry, all–metal jack sockets, and a practical technical spec that offers better than adequate performance, but without the kind of stratospheric frequency response that might make the mixer more susceptible to interference in a live environment. The noise figures are low and the layout is both clear and intuitive. Although it's very similar to the original CFX model, the MkII version has a lower price, new rubber end–cheeks, upgraded controls and improved graphics.

We reviewed the 16–channel version of the desk, and before going further it's worth pointing out that, like most current small mixers, the input count of the CFX models is made up of both mono mic/line channels and stereo line–only channels, so, for the three sizes available, the mic–input counts are 8, 12 and 16 respectively.

Digital effects, mainly reverbs and delays, are built in, and although they're based on presets, two 'live' parameter knobs can be used to fine–tune them. This is a considerable advantage over those preset–only desks where most of the reverbs seem to be unusably long. However, I miss not having a tap–tempo button, and I feel that not being able to save your effect tweaks back to the preset with which they are associated is a bit of a missed opportunity, as it makes it very difficult to switch between effects during performance with any degree of precision, even if you write down the knob positions. On the up–side, the CFX mixers come with a 12V BNC socket for adding a gooseneck lamp, which I've found essential in many darker venues, and there's a nine–band graphic equaliser on the main output.

All the CFX casework is metal, with stylish protective end–cheeks, and Mackie have placed all the connectors on the top panel, for easy access. Power comes from the mains, rather than some awkward external adaptor. Insert points are provided for the mono input channels and for the main stereo output, but not for the busses. This won't affect most users, but where an anti–feedback processor is being used, it can sometimes help to patch it into a group insert point and then route only the vocals and acoustic instrument mics through that group. As the CFX's busses don't have insert points, you can't do that here. All the jack ins and outs, with the exception of the insert points and headphones, are balanced on TRS jacks, and the insert points are also conventionally wired tip–send/ring–return TRS jacks. The main outs and subwoofer outs are on balanced XLRs.

The layout of the mono channels starts out with the usual gain trim and low–cut switch (18dB/octave at 100Hz), but then departs from mainstream tradition by having the four aux sends positioned above the EQ section. The aux sends are arranged so that the first two may be switched pre–fade or post–fade as a pair, while the third is a dedicated post–fade effects send feeding the outside world, and the fourth is similar to the third but also feeds the internal digital effect section. The three–band EQ, with a swept mid section, has a range right down to 100Hz, which is really good news, as most don't sweep down nearly far enough. Shelving equalisers, at the usual 80Hz and 10kHz, look after the spectral extremes, all bands having a +/–15dB gain range. I find the lack of an EQ bypass function mildly vexing but this is probably less of an issue live than it is in the studio.

At the bottom end of the channel strip are the usual pan and fader controls, accompanied by a mute button and a pair of assign buttons for the two sets of busses (1/2 and 3/4). The Solo button is located near the bottom end of the fader and there's a big flashing Solo light in the master section (but none on the channel itself). In keeping with the compact size of the mixer, the channel faders are 60mm, rather than 100mm long–throw, but they're still large enough to be practical.

For the stereo line channels, the aux setup is the same but the EQ is replaced by a fixed four–band section rather than a three–band section with a swept mid, and there's no low–cut switch. Again, this is quite normal. On the three-band EQ the two mids operate at 3kHz and 400Hz — which is probably more useful for notching out what you don't want than for boosting what you do, although a very gentle 3kHz boost can add some useful presence to a dull mic. One thing to be aware of is that this isn't a 'four–buss plus stereo buss' mixer — everything has to route via subgroup 1/2 or 3/4 in order to find its way to the main output. The group (Sub) faders have assign buttons for routing them into the main mix, so at least one pair of faders must be routed in this way to get an output.

The master section is relatively simple, featuring a single stereo master fader and a pair of output meters that also display solo levels when a Solo/PFL button is depressed. Usefully, the meters are calibrated with 0VU equating to 0dBu, so that you know exactly what level you're getting. (If you're going into a +4dBu system, the meters need to peak at around +4, and correspondingly less for a –10dBv system.) Below the meters is the large, red, flashing 'Rude Solo' LED (designed to make absolutely sure you don't miss the fact that something is solo'd) and above the meters is the global phantom–power button. There's no bypass button for the nine-band graphic equaliser, but at least it has centre–detented faders.

As with most mixers, you also get a stereo 'tape' input and output with a tape return–level control, on unbalanced phonos to connect to the external device. This allows your gigs to be recorded to cassette or Minidisc and then played back through the mixer. There's also a nifty Break switch that silences the main mixer channels and enables the tape input, so that you can easily switch to pre–recorded music in the break between sets, without leaving the rest of the mixer live and vulnerable to tampering. Finally, there's a Utility output that comes after the main output faders but is equipped with its own level trim control. 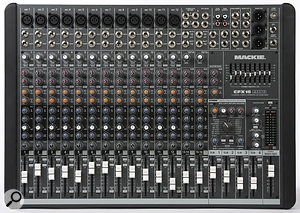 The 'master' connections panel, which includes the remaining ins and outs, plus a BNC lamp socket and a socket for connecting a footswitch to bypass effects.Each of the four Sub faders has Left and Right assign buttons for routing it into the main mix, as mentioned earlier, and there are also Sub output jacks that may be used for recording or other purposes. Master send–level controls also reside in this section, along with a balanced XLR mono subwoofer output, filtered to roll off above 75Hz at 18dB per octave. A single headphone amplifier, which delivers plenty of level into typical headphones, is fed from the main output or from the solo feed when a Solo/PFL button is down. However, there's no provision to switch the headphone monitoring to the pre–fade aux sends so that you could check the foldback mix, as you'd expect on a larger console. Furthermore, there are no solo buttons on the aux sends or returns, so you can't use those as a workaround.

The 32–bit effects section, as mentioned earlier, is fed from the EFX2 control, and there's a master effects input control with clip LED to ensure that the effects section isn't run too hot. An output–level control regulates the amount of effect output sent to the main stereo mix, with two further controls allowing the effects to be mixed independently into the Aux 1 and Aux 2 foldback outputs, for those who like to hear reverb in their monitors. A large knob dials up one of 16 effects types, which, other than Chorus, Flange and Phaser, are all reverbs and delays, including gated and reverse reverb options. Two buttons control the effect, one to bypass it and the other to enhance the stereo width of the stereo effects (not the delays or the phaser, which are mono), while two rotary controls allow the effect time and damping to be adjusted. Actually, these labels only relate to the reverbs — for delay effects, the damping control becomes the feedback control, and for the modulation effects it sets the modulation depth, while the Time knob sets the modulation rate. A footswitch jack is available for hands–free effect bypassing.

The reverbs offer a good choice of plates, halls and small rooms, and even a spring. In comparison with some of the other mixers I've tried that offer built–in effects, the quality of the CFX's offerings stands up very well, with lots of usable options. You can't call up combined reverb and delay programs, which some of the competition offer, but you can almost always come up with something suitable for any musical style. As mentioned earlier, my only concern was that as Mackie have provided editable parameters, it would have been nice if they were saved, so that next time you called up that preset it would be as you left it, rather than returning to its default setting.

In The Driving Seat

I've done some practical tests and small gigs with this mixer, and I look forward to doing some more. The sound quality is all you'd expect of Mackie, and the sensibly usable effects section is a big bonus, meaning that you're not stuck with dozens of unusable caverns and caves! Nine bands of graphic EQ may not be enough for surgical feedback reduction, but it does cope well with the worst of typical live–room anomalies and is a welcome inclusion.

For smaller gigs where your monitors mirror the FOH mix, the CFX MkII is fine, but the inability to switch headphone monitoring to the pre–fade send outputs, or to solo the aux sends, means that setting up a monitor mix with this desk will be somewhat hit–and–miss, relying entirely on feedback from somebody on stage, unless you set up an extra stage wedge next to the mix position — which is not the norm for smaller gigs. I'm pleased to see 12 mic inputs on this model, as my previous 16–channel mixer had only 10 and that was a bit limiting on occasions. The remaining stereo channels (two, in this case) are fine for feeding in keyboards, MP3 players, modelling guitar preamps and similar.

All small mixers have to be a compromise, otherwise both the size and selling price would run out of control. Given the price and quality on offer here, Mackie have done a good job in offering the small band all the essentials in a live mixer, although anyone with more sophisticated monitoring needs may need to look elsewhere. This is a pity, as adding just a couple more features would have elevated this from a good live mixer to a great one — and it's not without competition in this price range. For the pub and small club circuit, though, it hits the mark pretty much square–on.

When you buy a Mackie mixer, you have certain expectations, in terms of build quality and technical design, and this range of mixers meets those expectations. The CFX MkII mixers are fairly basic in what they offer but they are nicely built and well laid out, and they sound good. Their weakest point is their inability to monitor the foldback sends.