Although Renkus-Heinz is a well-known name in high-end PA components, it's not one often seen on the stages of more modest gig venues — but that may be set to change with the arrival of the new CF/CFX series.

These speakers are part of a new range of models from Renkus-Heinz, each available in a powered (CF) and passive (CFX) version. The entire range comprises PA cabinets with 6-, 8-, 12- and 15-inch bass/mid drivers, plus an 18-inch subwoofer, the choice of woofer in the case of all of the main speakers being augmented by Renkus-Heinz's novel Complex Conic Horn high-frequency unit. One attractive design feature of the range is that the passive models in the range have the option to upgrade them to active at a later date, by adding an amp pack in place of the rear connector plate. 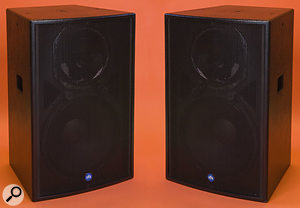 We had a pair of the 15-inch CF151s for review, and although they're just a hint on the large side their extra power handling and SPL capability more than make up for that. They also have a very respectable low end and can deliver a full-range 60Hz to 18kHz frequency response without the necessity of adding a subwoofer, although, of course, you could add subs for larger installations or touring systems. I was intrigued by the Complex Conic Horn design, as this is clearly circular, yet is engineered to provide optimal 90-degree by 40-degree coverage. For permanent installations it can also be rotated 90 degrees within the cabinet, in case side mounting is preferred. A two-inch titanium HF Driver powers the horn, and the complete system is rated in excess of 700W of program power.

I've no doubt that the Complex Conic Horn technology utilised in all Renkus-Heinz designs plays a large part in the sound quality of these speakers, particularly in respect of their good mid-range clarity. Many other two-way systems based around a 15-inch woofer really struggle in this area. The idea behind the Complex Conic Horn is simple enough: sound waves naturally expand as a spherical wavefront, so why try to force them down a rectangular waveguide, which introduces all kinds of distortions into the dispersion pattern at different frequencies? Simple conic horns aren't ideal, though, as they have equal angles of dispersion in both the vertical and horizontal planes, whereas the cross-section of the Complex Conic Horn appears to morph from an ellipse to a circle as the mouth gets wider, enabling it to produce a more usable directivity pattern. The designers claim that their design results in a cleaner sound than a conventional horn, avoiding the dispersion distortion inherent in rectangular horn flares.

The integral crossover of the passive CFX models means that bi-amplification isn't necessary, while the PF1 Class-D amplifier/signal processor fitted to the CF151 review system combines amplification, crossovers, speaker protection and system equalisation. Because the amplifier is Class D (see our feature on Class-D amplification elsewhere in this issue) and powered by means of a switch-mode PSU, it is relatively light and generates much less heat than a conventional class A/B amplifier. At high levels it is around 70 percent efficient and does not need a cooling fan, which is always welcome at quieter gigs. Another benefit of switch-mode PSUs is that they can be made auto power-sensing: this one can run between 90 and 260 Volts AC at 50 to 60Hz without the need to switch. Note, however, that the amplifiers are rated at a lower power than the speakers themselves: 200W RMS or 300W for short-duration bursts. Nevertheless, I found that the CF151 system proved to be capable of playing very loudly and cleanly.

Class-A/B amplifier: An optimum combination of the power efficiency of Class B and the linearity and low distortion of Class A. Class A/B is by far the most commonly used audio power amplifier.

Class–D amplifier: One in which the output transistors are operated, effectively, as switches, being either fully off or fully on, with the audio signal modulating (controlling) the switching action. Class D is very efficient, allowing smaller power supplies to be used. The 'D' is sometimes mistakenly said to stand for 'digital', when in fact it was simply the next letter in the alphabetical series after Class A, Class B (and A/B) and Class C.

Crossover: An electronic circuit designed to separate high– and low–frequency signals from each other so that each can be fed to speakers optimised for the role — ie. large and robust speakers for bass, small and light (and therefore fast) ones for high frequencies. If a crossover is placed between power amps and speakers (usually built into the speakers), it is said to be 'passive'. An 'active' crossover is used to divide signals before the power amps, so separate amps are then used for each band, further adding to efficiency. Crossovers can be two–way, just splitting highs and lows; three–way, adding a mid band; and occasionally four–way.

RMS (Root Mean Square): A calculation (using the square root of the average of the squares of a group of numbers) for obtaining the effective average voltage or current of an AC signal. Assuming the source is a sine wave, the rms value will be 0.707 times the peak value, or 0.354 times the peak-to-peak value (from full negative to full positive).

SPL (Sound Pressure Level): Sound level calculated in decibels compared to a reference sound pressure, commonly 20 micropascal (20 uPa), defined as the threshold of human hearing (0dB SPL). The human ear is capable of hearing an enormous range of sound pressures — the ratio of the sound pressure from the minimum up to damaging levels from even short–term exposure is more than a million — necessitating a logarithmic scale, which also corresponds roughly to our psychological perception of loudness.

Switch–mode power supply: A high–efficiency power–supply design that allows the PSU to be smaller and lighter for a given capacity.

The functionally unfussy cabinets, which are very nicely built from plywood, are trapezoidal in cross-section and finished in heavy-duty textured paint. The result is speakers that are strong but not excessively heavy (at least for their power rating!). Ply cabinets also tend to sound less coloured than moulded plastic enclosures, and are usually easier to stack in transit than oddly shaped moulded-plastic cabinets.

For installations, standard UMH (Universal Mounting Hardware) attachment points with No. 6 metric threads are fitted. With the amp pack in the 15-inch cabinet, the all-up weight is just a little over 70lb per speaker, and the overall size of the CF151s is around 29.5 x 19 x 17 inches. Standard 38mm pole-mounts are fitted into the bases of the cabinets, but you do need a friend to help you lift them on to the pole! 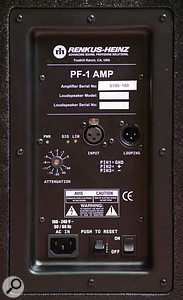 The PF1 amp pack fitted in the CFX151 speaker. An amp pack can be retro-fitted to the passive CF speaker models at any time, to make them active.There are no variable controls on the amp pack, other than an input sensitivity control adjustable with a screwdriver. The input XLRs come as a linked male and female pair, to make daisy-chaining multiple cabinets easy, and power comes in via a standard IEC connector and cable, which I really appreciate after having the Powercon cable for my own PA system go missing when nobody within a hundred miles stocks a replacement! The amplifier is rated with a sensitivity of 1.0V for its maximum rated power output and the drivers themselves are actually very sensitive, at 100dB (1W/1m). This produces a maximum SPL of around 129dB for the system. The two-inch HF driver has a rating of 40W RMS, 80W program, while the 15-inch 4Ω cone driver can deal with a massive 350W RMS or 700W of typical program material. If the system is forced to protect itself due to overload, there's an inbuilt safety trip that can be reset from the rear panel.

Back at the front, the drivers are protected from physical damage by a perforated metal grille, while sensibly-placed handholds are built into the cabinet so that one person can carry a speaker short distances with reasonable care (obviously, the smaller cabinets in the range would be correspondingly easier to manage single-handed). By putting one speaker into the back of the car facing forwards and the other facing backwards, I managed to get both into the back of a five-door Toyota RAV 4, although there was little space for much else, other than a slim mixer case or similar.

I tested the CF151s at a rather crowded, somewhat noisy pub gig involving a standard rock-band line-up with multiple guests, including a sax player, DI'd acoustic guitar and both male and female vocalists. The bass guitar was DI'd into the speakers, to prop up the small combo that the bass player was using, and the guitar amp was also mic'd. From the band's position, very little can be heard from the speakers, other than low end and lower-mid, which makes feedback management reasonably straightforward. Out front, however, the sound is surprisingly open and clean, with a well-defined and stable mid-range. The horns don't have the harshness of some systems I've tried and the dispersion pattern was just about ideal for the venue. Volume wasn't a problem for this system — it's not afraid of a little hard work —and feeding bass guitar through it didn't upset the vocal sound in any way I could detect. In larger setups, adding the sub would be an advantage if you plan to put bass guitar and kick drum through the system, but in small to medium venues they deal very well with such sources. The available level is a few dBs above what I get from my own Mackie SRM450s and there's noticeably better bass extension, but of course these are larger speakers, and they cost a fair bit more too.

Ergonomically, the CF151s are about as large as I'd like to entrust to regular speaker stands, and I did discover an annoying tendency for the speaker pole to jam in the slightly tapered pole socket. Other than that, two people can lift one on to a stand fairly easily, using the handholds provided, and because there are no sonic character switches to tweak, you just plug in and play.

Despite their size being at the limit of what I can fit into my car, I really like these speakers, as they give much more of a hi-fi sound than most of the systems I'm used to (with the exception of my Fohhn system, which also sounds gorgeous but is a few dBs shy of what this system can manage). The shape of the cabinets means that they are more likely to fit into your van or car than if they were rectangular, and the fact that they achieve a very decent low end without adding a sub counts for a lot at smaller venues. They're not cheap, but given their performance, both in terms of level and sound quality, the asking price seems reasonable, and you have the security of knowing you're dealing with a company that has been in the sound-reinforcement game for well over a quarter of a century. 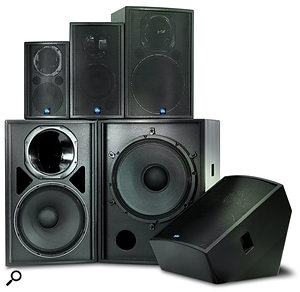