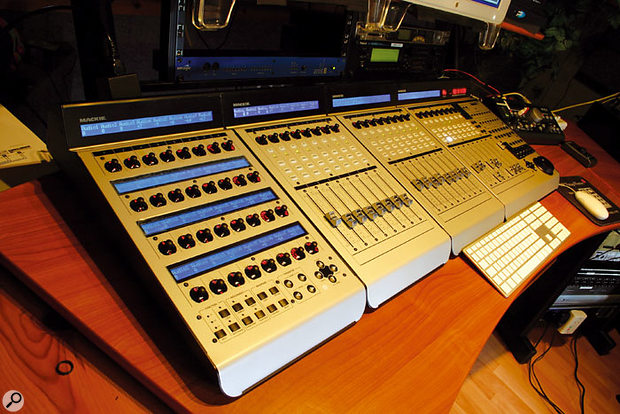 Mackie have updated their popular control-surface system. We find out what's new.

The original Mackie Control, which evolved from the earlier Logic Control, will be familiar to many DAW users, but it has recently been replaced by a MkII version called the Mackie Control Pro. The same modules are available as before — the Control Universal Pro master unit, the Control Extender Pro eight-fader expander module and the Control C4 Pro 32-knob controller — but although the functionality and control layout are exactly the same as before, there are some differences worth looking at.

The most obvious change is that the new units are silver rather than Mackie grey, and have a more steeply raked display section for better visibility. All the buttons and knobs have been redesigned along with the casing, and the front-to-back dimension of the units is now an inch or so less than before, so you get a bit more room on your desk for your computer keyboard. I particularly like the new more 'weighted' jog/shuttle wheel and the straight unit sides that let multiple units sit together in a far more visually appealing way than the rounded sides of the earlier models.

Perhaps the biggest practical difference is that you no longer need a separate MIDI interface to connect the units. The Control Universal Pro, the Control Expander Pro and the C4 Pro still have MIDI ports and can be connected the 'old' way if you prefer, but the Control Universal Pro also has a USB port, allowing it to be connected directly to your Mac or PC without requiring you to load any additional drivers. Three sets of MIDI In/Out ports have been added to the rear panel of the new Universal Pro, and these may be used to link to up to three expander units. In the unlikely event that you want to use more than three expanders, you'll need a separate MIDI interface. As before, each expander needs its own MIDI port — but if you don't need all three MIDI ports on the Mackie Control Universal Pro for expanders, they can be used to connect other MIDI equipment.

It appears that the motorised fader quality-control has been tightened up further, to promote better reliability and to avoid fader-calibration error messages. The external universal power supplies are also a little smaller, although they have the same output voltage and current rating as the originals.

The front-panel screening is still based on Apple's Logic software, with included Lexan (tough plastic) overlays for Pro Tools, Nuendo/Cubase, Digital Performer, Sonar and Tracktion. There are three different modes of operation, the first of which is Mackie Control Universal, offering direct support for Tracktion, Ableton Live, Sonar, Samplitude and Sequoia, Digital Performer, Reason, SAW Studio, Nuendo/Cubase and Adobe Audition. The second mode is a dedicated Logic controller mode, and the third offers HUI compatibility for use with all variants of Pro Tools. To change modes on both the main unit and the expanders you need to power each of them up while holding down the Select buttons on the first two channels. Your choice is then remembered until you change it.

After I first connected the system, I powered up each module and chose Logic as my operating protocol. The Mackie Control Universal Pro was recognised instantly but I just couldn't get the expanders to show up. After some head-scratching, it turned out that my MIDI cables (you have to provide your own) were too fat to properly fit through the holes in the Mackie Control rear panels, so I solved this by slimming down the plastic outer shell of the offending plugs with a sharp knife, to expose more of the metal part. This did the trick and allowed me to push the plugs fully home, which rectified the problem.

When connected via MIDI, you can power up the units in the order in which you'd like them to show up in your DAW, but when the master unit is connected via USB it obviously has to be switched on first, so that its MIDI ports will work. In Logic you can simply drag the icons of the controllers into the correct order in the Control Surfaces Preferences setup page, and this arrangment will be remembered once you quit Logic. Other DAWs have their own way of doing things, but the end result is much the same, enabling you to set up the units in any physical arrangement you like and to have that correspond with the way the units are seen by your DAW.

In all other respects, the operation of the units is exactly as in the MkI versions and differs slightly from DAW to DAW. The C4 expander is particularly useful, especially where a separate controller is needed to control plug-ins, as its 32 knobs and four display strips make it easy to keep track of what's being adjusted. Alternatively, you could have its knobs controlling the levels of 32 audio channels, or you can even configure it for tool selection or other frequently performed tasks. The C4 comes bundled with the C4 Commander software, as before, which facilitates 'drag and drop' C4 control mapping to your favourite MIDI hardware, plus you get a free version of Mackie's Tracktion 2.1 sequencing software.

These updated units are more or less the same price as the originals, and not needing a separate MIDI interface is definitely a bonus. Even though the competition has had a few years to catch up, the Mackie Control Pro is probably still the most elegant choice if you want an expandable DAW controller system at this price point.

The Tascam controllers that were the most obvious alternatives to the Mackie Control have now been discontinued, but the slightly more costly Euphonix Artist series of control surfaces or the CM MotorMate offer impressive facilities in a somewhat smaller footprint, albeit taking a slightly different approach. There's also the new Master Control combined controller and audio interface from Alesis. At the lower-budget end, you may like to consider the range of multi-fader/knob controllers from Behringer or the excellent single-fader controllers from Frontier Design and Presonus.

A practical and welcome update to a time-tested control-surface standard.