Mackie's DLM range of compact PA speakers has gained a subwoofer. We see how it fares as part of a full-range system.

Mackie's DLM12 and DLM8 dual-concentric speakers pack an enormous amount of power into very small, plastic enclosures, and they function well in stand-alone mode if you don't need them to handle deep bass. However, if you need a full-range system that is still physically manageable and will fit into most hatchback cars, the newly added DLM12S subwoofer might just be the answer.

Based around a single 12-inch paper-coned driver powered by a three-inch voice coil and ferrite magnetics, the sub takes the system range down to 35Hz, with a maximum SPL of 128dB at one metre. On-board DSP, with the same simple operating paradigm and bright OLED screen as the DLM series tops, includes crossover presets for DLM12s, DLM8s or Mackie's SRM series speakers, as well as the option to vary the crossover frequency to work with speakers from other brands. The sub level and polarity can also be set using these controls, and there's even the option to add time-alignment delay for use with delay stacks in larger setups.

As well as taking care of crossover duties, the DSP also looks after various safety aspects, to protect the driver and amplifier from excessive demands or wayward thermal conditions. Like the DLM mains, the DLM12S features a Class-D power amplifier capable of delivering 1000 Watts RMS or 200 Watts peak.

Built from 15mm poplar ply, the ported cabinet weighs a manageable 21.7kg, measures just 455 x 417 x 529 mm and is finished in a lightly textured black coating. It's styling matches that of the DLM series main speakers, including the powder-coated steel grille that wraps around the front corners to protect the driver. There are inset handles in both sides for lifting, and a pole-mount socket is fitted to the top of the cabinet — this taking a 'drop-in' pole, 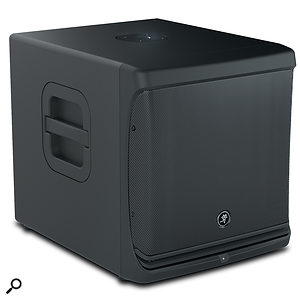 Caption not the screw-thread type. Shallow feet protect the bottom of the cabinet.

All the audio connections are on XLRs only ('combi' inputs would have been nice), and these comprise stereo ins, thrus and high-pass outputs. The low frequencies are summed to mono to feed the sub, while the high-pass feed and thrus are output in stereo. Adjustment is via four mode selection buttons on the recessed rear panel (Vol, Xvr, Dly and Mem) plus a pair of up/down buttons. Select Vol and the level of the sub is indicated in the display, with the up/down buttons being used to change the value. The Xvr button accesses a list of preset crossover frequencies for Mackie DLM or SRM speakers, or the variable mode, which allows you to set your own crossover frequency anywhere between 60 and 120 Hz. My tests were conducted with a pair of DLM8s as the main speakers, the preset for which has the system crossover set to 110Hz.

There's also the option to turn the front panel limit indicator LED on or off, and for setting the delay time, where the maximum value of 300ms corresponds to 337.8 feet or 102.9 meters. Up to three user settings may be saved or recalled at a later time via the Mem menu, which also includes the option to recall the original factory settings. A Control lock mode, engaged by pressing Mem and Dly at the same time, does as it says and locks out the controls panel to prevent inadvertent adjustment.

Mackie point out that the protection circuits are designed to safeguard the subwoofer under sensible operating conditions, but warn that reckless use (running flat out with the limit LED permanently lit, for example) may still cause damage — something that's true of just about any speaker system! The compressor/limiter arrests excessive peaks or overly high RMS levels and flashes a warning LED when close to limiting, which if flashing regularly means you should turn the level down. A 36dB/octave high-pass filter set at 32Hz and placed at the low-frequency amplifier's input attenuates excessively low frequencies that would otherwise stress the driver, and there's also thermal protection built in, with an automatic cooling fan that turns on as required. In the event that overheating still occurs (watch out for direct sunlight at outdoor gigs or hot stage lighting indoors when running close to maximum power), a thermal switch kicks in, muting the amplifier and setting the fan to its highest speed. A warning message on the display lets you know what 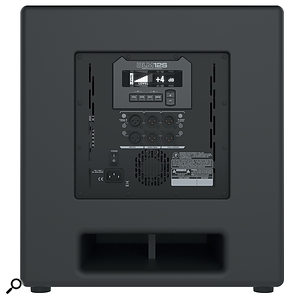 The rear panel houses all the input and output XLR connections, as well as the interface and menu screen for the built-in DSP. is happening, then when the amplifier cools down, the signal path is restored.

An 'FYI' (For Your Information) screen can be viewed by pressing Vol and Mem together, and this displays the software version, DSP version, amplifier voltage and current temperature.

Given that a 12-inch sub is never going to shift as much air as equivalent 15- or 18-inch versions, the DLM12S subwoofer packs a satisfying punch. The cabinet porting affects the tightness of the bass slightly, but that's an acceptable tradeoff in a small sub and the end result is still musically credible and solid, giving new life to the DLM8s used on top. I found that tweaking the EQ settings on the DLM8s cleaned up the lower mids in a useful way, so some experimentation may be needed for the best results, and as with most subs I ended up turning the level down by a few dBs from the 0dB position to achieve what I felt was a natural balance. In this configuration the sub was easily able to keep up with the tops, with enough power in hand to team up well with the larger DLM and SRM models.

Anything to do with loudspeakers is a compromise but, when it comes to balancing weight, size, performance and cost, Mackie have done a pretty good job here, and being able to throw a 3kW rig (6kW peak) into a small hatchback with the rear seats down, and still leave room for your guitar amp and guitars, is pretty impressive.

In this price range look at the likes of HK, Alto, Wharfedale and LD Systems. However, if you're using Mackie DLM or SRM speakers, having the crossover presets built in as a big plus.

A well-judged combination of portability and power, the DLM12S is also affordable, and has some useful DSP features that make integrating it into Mackie systems very easy.