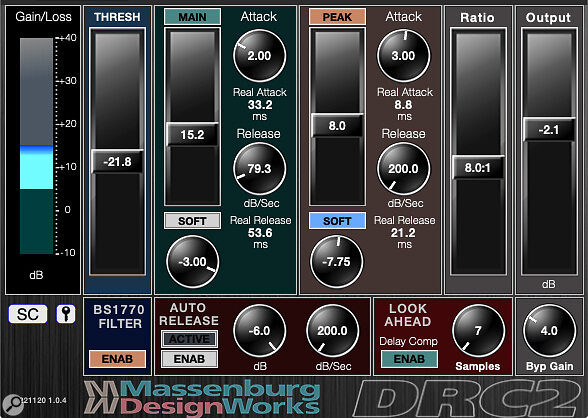 Having invented the parametric equaliser, engineer George Massenburg has spent many years researching dynamics processing, and his GML 8900 and 2030 hardware units are highly regarded in mixing and mastering circles. These are no longer available new, and will set you back a lot of money on the second‑hand market, but now there’s an alternative. MDWDRC2‑Native presents the latest and most advanced versions of George’s dynamics processing algorithms in a software plug‑in that will run in any native Mac OS or Windows DAW.

Massenburg Design Works are describing the DRC2‑Native plug‑in as “the worst best kept secret in audio processing”, because these algorithms haven’t been developed in isolation. Development versions have apparently been in circulation in the US engineering community for a number of years, and the release version incorporates not only George’s innovations but the insights of many studio legends.

One word that MDW don’t use in association with DRC2‑Native, though, is “compressor”. They are careful to call it a “dynamic range controller”, and it’s perhaps best thought of as a fresh attempt to tackle the same issues for which compressors were originally invented. Some of its controls employ similar terminology to those found on a conventional compressor, but their function can be significantly different. DRC2‑Native also employs some novel patented technologies to meet an overall goal of creating a plug‑in that detects and responds to musical dynamics in a way that’s closely aligned with human hearing.

DRC2‑Native is authorised using the iLok system, and you’ll need a physical iLok key, as cloud and computer licences are not available. This ‘early 2000s’ vibe is carried through into the user interface, which has none of the slick graphical features you’ll find in, say, FabFilter’s Pro‑C 2. It’s not much to look at, but in practice, it is fast to use and gives you all the visual feedback you need. I could wish that it was resizable, though, and apparently it soon will be.

One of the novel concepts employed in the design of DRC2‑Native is that of the ‘rotation point’. Plotted on a graph that shows input level on the X axis and output level on the Y axis, the transfer function of a hard‑knee compressor is a bent line: it rises at 45 degrees up to the threshold and at a shallower angle thereafter. As the knee value is progressively softened, the bend in this transfer function ceases to be a sharp one and starts to resemble a circular arc. The softer the knee, the larger the arc. In DRC2‑Native speak, the rotation point is the nominal centre of the circle to which this arc belongs. The Threshold slider in DRC2‑Native actually sets the position of this rotation point — meaning, unlike the threshold control on most compressors, it interacts with the knee setting.

The most important innovation in the design of DRC2‑Native, though, is something that Massenburg Design Works are referring to as Variable Exponent Averager. A simplistic description of a compressor is a device that can detect when audio is above a certain level, and turn it down. The turning down part is straightforward, but the detecting aspect much less so. Should our hypothetical compressor simply respond to the instantaneous level of the signal? Or should it respond to an average level integrated over a period of time? And if so, how should that average be calculated?

VEA is an attempt to increase the sophistication of this calculation, designed to make the level detection in DRC2‑Native more akin to the complex response of the human ear. The idea, in other words, is that gain reduction in DRC2‑Native is triggered not by the level rising above some arbitrary point, but by events that we would perceive as being subjectively louder.

This is achieved first by optionally filtering the side‑chain using the BS1770 filter, which anticipates the dynamic and timbral sensitivity of the human ear, and also by combining two separate detector timing algorithms. The Main detector uses a sophisticated RMS algorirthm to identify loud events on a relatively broad scale, but there’s also a second detector labelled Peak. This uses a different RMS calculation and would typically be set up using faster time constants, the idea being that it has the power to override the Main detector when a sharp transient event is detected. It’s important to note that these are not two separate dynamic control devices placed in series, like for example the compressor and limiter on a Neve 33609. They’re separate methods of analysing the side‑chain signal which are combined to trigger gain reduction in one device.

Most of DRC2‑Native’s controls are at least superficially familiar from conventional compressors, but many of them operate rather differently here. As previously mentioned, the main Threshold and Knee controls interact, and so do the time constants. Release time is calibrated in dB per second, as on the old dbx 160, and Attack simply runs from 1 to 8. ‘Real’ attack and release times are derived from their relative settings and reported. The range of most controls is also unusually large. It’s possible to set a ‘real attack’ time ranging from over 10 seconds down to 0.3ms, while the Ratio control runs from 1.2:1 right up to 100:1 and the Knee range is equally expansive. The optional Auto‑release setting is also highly configurable.

At the time of writing, DRC2‑Native includes no presets and has no manual (though one should be available by the time you read this). As a result, I did my share of floundering around blindly before getting a sense of how everything works. One feature that takes a bit of getting used to is the provision of both a Threshold slider and a Main Compressor Gain level slider. At first I wondered why both were necessary, but I think the answer has to do with the fact that the Threshold adjusts ‘rotation point’ and not threshold as it’s usually understood. Because this interacts so much with the Knee control, it’s useful to have a separate gain slider, but it would be nice to have the option to link the two; as it is, changes to either affect the overall output level and mean you’re constantly having to adjust the Output fader.

The threshold for the Peak section is set relative to that of the Main section, and can be anywhere between 0 and 18 dB above it. On a signal with lots of transient content, setting this slider to zero and the Peak Knee setting to very soft means the Peak detector overrides the Main detector much of the time; turn up the slider and/or reduce the Knee setting and it will take over only on the most violent peaks. All of this is indicated simply and effectively using colour‑coding: gain reduction triggered by the Main detector shows up blue, while the Peak detector turns it orange.

Although the controls are both wide‑ranging and unfamiliar, they are also quite forgiving. Putting the settings somewhere in the middle, as a general principle, sounds good on most sources.

The stated design goal behind DRC2‑Native is what might be called ‘invisible’ compression, and Massenburg’s blurb makes great play of its ability to apply lots of gain reduction without obvious artefacts. It’s worth noting, though, that you don’t have to use it like that. It’s quite possible to obliterate sources if you push it hard enough, and I had fun recreating that early‑2000s drum sound whereby you mix the kick and snare far too loud and then use a bus compressor to push them back down again. I should also point out that although the controls are both wide‑ranging and unfamiliar, they are also quite forgiving. Putting the settings somewhere in the middle, as a general principle, sounds good on most sources.

And yes, if it’s invisible — or rather inaudible — compression that you’re after, DRC2‑Native is almost eerily good at it, and nowhere more so than on sung and spoken vocals. You can apply 15dB or more of gain reduction without any pumping or other side‑effects. In fact, in many cases, it’s the presence of room tone or valve mic self‑noise that limits how much gain reduction can be applied, rather than artefacts directly related to compression. There’s no sense that DRC2‑Native is flattening out the sound or obviously changing its tone. It just gets, well, more even. I don’t think I would even describe it as ‘smooth’, because that implies imposing a character, which isn’t happening here. To deploy a slightly laboured analogy, some compressors act a bit like zoom lenses: they enable you to inspect things more closely, but you always know that you’re looking through one. Using DRC2‑Native is more like moving nearer the thing you’re looking at.

It will, I think, be a particularly attractive product for anyone working with dialogue and voiceover, but it’s hardly limited to those applications. Mastering engineers will find many uses for this plug‑in, and once you’ve got to grips with its unusual controls, it makes a deluxe option for general‑purpose compression at the mix, especially as it seems to have a pretty light CPU footprint. Yes, it’s expensive, and can feel counter‑intuitive if you’re used to conventional compressors, and no, it’s not pretty to look at — but if you demo it, you might find it hard to live without it.

DRC2‑Native is a genuinely different dynamics plug‑in that has a unique ability to iron out level variations without sounding like it’s doing anything at all.