McDSP's latest plug-in is an intriguing hybrid between an equaliser and a compressor.

Although there are countless EQs available, as well as numerous plug-ins offering multi-band dynamics processing, dynamic equalisers are still relatively thin on the ground. A multi-band compressor typically divides the entire frequency spectrum into two or more bands, each with its own attack, release, threshold and ratio controls. This enables it to do a lot of useful things, from subtly altering the tonality of a mix to de-essing or controlling an uneven low end, but it remains a 'broad brush' processor for the most part; and the higher-order filters used to split the signal into separate bands tend to affect the sound even when no compression is taking place.

McDSP's new AE400 'active equaliser' takes a rather different approach to frequency-conscious dynamics processing. In its most basic application, it can be used as a conventional four-band parametric equaliser; enabling the dynamic or 'active' element allows the amount of gain applied by each band to vary with the level of incoming signal. The only splitting of the input signal into separate frequency bands takes place in the side-chain, meaning that there are no high- or low-pass filters in the audio path and hence none of the phase shift that can blight conventional multi-band compressors. 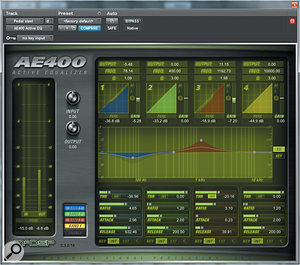 Like McDSP's other plug-ins, AE400 is authorised to iLok. It is one of relatively few plug-ins available in the AAX DSP format for Pro Tools 11 HDX, and is also available in AAX Native (in both cases on Mac and Windows) and Audio Units platforms. And like many conventional equalisers, it can be set up either by moving controls or by dragging points around on a frequency graph. In this case, left-click and drag lets you set the gain and centre frequency of an EQ band, while right-clicking and dragging adjusts bandwidth. Although everything is laid out fairly logically, the interface feels a little cramped to my way of thinking. I couldn't find any way of zooming the frequency graph, for instance, and as it is, movements of a couple of pixels either way correspond to fairly large changes in frequency or gain. It is certainly not as user-friendly as FabFilter's innovative Pro-MB multi-band processor, with its large FFT display, tooltip help and inviting click-and-drag parameter setting.

Each of the four bands has conventional threshold, ratio, attack and release controls, which are set using sliders, by entering numerical values, or by clicking and dragging within the small graphical representation of each band's transfer function in the small square boxes above the frequency display. These operate just as they would in a compressor, and their potential is greatly extended by a handful of additional features. A Gain slider lets you specify a maximum amount of attenuation (or boost) that can be applied by each band's dynamic process, while the Inv[erse] buttons next to each threshold slider switch individual bands to apply upward expansion rather than conventional gain reduction. It's also possible to set each band individually to be keyed from an external side-chain signal, and to link the controls of multiple bands. 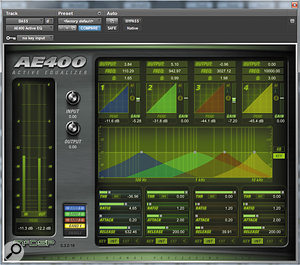 When I began using AE400, I tried employing it in situations where I would normally use a multi-band compressor. I felt that a plug-in such as Pro-MB had the edge in most of these cases, being easier and quicker to set up, and more flexible in some ways — for example, it allows you to unlink each band's side-chain filtering from the frequency range covered by that band. However, I soon realised that AE400's real strengths lie in tasks that can't be addressed using a conventional multi-band processor. For instance, the width of individual bands within AE400 can be made extremely narrow. This means that you can target very specific issues such as sporadic feedback in a live recording, or a rogue resonance that happens only on certain notes, applying deep notch EQ only at the moments when the problem occurs. Or suppose that an otherwise good-sounding snare drum is ringing too much for your tastes; with AE400, you could zero in on the frequency of the ringing, and use a slow attack to attenuate it gradually after each hit.

AE400 also makes a capable de-esser, with the advantage that you can use several bands to target different problem frequencies, and like Pro-MB, can be a great help when it comes to making a spectrally uneven source more consistent. In live recordings, for instance, singers who deploy exaggerated microphone technique might give you a consistent level, but the tone of the recorded signal will change drastically as they move around. Frequency-specific dynamic control applied to the low mids can help to even this out and, again like Pro-MB, AE400 can apply such control only when needed, without unappealing phase shift degrading the sound.

There were, admittedly, a few respects in which AE400 frustrated me. As I've already mentioned, the interface feels rather too compact for comfort, and I often found myself wishing for better visual feedback about when dynamic control was taking place, and how much gain reduction it was applying: at present, the only visual indication of gain reduction is the movement of a not-very-animated white line in the frequency graph. I would also have liked the option to switch the outer two bands to a shelving response; this is particularly useful in mastering, where you want to emphasise the bass or 'air' bands while still keeping them under control.

However, these are relatively small gripes, and none of them prevented me from getting good results. In the review period, I found plenty of uses for AE400, and in some cases, it allowed me to do something that simply wouldn't have been possible with any other plug-in I know of. AE400 can act as a conventional equaliser, and its functionality overlaps to a certain extent with that of a multi-band compressor, but ultimately it has its own raison d'être, and considered as such, is a useful tool.

Despite being very useful processors, true dynamic equalisers are thin on the ground, and McDSP's AE400 is a welcome addition to the available options.