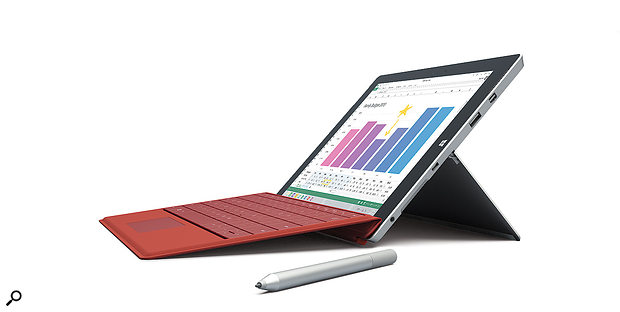 The Microsoft Surface 3 with optional Surface Pen and Type Cover.

The Surface 3 is the latest tablet–that–can–replace–your–laptop from Microsoft. It’s the baby brother of the Surface Pro 3, and the first non–Pro Surface to run full Windows 8.1 rather than the RT variant that powered previous generations. This is because the Surface 3 features a quad–core Intel Atom x7 processor running at 1.6GHz, rather than an ARM–based SoC (System on a Chip) as employed in the Surface RT and Surface 2, and other tablets like the iPad.

The only significant change design–wise is that the Surface 3’s kickstand offers three fixed positions, rather than the fantastic multi–position kickstand featured on the Surface Pro 3. This is a shame, but is apparently due to Microsoft trying to keep the cost down. Something else the Surface 3 lacks, though, is rather more welcome: there’s no fan.

Considering the Surface 3 purely as a tablet, its hardware stacks up pretty well against the iPad Air 2. Both entry–level models are priced at £419$499 (the iPad Air 2 starts at £399$499) and feature 2GB of memory; but where the iPad Air 2 offers just 16GB of storage, the Surface 3 has 64GB. Now admittedly, the full Windows operating system takes up a hefty chunk of this (far more than iOS), but you’re still left with 36.7GB for your own apps and data. And should that later prove not to be enough, Surface 3 features a Micro SD card reader behind the kickstand, enabling you to expand the storage of the device. There’s also a full–size USB 3 port and a Mini Display Port, and since the device is charged via a Micro USB port, this can also be used as a standard USB port as well.

In terms of raw performance, the Surface 3 achieved a 64–bit multi–core score of 3412 in Geekbench 3, which surprised me in being quite a bit less than the iPad Air 2’s more impressive 4418. (My i5–based Surface Pro 3, by comparison, scored 5645.) However, in use, the Surface 3 felt relatively snappy, whether running modern apps or older desktop applications.

Until recently, the biggest down side to Windows–based tablets was that the available music apps were lacking. However, the Surface now has a killer music app in the form of StaffPad (reviewed in SOS June 2015), which runs fine on the Surface 3. Indeed, one of the improvements listed in a recent update was indeed “performance enhancements for Surface 3”. But in order to use the app you’ll need to purchase a Surface Pen (£44.99$49), which is more or less required to get the most out of the device. I understand Microsoft are trying to hit a specific price, but omitting such an essential accessory is a bit annoying, especially when all other ink–capable Surfaces have included pens as standard.

I really like the Surface 3: the form factor feels great in your hands, and the fact you’re holding a device that’s small, light, silent, and able to run a full copy of Windows is kind of incredible.

Besides StaffPad there’s also FL Studio Groove, which seems more sophisticated than FL Studio Mobile (the company’s mobile offering for iOS and Android), Recording Studio Pro, which seems like a poor man’s GarageBand, a few dodgy instrument apps, and, um, that’s about it. It’s a real shame that music and audio developers haven’t embraced Windows tablets in the same way they have iPads, but it’s perhaps inevitable given Apple’s tablet market share, and also the fact that Apple have been better at giving developers suitable technologies with which to develop feature–rich music and audio apps.

The Surface 3 isn’t just designed to run tablet–oriented apps, however: you can also run standard desktop Windows programs as well, such as Sibelius, Live, Cubase, Reaper and so on. As with all Surfaces, Microsoft sell a Type Cover designed for the Surface 3, and this can also be considered a required accessory if you want to use a Surface as a laptop. The third generation of Type Covers are the best they’ve ever been, and while certainly not providing the best keyboard or trackpad you will ever use, to put it kindly, they are at least usable. The Surface 3 Type Cover is available in a variety of colours from Microsoft for £102.99129.99.

Since I was writing this review at the same time I was reviewing the latest version of Sibelius, I tried installing it on the Surface 3 as well as my Pro 3. The entry–level Surface 3 easily meets Avid’s minimum requirements — 64–bit Windows with at least 1GB of memory and 1GB free hard disk space — so the program ran remarkably well. With the Orchestral demonstration song loaded, I was using 1.3GB of memory and was able to play the score back with the basic sound set. One of the new features in Sibelius is the ability to make use of the Pro 3’s pen for manipulating notes and annotating scores, and this functionality works just the same on the Surface 3 (assuming you buy a pen).

If you’re planning on purchasing a Surface to run Sibelius (or even StaffPad), I’d recommend skipping the entry–level model and opting for the more expensive one that offers both double the memory and storage — 4GB and 128GB respectively — for £499$599.

I really like the Surface 3: the form factor feels great in your hands, and the fact you’re holding a device that’s small, light, silent, and able to run a full copy of Windows is kind of incredible. The Surface 3 and, of course, the Surface Pro 3 are arguably the best tablets for those working with notation; but, aside from that niche, it would be hard to recommend the Surface 3 for other music and audio related tasks. For one thing, while the Surface 3 is just about powerful enough to run Sibelius, it would begin to struggle with more audio–intensive programs. If you want to run those on a Surface (or need more power in general), you’d be better off purchasing the Surface Pro 3.

Microsoft keep getting really close with the Surface concept, and with more new applications like StaffPad, and more companies supporting the pen technologies in existing applications like Avid, I look forward to the day when I can recommend these devices unreservedly.