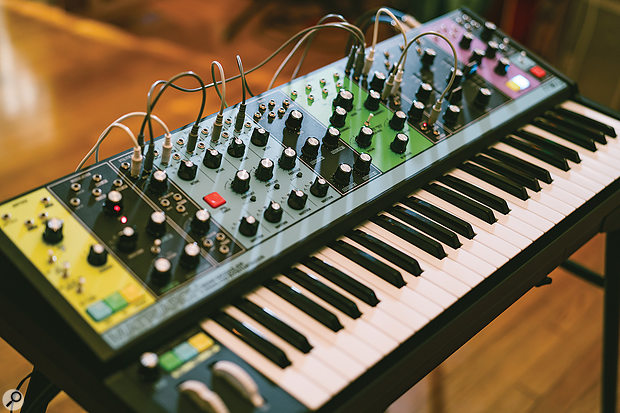 Much more than just an expanded Grandmother, the Matriarch has all the makings of a classic Moog synth.

Two years ago Moog launched the Grandmother — a fine entry-level monosynth with a name that we've learned to live with. But, even then, the company were thinking about adding a more powerful instrument to the range, and I was asked how I would enhance Granny to create a flagship synth for the post-Voyager era. Apart from insisting that it not be called the Great Grandmother, I suggested that it would need a wider keyboard with aftertouch, plus obvious upgrades such as more oscillators, more powerful filtering, a second contour generator and improved modulation. But I also made a right pain of myself by banging on about additional mixers and patchable VCAs because, in common with other semi-modular synths, the Grandmother has far too few of these (zero in this case), which can prove limiting until you connect it to a modular synth. Happily, Moog listened and, when I received the final rendering of the Great Granny concept — by this point renamed the Matriarch — it promised all of the above and more.

If we ignore its paraphonic capabilities for a moment, the Matriarch is a powerful monosynth with four oscillators, twin 24dB/oct filters and two output channels, each of which comprises a VCA and a delay line. Shaping and modulation duties are undertaken by twin contour generators, two LFOs, and three patchable VCAs. Moog are keen to emphasise that its signal path — and therefore its sound — is determined by the historic modules on which it's based. The oscillators are distant descendents of the Moog 921s found in many of Moog's modular synths in the 1970s, the mixer is based upon the Moog CP3, the filters are based upon the Moog 904a, the VCAs upon the Moog 902, and the delay lines upon the Moog 500 Series Analog Delay module. Of course, there's still digital stuff in the Matriarch because it supports MIDI and has a digitally implemented step sequencer, but the signal path and the lack of patch memories (which some people believe can interfere with a 'pure' analogue sound) ensure that it's a synth for purists as well as pragmatists.

Each of its oscillators offers the same selection of four waveforms (triangle, sawtooth, square and pulse), with PWM of both the square and pulse waves. They also offer the same octave settings ranging from 16' to 2'. (Global transpose of ±2 octaves is available in the performance panel.) Where the oscillators differ is that numbers 2, 3 and 4 have fine-tuning controls, the range of which can be set in the Global Settings, and each can be hard-sync'ed to the previous. In contrast, you can only tune oscillator 1 using the global tuning knob on the back of the synth. Each oscillator offers three CV inputs — pitch, PWM and linear FM and, while their PWM and FM inputs are independent, their pitch inputs are cascaded so that, if you apply a CV to (say) oscillator 2, oscillators 3 and 4 will also be affected by this unless their own inputs are used. The final socket offered by each oscillator is a signal output that bypasses the Matriarch's mixer. This means that you can have up to four audio signals passing down the internal audio path, and another four routed elsewhere as audio or as audio-frequency modulators.

The internally routed signals now pass through individual gates (which are necessary to make paraphonic playing possible) before reaching the six-channel mixer. The first four channels receive the audio from the oscillators or any signals presented to the patch inputs marked OSC1 IN to OSC4 IN, while a fifth channel is provided for the internal white–noise generator or the audio presented to the NOISE IN socket. There's also a sixth, knobless channel that accepts the input from the audio signal input on the rear panel. Like the CP3, it will mix audio signals and control voltages (or even a combination of these) and it distorts each channel at input levels above 12 o'clock or thereabouts, doing naughty things now deemed desirable such as thickening the sound or adding a bit of sparkle. It will also favour any channel with a disproportionately high signal level, suppressing the signals presented to the others. The summed output passes down the internal signal path but is also available from the mixer's Output socket so that you can direct it to other destinations as you choose.

Don't be fooled by its colour scheme; despite their visual similarities, the Matriarch is far more than just an expanded Grandmother.

The internal signal path now reaches the Matriarch's dual 24dB/oct resonant filters. You can configure these in three modes, and their outputs then feed two signal paths, each comprising a VCA and a delay line. In Series mode, VCF1 is a high-pass filter and VCF2 is a low-pass filter, and the output from VCF1 passes through VCF2, which then feeds the VCA1 and VCA2 paths equally. In Parallel mode, VCF1 is again a high-pass filter and VCF2 is again a low-pass filter, but any signal presented to the filter section's input is split to pass through them in parallel before...