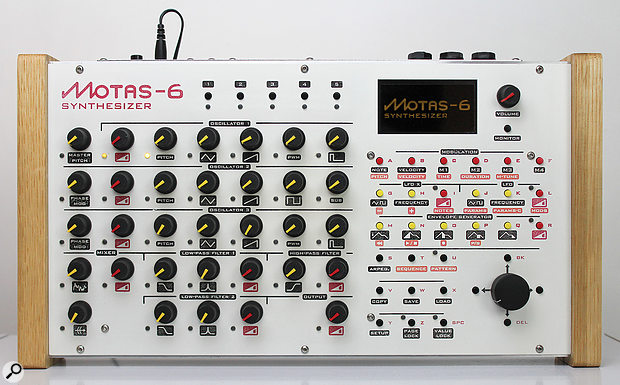 The Motas‑6 brings together the worlds of analogue and digital for a unique take on the classic three-oscillator, analogue monosynth.

Motas Electronics are a new company from the UK and their founder, Dr Jon Hayes, clearly loves building synthesizers. The '6' refers to this being the sixth revision of his pet project. Revisions 1-5 were never mass produced or sold to the public, but a peek at the Motas Electronics website confirms that they were fully formed and rather beautiful. Development started back in the early 1990s, when Jon first started tinkering with electronics. So with over 25 years of development, the Motas‑6 arrives as a fully mature and very capable synthesizer and Motas Electronics' first commercial venture.

At first glance the Motas‑6 looks like a conventional, high-end, three-oscillator monosynth: triple analogue VCOs, three filters, digital modulation system, MIDI and CV control, presets, an arpeggiator and a sequencer. All things you'd expect to find. But as we delve further it is clear that this synthesizer likes to do things a little differently. For example, there are no fewer than 37 LFOs with 50 waveforms each. That's one for each analogue parameter. There's analogue phase-modulation, which gives you Yamaha-like FM tones from analogue oscillators. Most exciting for me, however, is the vector morphing — on an analogue synth, by Jove!

The medium-sized desktop module, measuring 408 x 218 x 58 mm, has a reassuring ruggedness. The chassis is a combination of stainless steel and aluminium. The front panel comes in a choice of 'naked' stainless steel or, in the case of my review unit, white painted stainless steel. Both options look fantastic. On the front panel are 34 knobs, 37 buttons, a large rotary encoder, a bunch of LEDs and a 128 x 64 pixel OLED graphic display.

Round the back we find a 12V DC power socket, USB Type-B for class-compliant MIDI, conventional MIDI DIN in and out, four CV input sockets (on 3.5mm jacks), audio in, out and headphone outputs (all on quarter-inch TS jacks). 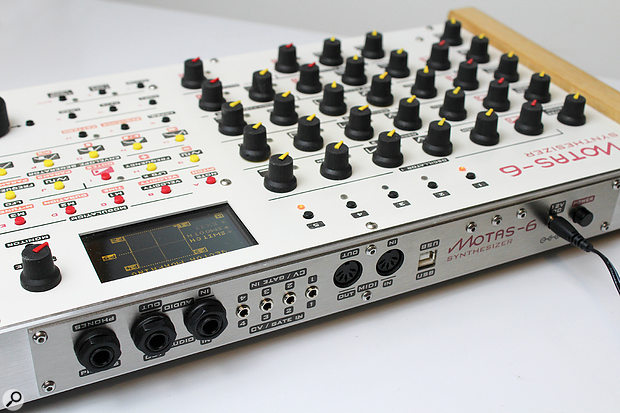 The Motas‑6 is a synth of two halves. The sound generation is purely analogue. A bank of potentiometers on the left deals exclusively with this side of things. If you want to tweak the filter frequency or change an oscillator's pitch, you just grab the front panel control and adjust it, much like any other analogue synth. The other side, literally and figuratively, is the modulation. This is generated digitally. The buttons and large rotary encoder on the right-hand side are dedicated to the task of generating and assigning modulation as well as managing presets and settings, with the sharp OLED screen keeping you informed at all times.

Combining the two approaches makes a lot of sense: analogue for the sound, digital for everything else. Under the hood is an Arm Cortex-M4 processor, which is more than capable of handling hundreds of modulation sources and destinations at once. The Motas‑6 offers you a dedicated LFO and envelope per parameter, which adds up to 37 LFOs and 37 envelopes. There are global sources too. Because they are digital, modulation sources can be far more complex too. For example, each LFO has 50 waveforms to choose from. Clearly, this is something no purely analogue synth could ever achieve. So, the best of both worlds.

Given that the Motas‑6 does things differently, it's worth explaining the workflow. You can of course load presets, much like any other synth — there are 10 banks of 50, for a total of 500 presets. But assuming you want to design a sound from scratch, you might start by tweaking some knobs to get a basic sound you like. As you tweak parameters, an LED will light next to the last knob you moved. It indicates which parameter is currently 'in focus' and the screen will update to show you the precise value of that parameter, plus any modulation assigned to it.

When you're ready to introduce, for example, an envelope or LFO, you hit the appropriate button on the right and the screen will focus around your chosen modulation source. The buttons are grouped into modulation types: pitch, velocity, M1-M4 (more on these later), LFO X (aka Global LFO), LFO (local) and envelope. There are often more than one button per modulation source. For example, there are three buttons for the LFO. Hit the Amount button, and use the data encoder to add some LFO to the parameter currently in focus. If you want to adjust the frequency or shape, hit the appropriate button and use the data encoder again. If there are additional parameters beyond the dedicated buttons, you can hit the right and left buttons found on either side of the data encoder to reach more pages.

It's a nice design because the most used parameters — in our example, LFO frequency, amount and shape — have dedicated buttons for quick access, whereas the lesser-used parameters — one-shot mode, LFO sync, etc — are further in the menu system. It's an easy system to grasp and quickly becomes second nature.

There are three analogue VCOs, plus a noise generator (pink or white). These are genuine voltage-controlled oscillators, not DCOs, and they sound great. Each oscillator has a slightly different feature set, and occupies a single row of controls on the front panel.

In effect, what you have here is a three–operator FM (cough, PM) analogue synth with a couple of algorithms. Obviously it can't compete with classic digital 4- or 8-operator synths in terms of complexity and flexibility, but it sounds both beautiful and instantly familiar — one of my favourite aspects of this synth.

The 6-pole low-pass has dedicated controls for frequency, resonance and output level, but accessing extra parameters via the data encoder and screen reveal a splendid level of complexity. You can choose from no fewer than eight inputs; Mix, LPF2, HPF, Noise, Pulse1, Sawtooth 2, Triangle 3 or Sub 2. You can also select which pole of the filter to tap the output from, effectively allowing you to choose the cutoff slope of the filter, from 1-6 poles. As if that weren't enough, you can even alter the resonance feedback source, either from Pole-4, Pole-6 or the high-pass filter. This is modular synthesis levels of flexibility in a desktop synth.

The second low-pass filter is a 4-pole design, inspired by the Roland TB-303 filter. It offers the same three physical controls as the first filter and similar choices for the input signal: Mix, Pole-1, Pole-2, Pole-4, Pole-5, Pole-6, Noise and HPF. The Poles refer to the outputs of the 6-pole low-pass filter.

The high-pass is the only filter which isn't resonant. It occupies two controls, frequency and level, and you can choose from the same input list as the second low-pass filter, with the exception of the last entry, which is switched to LPF2.

The breadth of routing options means that you can program many filter combinations. For example, you might use the main 6-pole filter as a standard low-pass, whilst adding the other 4-pole low-pass and high-pass together in series to create a parallel band-pass filter. Or perhaps you want to emulate a classic 303 acid line, but with an added high-pass in series. The ability to take the sound output from different poles, and even change the resonance attributes means that you can emulate just about any filter characteristic you want. For example, if gentle 2-pole SEM filters are your thing, the Motas‑6 gives you flexibility to achieve it.

For those who love a little feedback, the Motas‑6 has you covered. There's a quarter-inch TS external input on the rear which can be used to plug in another sound source into the mixer, and there's a dedicated knob on the front panel to control the amount. Without anything plugged into the input, however, the Motas‑6 will route its output back into the mixer. Remember that the external audio / feedback control has modulation capabilities just like everything else so you can, for example, have an envelope slowly increase the feedback level as a note sustains.

Overall, the filters sound excellent. There is enough flexibility that you can usually get the sound you want. The 303 filter sounds great. It doesn't scream in quite the same way as a real 303, but feed it a square or sawtooth waveform, add some envelope modulation and you could fool a lot of people. It would have been nice to have a proper multimode filter, or perhaps a resonant high-pass, but that doesn't stop this being an extremely powerful filter section, capable of anything from rough and rugged to subtle and sublime.