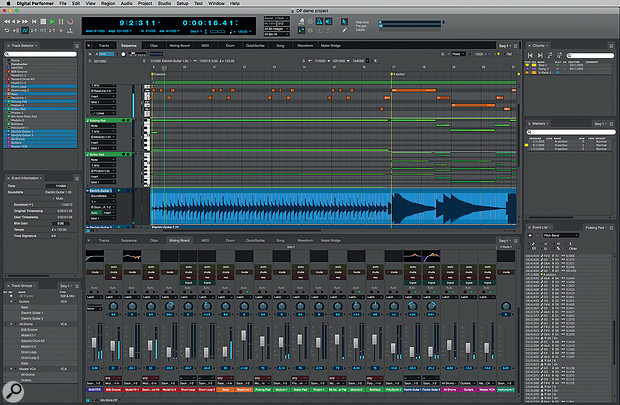 With a history spanning more than 30 years, it's hardly surprising that MOTU's Digital Performer has a mature feature set and a well-established reputation. Version 8 saw the previously Mac-only DAW make an impressive debut on Windows, while version 9, reviewed by Robin Bigwood in the February 2016 issue of SOS, beefed up the bundled virtual instrument collection. Unlike some DAW manufacturers, MOTU don't follow an annual update cycle, so the wait for DP10 has been a little longer than some would have liked. However, a significant and free further update to 10.1 took place while this review was in progress, confirming that their development team are still very much on the ball!

Has the wait for DP10 been worthwhile, and what does it now have to offer that might tempt both existing users, or potential new ones?

As SOS have covered DP's evolving feature set in many previous review and workshop articles, I'll focus here on the new additions and revisions in this release. However, for those readers unfamiliar with the DP platform, a brief summary will provide some useful context.

Like all the modern top-end DAWs, Digital Performer has an impressive, and very deep, feature set, with all the core functionality you need to make, mix, and even master music-based projects combining audio recordings and MIDI sequencing. What's more, it offers that functionality through a powerful user interface — built around its central Consolidated Window — that can easily be customised for different styles of working, or different tasks in the recording and mixing process.

At a general level, there are obvious parallels in functionality between all the popular DAW platforms. However, the detailed means by which that functionality is delivered can be very different. At that more detailed level, therefore, there are certain things that might persuade some users to prefer one platform over another. For example, DP was somewhat ahead of the curve in offering support for video playback and other features designed with film and TV composers in mind, and is still highly regarded amongst that user community.

Equally, there are areas where other DAWs might have an edge over DP. For instance, although it boasts a comprehensive bundle of audio processing and effects plug-ins, the built-in virtual instruments in previous versions could perhaps be described as 'good' rather than 'great'. Options for audio time and pitch manipulation were also less advanced than those of some rivals. So, have versions 10 and 10.1 addressed these deficiencies, and what else have they added?

Three years might seem a long wait for DP10, but this does feel like a substantial step forward.

It's About Time (And Pitch)

DP already had tools that allowed you to manipulate the timing of both MIDI and audio recordings. This included facilities for quantising to a fixed grid or to a groove, as well as the Beat Detection Engine, a very good algorithm for extracting beat and tempo information from audio with a rhythmic pulse. However, compared to some other top-end DAWs, DP's capabilities for time-stretching audio, and for automatically getting it to follow the overall project tempo map defined within the Conductor Track, were somewhat basic. 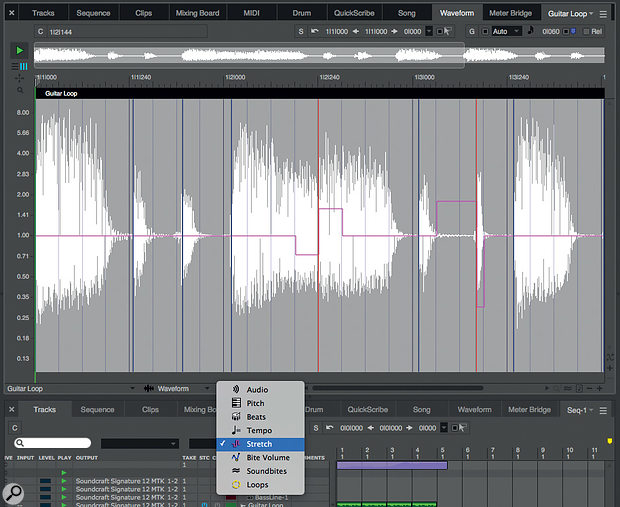 Regular DP users will therefore be pleased to see MOTU address this functionality within v10. There are undoubtedly numerous tweaks under the hood here, including the integration of Zynaptiq's state-of-the-art ZTX time-stretching and pitch-shifting technology. To the existing PureDSP algorithm, this adds two new modes the user can choose when applying pitch-shifting/correction: ZTX Formant-Corrected and ZTX Standard. Significantly, the ZTX formant-corrected pitch shifting can be applied to polyphonic material as well as monophonic — although, as with Celemony's Melodyne, the transparency of the results is very much dependent upon your source material.

Accessing this technology is aided by two significant changes. The Beat Detection Engine has been re-worked and given a v2.0 label with the aim of improving the accuracy of the detection but also streamlining its use. Perhaps more fundamentally, both the Sequence Editor and Waveform Editor now have a new feature called the Stretch edit layer. This allows you much more direct, hands-on control of transient markers within your audio; even better, it means that audio that has been subjected to DP's beat analysis algorithms can now automatically follow tempo changes within the overall project.

As before, in order to reduce demands that this audio manipulation might place on the host system, DP employs some background processing tasks that prepare audio for time-based manipulation, pre-rendering copies of any audio that requires time-stretching. Most users will simply want to instruct DP to automatically analyse audio for beat detection and to leave this background processing on by default but, if you like, you can configure exactly how this processing is handled using Preferences and Settings options.

There may be occasions when you'd need to delve deeper into the process in this way, but in practice, if you simply let DP handle all the beat detection in the background, the new tempo-matching process seems to work very well. I had no problems getting audio recorded within DP itself to follow tempo changes within the Conductor Track. Audio imported to DP that already contained pre-existing tempo metadata (Acidized loops, for example) also seemed happy enough to be dragged and dropped and to follow DP's tempo. For modest tempo shifts, the results were very impressive indeed, and I was also impressed with just how far I could push the tempo changes with some audio sources before things got beyond the 'usable' stage. Equally, if you need to adjust the automatic beat detection, or manually shift a beat to two within the Waveform Editor, that's now very easy to do.

Sensibly, as this new stretching technology can be enabled and disabled at the track level, it's easy to accommodate Soundbites (audio regions placed upon the timeline of an audio track) that you want to exclude from the automatic tempo-management processes. Sound effect or dialogue tracks are obvious examples.

While the beat-detection and time-stretching features could seem deep to the new user, DP's documentation is nothing if not comprehensive and, for routine tempo-matching duties, you can now pretty much leave DP on auto-pilot and it will get the job done. When it comes to addressing the few remaining 'weaknesses' Robin identified in version 9, MOTU have put a major tick in the box here.