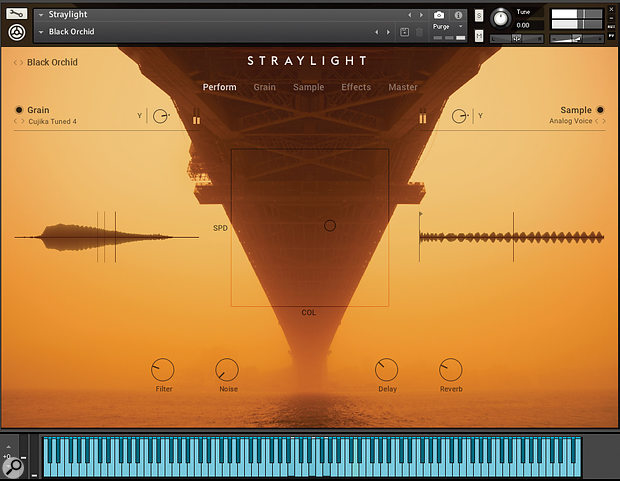 Native Instrument's Straylight is designed with media/film composers in mind and, by combining a granular synthesis engine with sample playback, Straylight specialises in soundscapes, transitions and ambient tones but can also do playable instruments. Musician/composer Paul Haslinger was involved in the design and, as well as spending a number of years as a member of Tangerine Dream, he has an impressive list of film, TV and video game credits. Straylight could therefore justify a genuine 'for film composers, by film composers' byline.

Kontakt/Kontakt Player 6.2 or later are required as well as around 3GB of storage space and a decent (Intel i7 or better) host computer. The engine is built around two sound sources — a granular synthesis module and a sample playback module — but also includes an impressive array of effects options and plenty of sound modulation possibilities.

The full control set is spread across five individual tabbed screens: Perform, Grain, Sample, Effects and Master. The latter four allow you to dig as deep as you might like into the engine to roll your own sounds. However, the streamlined Perform screen and the excellent collection of presets is a great way to start. Here, the granular and sample modules can be independently toggled on/off and volume balanced, you get access to an X-Y pad that's configured to modulate key parameters in each preset, and a few other key controls are also provided. If I was being picky, some of the controls could be slightly larger within the UI, but this is a minimalist front-end that is instantly useable.

You can expect to hear Straylight in a Hollywood blockbuster near you sometime soon.

If you are unfamiliar with granular synthesis, then Simon Sherbourne's article in SOS December 2005 issue (www.soundonsound.com/techniques/granular-synthesis) makes for an excellent introduction. Straylight's take on this offers plenty of possibilities without being too intimidating. Equally, the sample playback engine is well-featured. You can drag and drop your own samples into both the granular and sample modules; the possibilities are limited only by your own ability to exploit the engine.

However, before you get to the DIY option, you will have plenty of fun with those 450+ presets. These are organised into sensible categories and span atmospheres, playable keyboard-style sounds, leads, pads, pulses and a range of transitions and effects. In terms of mood and genre, the sounds are perhaps aimed more at horror, sci-fi or drama and, sonically, the sounds are excellent; you can expect to hear Straylight in a Hollywood blockbuster near you sometime soon. Yes, it's somewhat niche and, yes, access requires a suitably serious budget (and a suitably serious computer to host it). However, if you like to design your own sounds, Straylight provides an accessible and flexible way to do that... and it sounds great. Top-notch stuff.