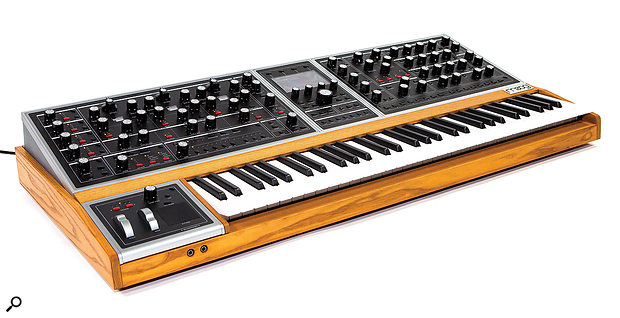 The Moog One is the most ambitious instrument the company have ever built. We put it through its paces in our world exclusive review.

As befits a large beast, the Moog One had a long gestation period but, when it appeared last year, it immediately evoked comments along the lines of 'my favourite synth of all time' from people who had never seen or heard it except on Youbook and FaceTube. Mind you, their enthusiasm was forgiveable because people had been clamouring for a successor to the Memorymoog for more than three decades. Was it worth the wait?

There are two models: an 8‑voice version and an otherwise identical 16‑voice version. Each voice is based primarily upon three analogue oscillators plus noise, followed by three analogue filters and an analogue amplifier. Each also has extensive digital modulation capabilities including three loopable contour generators, four LFOs and multiple FM pathways. Any number of voices can be played by a given 'Synth' (see 'Horses For Courses' box), and this adds a digital Synth Effect (an insert effect), a 20-slot modulation matrix, chord memory, an arpeggiator and a 64-step polyphonic sequencer. The Preset level then contains all three Synths no matter how many of them are in use, and adds a Master Effects section, numerous I/O and control capabilities, a Master Clock and noise reduction.

Beautifully designed within an equally resplendent case, the One's triptych control surface boasts more than 200 single-function controls. Every knob on the review unit was firm, every button positive in action, the layout is clear, and many of the frequency and timing knobs are scaled logarithmically, which is much more useful than labelling them from zero to 10. There's also a central control section with a large screen and encoders that provide access to a large number of additional voicing features, housekeeping and global functions.

Each of the oscillators in a voice generates two waveforms simultaneously and you can mix these freely, whereupon a static representation of the mixed wave is shown in the small OLED screen in each oscillator section. The first waveform output allows you to select between a saw/ramp/triangle hybrid and a sawtooth wave whose reset time (the vertical part of the waveform) can be varied from a rapid 6µs to a much gentler 1ms, softening the sawtooth at low frequencies and causing the wave to vary from a sawtooth to an approximation of a triangle and then a ramp wave at higher frequencies. The Wave Angle parameter that controls this can be a modulation destination, which provides some pleasing timbral modulations. The second waveform is a variable-width pulse wave. You can adjust this manually from a narrow pulse at one extreme, through a square wave, to a narrow pulse at the other. You can drive the width all the way from zero to 100 percent using pulse–width modulation. 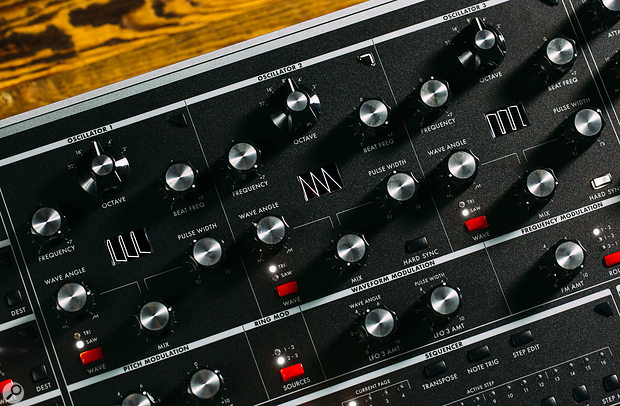 Moog One: Oscillators and Modulation controls.

Each oscillator offers five octave settings plus tuning of ±7 semitones and a constant offset of up to ±7Hz to create (at least, in principle) consistent beating across all pitches. Oscillators 2 and 3 also offer hard sync, synchronised by default to oscillator 1.

Underneath the panels containing the oscillators themselves you'll find four sets of controls that provide a bunch of options that, in Moog's view, are used often enough to justify physical knobs and buttons. The first is Pitch Modulation and contains two controls: LFO1 amount and a bipolar MOD EG amount, both of which affect all three oscillators equally. Next comes the ring modulator source select, which allows you to direct the triangle/sawtooth outputs of oscillators 1 and 2 or oscillators 2 and 3 to the inputs of the modulator. The third is called Waveform Modulation and its two controls allow you to direct LFO 3 to the oscillators' wave angles and pulse widths. Finally, Frequency Modulation allows you to modulate osc 2 using osc 1, or osc 3 using osc 1, or osc 1 using osc 3.

Pressing any oscillator's More button reveals another set of parameters: pitch tracking, Note-On Reset (key sync), independent amounts of Bend Up and Down, and Hard Sync Source (which allows you to override the default). In addition, there's a parameter in the Polyphony More page that allows you to add a random pitch shift to each note as it's played. I would have preferred that this be implemented per-oscillator rather than per‑voice but, either way, I'm not sure why it has been added to a synth with analogue oscillators. Nevertheless, if you feel that the One sounds too 'tight', a small Pitch Variance can make it sound a bit decrepit if that appeals.

The noise generator offers three spectral combinations red/white, red/purple, and white/purple — and allows you to mix between these pairs. You can then contour the noise amplitude using its dedicated AD/ASR contour generator. You can't have a long release here if the main audio VCAs have a short one, but a dedicated noise contour is great for creating things such as chiffs. This contour is also a source in the modulation matrix and its stages are available as destinations, which makes it a powerful addition to the other contours and modulators in each voice.

The next stage in the audio path is the audio signal mixer. This offers five visible channels (osc 1, osc 2, osc 3, the ring modulator and noise), while its More button reveals a sixth: external audio. By default this has a non-zero value so, unless you're planning to inject some audio into it, you should reduce its gain to zero. There are two input sources available (see 'Outside World' box) and you can select either, both or neither of these. The mixer has two output destinations — the State Variable Filter (SVF) and the Ladder Filter — and you can direct any of its inputs to either or both of these simultaneously.

Similar routing flexibility is available in the two filter sections, which you can configure to operate in parallel or in series. In parallel mode, a Mix knob allows you control the relative levels of the two signals. In series mode, you can still tap the output directly from the SVF, which means that (perhaps unexpectedly) the Mix knob allows you to obtain a mix of the signal filtered by just the SVF and the signal filtered by the SVF and Ladder Filter in series.

The SVF offers four modes (LP/HP/BP/BR) and you select between these using the Mode button. This means that you can't sweep through the LP, BP and HP modes as you can on (say) an Oberheim SEM. Consequently, I would describe this as a multi-mode filter rather than a state-variable filter. Resonance is provided, but none of the modes in the SVF will oscillate.

The two modes (HP/LP) of the Ladder Filter appear to offer 6, 12, 18 and 24 dB/oct slopes, and resonance settings of eight and above provoke oscillation in the low-pass mode. However, I noticed something very strange while experimenting with the HP filter; more low frequencies pass through it in 24dB/oct mode than in 6dB/oct mode, which is the opposite of what should happen. It turns out that, rather than being implemented in the usual fashion, the high-pass response is created by subtracting the low-pass filter's output from its input. If you do the maths of this, you'll find that the resulting transfer function (see diagram) is nothing like a conventional high-pass filter; it passes little signal below the cutoff frequency and the shapes of the slopes (which lie above rather than below the selected cut-off frequency) are completely different. You might like what you hear, but it's not doing what you think it is. 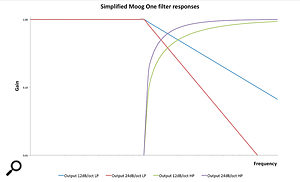 A simplified illustration of four of the One's Ladder Filter transfer functions.The final physical control in this section is a button that links the cutoff frequencies of the two filters. This is useful when you want to create patches with complex spectral shapes in which it's important that the combined response remains consistent while programming.

Below the filters' controls, you'll find a related panel called Cutoff Modulation, and this offers control over three pre-defined modulation paths that you can apply independently to the cutoff frequencies of each filter section. The modulators are the Filter Envelope, LFO2, and a source that you can choose in the More page. This page offers a visual representation of the filters (although the representation of the Ladder's high-pass mode is wrong) plus six additional parameters. The most important of these parameters splits the elements of the SVF into two separate filters called A and B, and allows you to determine the gap between them. The second most important is called SVF Series/Parallel, which, as its name implies, allows you to pass the audio through A and B in series or in parallel. These parameters hugely extend the range of sounds that you can obtain from the SVF. For example, when you separate elements A and B in band-pass mode, you don't widen the range of frequencies passed, you create two distinct pass-bands. If you want to programme formant-based sounds, this is part of the way to do it. The remaining four parameters in this page allow you to select the FM Source and the amount of key tracking for each of the filter sections.

The next stage in the signal path is the VCA section. This appears to be very simple — a VCA per voice controlled by knobs for level and pan. But this is misleading. The two knobs control the active Synth only, allowing you to balance and position it within the Preset. In addition, the ubiquitous More page adds a third parameter — Spread — for each Synth. This allows you create a stereo spread centred on the pan position, and very nice it is too. However, I also discovered a problem here; when you modulate the pan using, say, an LFO, you can create unpleasant thumps in the output. Use with care! 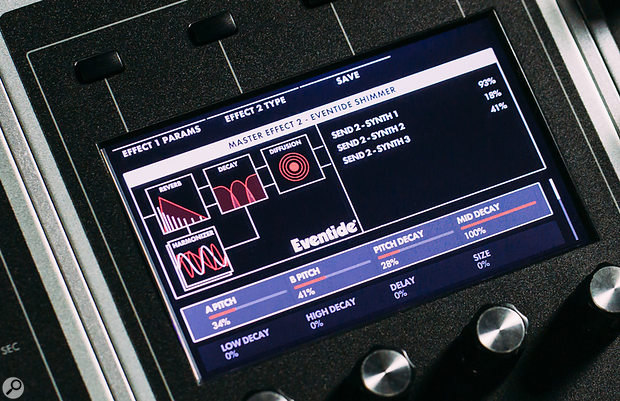 The final stage in a Synth's audio path is its digital Synth Effect unit. (If you are less tolerant of zeros and ones than I am, you can bypass this and the audio will remain in the analogue domain.) This has a single audio input and stereo outputs, but I didn't find the lack of true stereo/stereo effects to be a problem. Despite the manual describing 19 effect types, there are 18 (the Echo has gone walkabout), including a three-band resonator similar in concept to that found on the Polymoog, and a pair of vocoders whose modulators are derived from the external signal inputs. All of these offer a healthy selection of parameters in their More pages including, where appropriate, Master Clock synchronisation.

Each effect type has two parameters assigned to the knobs in the Synth Effect panel. By default, these are Mix and something that affects the significance of the effect such as Depth, Feedback or Resonance, but you can modify these assignments in the More page. This makes the knobs much more useful. Having programmed an effect you can name and save the result, whereupon it's added to the list of available presets.