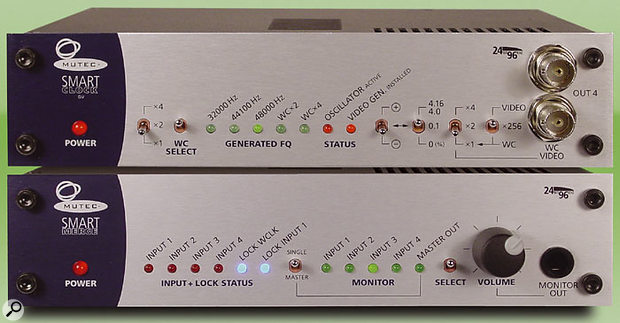 These two affordable problem-solvers facilitate digital interfacing and mixing in the home/project studio.

As the all-digital studio environment increasingly becomes the norm, the demand for digital clocking and routing hardware has never been higher. The two Mutec units under review here are designed specifically to meet these requirements. They are both half-width 1U units which can be rackmounted with an optional rack ear kit.

The Smart Clock is a compact but well-specified master word-clock generator, and there are two versions available: the basic model and an AV version. Both provide AES Grade 1 accuracy, meaning that they conform to the highest specifications with ±1ppm sample-rate accuracy. Jitter is claimed to be better than 20ps (RMS), which is an impressive figure, and the crystal oscillator is temperature compensated, 'burned-in' and 'pre-aged' to provide absolute reliability and accuracy.

The AV version of the Smart Clock incorporates a video sync generator module as standard, making it ideal for post-production studios where digital equipment has to be synchronised with video systems. The base model can also be retrofitted with the video module, if required. Internal switches on the video module itself select simple video black-only output or black burst video-sync pulses, and a second switch formats the video to either PAL or NTSC specifications. It may be important to note that the Smart Clock cannot be clocked from an external reference — such as house video syncs — so may not suit certain applications.

The Smart Clock's front panel is well laid out and pretty intuitive, with just six miniature toggle switches and eight LEDs. Moving from left to right across the panel, the first LED illuminates when the unit is switched on (via a rear-panel rocker switch). The first toggle switch selects the base sample rate — the options being 32, 44.1 and 48kHz — while the second toggle acts as a rate multiplier, with x1, x2 or x4 modes. The combination therefore provides any standard sample rate output between 32kHz and 192kHz, with the selected base sample rate and multiplier value being indicated on green LEDs. A pair of red LEDs illuminate to confirm that the unit is working correctly: the first relates to the internal crystal oscillator, while the second lights up when the video generator module is installed.

The next two toggle switches provide various pull-up and pull-down clock-rate options, which are used to correct for the speed variations that can occur when film is transferred to video, or when working in NTSC environments. The options are +4.1666 percent (25/24), -4 percent (24/25), +0.1 percent (30/29.97) and -0.1 percent (29.97/30), but if all this means nothing to you, don't worry about it, because it's only of relevance if working in a video post-production house that works with NTSC or film materials! Having said that, the addition of these facilities does make the Smart Clock suitable for a wider range of uses than simpler clock units.

The last two toggle switches are used to determine the clock rate output through a pair of front-panel BNC connectors. The first switch acts as a rate multiplier (offering x1, x2, x4 options) above the sample rate selected on the front panel. The second switch adds a x256 (Pro Tools Super Clock) mode and, if the video generator module is installed, can also switch the BNC sockets to output composite video sync pulses instead of word clock.

The rear panel carries six BNC output sockets, which can be configured in three pairs, plus a Toslink and coaxial S/PDIF output (mute audio), and an AES11 output (mute AES-EBU). The S/PDIF and AES-EBU outputs are restricted to a maximum sample rate of 96kHz. As mentioned earlier, there is no provision for an external reference input.

Inside the unit, each pair of BNC sockets has two associated slide switches. One selects either word-clock or video-sync outputs (the latter are only available if the video module is installed, of course). The other is a five-position slide switch, the first four options being word-clock multipliers, to give x1, x2, x4, or x256 the clock rate selected on the front panel. The maximum output clock rate is obtained with the front-panel switch set to 96kHz and the x256 mode selected for the rear-panel outputs — producing an output clock at a frightening 24.5MHz! With a front-panel rate of 192kHz selected, the x256 mode is disabled, but the x4 rear-panel option will produce a clock output at 768kHz. At such high frequencies, cable quality (and length) becomes critical, and Mutec recommend high-grade, well-shielded coaxial cables conforming to the RG59 specification, never exceeding a length of 10 metres.

The fifth position of the internal switches is labelled Smart Bus, and is essentially the x256 mode again, but with a preset amount of delay compensation applied specifically for use with Mutec's own word-clock distribution unit. In effect, the Smart Bus output is advanced relative to the Smart Clock's other outputs, so that the distributor unit's word-clock outputs remain in perfect phase alignment with the Smart Clock.

The arrangement of configurable output rates is very flexible, and although most people would probably leave the switches in their default positions, many will find it very useful to be able to configure one pair of outlets specifically for Super Clock, and another for double-rate clocking, perhaps, to suit the equipment in use.

The Smart Clock is an impressive unit, with superb performance and unusual flexibility. On a purely subjective test, substituting the Mutec unit for my usual Aardvark Aardsync, the quality and stability seemed to be to a very high standard, which makes its remarkably low UK price even more attractive. This unit is highly recommended for any digital studio requiring a reference clock source, and the AV version represents particularly good value for anyone working in the audio-for-video domain.

The Smart Merge can be operated in two ways. The first is to mix (at unity gain) up to four asynchronous digital stereo inputs into a single digital output. The 32-bit floating point processing incorporates a Dynamic Auto Levelling (DAL) function — essentially a peak limiter — which ensures that the peak output level never exceeds -0.5dBFS, even if four 0dBFS signals are input. This is intended to negate the need to continually watch meters or pre-attenuate input signals to create a headroom margin. The second operating mode is to route any selected input directly to the output — essentially a simple four-into-one router. The unit also incorporates a headphone monitoring facility with an independent volume control. With the unit in mix mode, the headphone monitoring enables independent monitoring of each input in addition to the mixed output. However, when configured as a router, the headphone monitoring selector also controls the output routing selection.

All four inputs accept any input resolution from 16- to 24-bit resolution, and any sample rate between 32kHz and 108kHz (accommodating varispeed sources if necessary). Output resolution is fixed at 24-bit, with no facilities to dither to a lower bit depth. The output sample rate is locked to the external word-clock input by default, but if there is no clock connected, then the output clock is derived from the sample rate of the first input channel. All four inputs accept S/PDIF-format signals via phono sockets, but, in addition, the first input channel is also equipped with an AES input on an XLR, and input two is doubled with an optical Toslink socket. The AES and Toslink inputs have automatic priority over their corresponding S/PDIF inputs. The output is provided only in AES format, on an XLR.

A pair of BNCs provide external word-clock in and out. The input termination can be disabled if required via a small slide switch located behind the BNC sockets inside the unit. The clock input automatically accepts both standard-rate clocks and the x256 Pro Tools Super Clock format. The word-clock output mirrors the rate of the external clock input. The unit incorporates an internal mains PSU, and the IEC inlet also incorporates a fuse holder and voltage selector, plus a power switch.

The Smart Merge controls are very simple and intuitive. A large red LED indicates when the unit is powered, and four further red LEDs illuminate when valid input signals are detected on each input channel. A pair of blue LEDs show which clock source is being used to control the output sample rate — the external clock or the first input.

A small toggle switch controls the unit's operating mode. In the Master position, all four inputs are mixed to provide a composite output, whereas the Single mode configures the unit to act as a routing matrix. To the right of this switch are a further five green LEDs and a momentary switch. Each press of the switch cycles through the four inputs in turn, followed by the mixed output, with the LEDs showing the current selection. The selected signal is normally output only to the headphone socket on the front panel, the volume of which is controlled by the adjacent rotary control. However, when the unit is configured as a router, the selected signal is also presented at the digital output on the rear panel.

The Smart Merge is easy to configure and operate, and does exactly what it says on the box. Although I was initially concerned about the automatic limiting facility, in practice it was a benefit rather than a hindrance. The ability to audition individual sources or the complete mix on headphones is also useful.

This is a rather unusual and specialised device, but the combination of facilities will find many applications, solving all manner of monitoring, routing and mixing problems in digital studios. The feature set is not unique — for example, the Roland M1000 provides similar functionality, with the addition of an analogue mix input and USB interfacing — but I can think of very few other products as versatile, and none with as small a footprint.

The Smart Merge can be used to address a variety of common studio requirements. For example, it could combine the returns from a number of digital outboard effects processors into a single FX channel on a digital desk. It could also be used as an input expander, enabling one of four sources to be selected to a single desk channel. Additionally, the Smart Merge can accommodate sample rate and format conversion, as well as interfacing asynchronous sources or devices which cannot be clocked from a master clock. Where such requirements exist, the Smart Merge offers a cost-effective solution.

A unique little box with many possible problem-solving uses when needing to select or mix multiple digital signals together, or convert formats and sample rates.