A range of affordable third-rack units designed to cover a variety of studio tasks without compromising on quality. 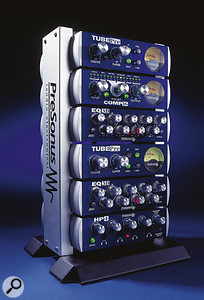 Photo: Mike CameronWith studios migrating from the rack cabinet to the desktop, the traditional 19-inch rack format is no longer the only way to present outboard gear. With desk space at a premium, small is beautiful, and PreSonus have made the most of this paradigm shift with their new range of 1U third-rack products. The range currently comprises four modules: a tube preamp, a parametric equaliser, a compressor, and a four-channel headphone amplifier, but rather than leave you to find some way to organise your new purchases, they've also come up with a rather neat miniature 'tower' rack system that can hold up to six of the units.

Finished with blue anodised front panels and curved cast-aluminium sides, the processors are powered from individual external PSUs (which were just too wide to fit next to each other in a typical plugboard) and are clamped firmly in pace within the rack tower. All are very attractively priced in the UK, yet in the main are based on circuitry developed for the more up-market PreSonus processors.

First out of the box is the disarmingly cute Tube Pre, featuring a low-noise mic/instrument preamp with switchable phantom power, variable tube drive, variable gain, phase and pad switches, 80Hz low-cut filter button and a suitably yellowed backlit VU meter with a curiously The X Files blue/green light. In addition to handling mic signals via the rear-panel XLR socket, there's a high-impedance (1MΩ) instrument input jack back there, and the unit has both balanced and unbalanced line outputs on XLR and jack respectively. Up to 20dB of tube drive is available, and while this may not be too subtle on vocals when cranked up full, it can work wonders when DI'ing instruments, so it's good to have it available. 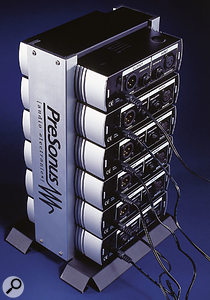 Each of the units requires its own external PSU, so things may get a little messy round the back of the units and at your mains plugboard.Photo: Mike Cameron

Distortion is quoted as just 0.05 percent at 0dB Tube Drive, while the noise is a respectable -98dB. The Tube Pre is mainly intended as a microphone preamp, and in this role it is quiet, transparent sounding and very classy for the price, even though it may sound less sophisticated in a direct shootout with my far more costly SPL Channel One. The tube drive can be used to fake a little warmth, and the result is sensibly subtle up to around half way around the Drive control, but the unit also works splendidly well as a DI box for guitar and basses. It is not recommended for keyboards, as the input isn't intended to take full line level, though keyboards with lower outputs can be accommodated without any trouble. Given its very low cost, this is a great little mic preamp/DI box that delivers a full, clean vocal sound bolstered by a little contrived warmth if required.

Good digital equalisers are not always available in the virtual domain, so the PreSonus single-channel EQ3B clearly has a place. Offering three fully parametric bands with overlapping frequencies, the unit also has a high-pass rumble filter, with an 80Hz cutoff frequency, and a bypass button. All three gain controls have centre detents, and the frequency ranges are marked on the front panel: 20Hz-300Hz, 200Hz-3kHz and 2kHz-20kHz respectively. The available gain range is ±12dB, and the Q value is variable from 0.1 to 10. The quoted THD + Noise (unweighted) is a low 0.006 percent at 0dB, with a noise floor of -98dB equating to a signal-to-noise ratio of better than 95dB. Located on the rear panel, the I/O is on both unbalanced jacks and balanced XLRs.

I found this equaliser to be extremely competent, especially on voices, where it could be used to add weight and sizzle without interfering with clarity. As with all good equalisers, you only needed to add a decibel or two of boost in the required areas, though deeper EQ cuts are often needed to subdue unwanted peaks or resonances. Again, given it's reasonable price, this is a very well-behaved and sweet-sounding equaliser.

Compressors with presets are becoming more common, and although I have reservations about the use of presets, PreSonus have done a pretty good job. The circuitry of this single-channel unit is based on the Blue Max design and is operated via sixteen presets that set up the required values for attack, release, ratio, threshold, and knee, leaving the user only to adjust the input level knob to set the amount of compression. The moving-coil meter can be switched to show the output level or the amount of gain reduction, while a rotary switch selects the required preset, all of which are listed on the front panel along with status LEDs to show which one is currently operating. The preset types cover voice, percussion, fretted instruments, and keyboards, with settings for limiting and special effects. As compression always depends on the programme level, the input gain control must be adjusted to provide the desired degree of gain reduction.

The input gain may be varied over a ±20dB range, as may the output, and the I/O is on both unbalanced jacks and balanced XLRs. The noise and distortion spec is very similar to that of the equaliser and, like all the units in the range, the physical size is 5.5 x 5.5 x 1.75 inches. 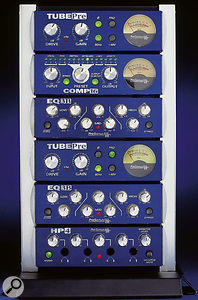 Photo: Mike CameronI tested the presets on a number of sources and, for all routine jobs, they were fine. There are several choices of each type, so by selecting the most suitable one and then adjusting the input level to give the required amount of gain reduction, it's easy to get a good sound. Again the unit is particularly effective on vocals, where it adds just a hint of character, while keeping the level under control and at the same time preventing the sound from becoming dull. A full manual option would have been nice, but given the design brief and price of this unit, I can see that it wouldn't have been practical for both space and cost reasons.

Last in the series is the HP4, which has stereo inputs and outputs on rear-panel jacks to allow it to be inserted in series with a studio monitoring chain. The signal also feeds four high-power headphone amplifiers, but a nice touch is that the stereo monitor output on the rear panel can be adjusted in gain or muted from the front panel. This is ideal for anyone working with active monitors in a mixerless environment. The headphones are normally fed with stereo signals, though the system may also be used in mono by using the front-panel Mono button. Multiple units may be daisy-chained via the rear-panel monitor links where more than four headphone feeds are required. Each phones output, which is on a front-panel quarter-inch stereo jack, has its own level control and is fed from its own 150mW amplifier.

This little box does exactly as claimed and delivers enough level to suit most types of headphone, both low and medium impedance. There's no obvious background noise and the sound quality is at least the equal of other built-in headphone outputs. I liked the simple monitoring control option, and though there are other equally good headphone amplifiers out there at comparable prices, the HP4 is the obvious choice if you've bought any of the other modules in the series. 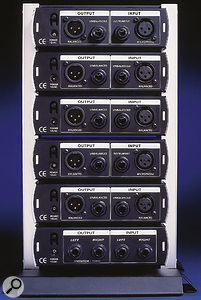 The rear panels of the four units in the range (top to bottom): Tube Pre, Comp16, EQ3B, and HP4.Photo: Mike CameronAll these PreSonus boxes work rather better than you'd expect from their modest cost, and I was particularly impressed with the mic preamp, which to me sounds best with modest drive levels, where the tube makes subtle contributions to the tonality. Having an instrument DI facility also makes it useful for DI'ing guitars, basses and acoustic guitars with pickup systems, where you want an uncoloured sound as opposed to the currently fashionable amp modelling.

I felt the EQ3B EQ was exactly right — three bands are about as much as most users can manage, and the quality of EQ was sweet and musical rather than hard and phasey, as can be the case with cheaper equaliser designs. Again, not esoteric, but very good nonetheless and significantly better than many digital EQ plug-ins.

As to the compressor, by offering presets it makes getting usable results much easier, but at the same time deprives the user of the experience of learning how to set up a compressor from scratch. I can't knock the results though, which are best characterised as natural sounding, with a hint of flattery and good preservation of the high end. Having a gain-control meter at least means you can make sensible decisions as to how much compression to apply, something that not all plug-ins or DAW compressors offer. Finally comes the HD4 headphone amplifier, which also does a good job. The monitor gain and mute facilities are useful, especially in a mixerless system with active monitoring.

This is a nicely presented product range offering good sound quality and functionality at a budget price, and with the option of a tidy desktop miniature rack for mounting.