Although few people realise it, Microtech Gefell was founded by none other than Georg Neumann himself in 1943, and it was the company in which Neumann built his first commercial microphone. A lot of water has passed under the bridge since then (see 'East Meets West' box), but suffice to say that the company produces Neumann-quality microphones at very attractive UK prices. 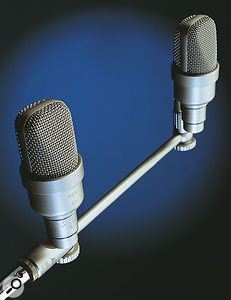 Photo: Mark EwingThe subject of this review is the M930, a compact, large-diaphragm, phantom-powered condenser cardioid microphone which uses the original Neumann-designed M7 single-sided capsule. This microphone body is constructed of steel finished in satin nickel or dark bronze, with a multi-layer wire-mesh grille. It weighs a solid 210g and measures about 120mm in length by 45mm in diameter at its widest part, with a broadly similar shape to the much larger and heavier Neumann TLM103. Indeed, the compact size of the M930 is very useful when trying to get a mic into a tight space. The company logo is laser-etched on the rear of the mic's body (going against the norm), with the model number and polar diagram on the front, and the serial number on the rim of the XLR connector. Our review model was part of a matched stereo pair, and the simple stand adaptors supplied with the microphones were etched with markings for setting the mutual angle to various standard positions.

Technical specifications for the M930 are very impressive, and remarkably similar to the Neumann TLM103. Self-noise is claimed to be an identical 7dBA (IEC 651), with the same sensitivity of 21mV/Pa. However, the Microtech Gefell's maximum SPL (at 0.5 percent distortion) is 142dB SPL — that's 4dB higher than the Neumann. Part of the reason for the higher headroom is a rather innovative method for generating the capsule-polarising voltage. Apparently, the M930 uses a high-intensity LED powered from the phantom supply to illuminate a photocell, which provides a decoupled high-voltage bias for the capsule.

The M930's frequency response is stated as 40Hz-18kHz, and the plots show a gentle bass roll-off from about 100Hz, reaching 2dB down at 40Hz. This is rather more gentle than the TLM103's roll-off, which is 2dB down at 50Hz. At the top end, a broad presence peak spans 6-15kHz, with a 4dB peak. This is of similar magnitude, but narrower bandwidth, than that of the TLM103. The polar response is a tidy cardioid which remains well controlled across the frequency range. It doesn't open out at low frequencies as much as the TLM103, and it remains far more consistent at middle and high frequencies too, although still broadly exhibiting the usual characteristics of a large-diaphragm capsule. 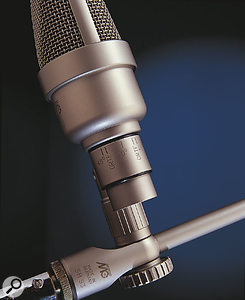 Markings on the ORTF stereo kit's mounting brackets allow precise microphone angles to be achieved easily.Photo: Mark EwingThe review model was actually part of an X-Y stereo kit, presented in a smart wooden box with a matched pair of mics and a bespoke vertical mounting bar. The latter screws onto a mic stand, and the two M930s fix to it quickly and easily such that they are positioned precisely one above the other in perfect horizontal coincidence. The markings etched into the stand adaptors enable the mutual angles to be set precisely.

There is also an ORTF stereo set which is identical, except that the vertical bar is replaced by a more conventional horizontal stereo bar for ORTF near-coincident mounting arrangements. I tried both setups and obtained good results, the X-Y arrangement proving particularly elegant to use and providing all the convenience and precision of a single-bodied stereo mic, but with the flexibility of separate microphones when required.

I compared the M930 directly against a TLM103, and my first impression was that these two mics sounded very similar indeed — which was a surprise given their relative sizes (and prices). The M930 seemed to have a slightly smoother and more extended bass end — although the proximity effect obviously has a large influence on this aspect of the sound — but overall it was quite hard to tell these mics apart. Moving around the microphones I found that the M930 had a slightly wider working area than the Neumann, principally because the upper mid-range pattern didn't narrow as much, and slightly better rear rejection, especially at low frequencies.

Both mics require a pop shield for close vocal work, as they are both prone to plosive popping, but the TLM103 seemed better isolated from mechanical noise through the basic stand adaptor. An optional shockmount is available for the M930, and I think this would be a useful accessory.

I tried the M930 on a variety of instruments, including spoken and singing voices, percussion, a variety of woodwind and brass — both solo and on sections — and solo cello. It acquitted itself very well indeed in all cases, and clearly had more headroom than the Neumann on the brass session. The presence peak is well judged and adds just enough definition to help instruments cut through in a mix without needing a fistful of EQ. However, as you would expect, the presence peak didn't always suit every voice equally well. That said, some careful positioning allowed me to get a very acceptable sound from pretty much everyone I used the mic on. Careful positioning is the key, as always, and while the proximity effect is quite pronounced when working close to sources it can be controlled predictably with small changes in distance. Although the polar pattern is impressively consistent with frequency for a large-diaphragm mic, it still shows the inevitable high-frequency narrowing which can be so helpful in taming the HF response through small changes of incident angle.

The M930 is a very versatile and capable microphone, equalling the performance of a Neumann TLM103 in every important way, yet it is smaller and lighter, has greater headroom, and is less expensive in the UK. It works well on just about any sound source, including all forms of human voice, capturing lots of detail, but in a fairly neutral way. I think a good shockmount would be a worthwhile expense, but the same applies to other similar microphones to the same extent — I always use an elastic shockmount with my TLM103s, for example.

The compact size and low weight of the M930 may be an important advantage to many, enabling easier and more discreet placement, as well as allowing the mic to be positioned at a boom stand's full stretch without having to over-tighten the clutch mechanism or worry about it toppling over. Of course, sometimes a large and imposing microphone is required to massage a performer's ego, but the M930 certainly produces a full-size sound, despite its diminutive stature.

The M930 is an ideal high-quality microphone for project studios, as well as making a very useful general-purpose addition to the mic cupboard in a professional recording or broadcast studio. This microphone is priced very attractively, yet matches or exceeds the performance of alternatives costing substantially more.

Georg Neumann established his first factory in Berlin in 1927 to repair electrical appliances. However, it was damaged by an incendiary bomb in 1943 and so he set up a new repair factory in a disused textile mill in a small town called Gefell close to the old border between East and West Germany, near Dresden. The first microphone made in this factory was the CMV4a 'bottle', which used Neumann's M7 condenser capsule (later used in the U47 and M49 microphones, as well as in several of Microtech Gefell's current models).

After the war, Neumann eventually returned to Berlin and started the Neumann microphone company we all know and love today. His former technical director, Mr Kuehnast, and most of the original staff remained in Gefell also making microphones, and the two facilities remained in close contact. However, when the Berlin Wall went up in 1961, all communications between East and West stopped, and as a result of communist ethos, the names of the former company owners were obliterated in 1972, and the name became VEB Mikrofontechnik Gefell. The company continued developing various advanced technologies through the '70s and '80s, including solid-state microphone amplifiers and government-funded development of high-powered industrial lasers. In fact, the company still uses a laser engraving machine to mark the model and serial numbers on the cases of its microphones.

When the East German government finally collapsed in 1989 and the Berlin Wall came down, the Berlin Neumann company offered to co-operate with Microtech Gefell once again. As part of the co-operation deal, the Neumann factory in Berlin tested the various Gefell microphones and the Neumann engineers were surprised to discover microphone technology more advanced than some of that available in the West! For example, Microtech Gefell were using hybrid FET amplifiers in the 1970s, a decade before the same technology was adopted in the West. The M900 and M910 microphones use a capsule made of a ceramic material moulded under high pressure and plated with chromium — technology developed in Moscow, perfected by Microtech Gefell, and unlike anything currently found in Western microphone designs.

Eventually Georg Neumann's heirs reclaimed a share of the old company as former owners, and when Sennheiser acquired the Berlin Neumann company in 1991, all links between the two companies were severed once again. Microtech Gefell is now privately owned by the Neumann family heirs and has continued to develop high-quality microphones for studio, broadcast, PA and measurement applications. Currently under the technical supervision of Kuehnast's son, Microtech Gefell still produces the M7 capsule in exactly the same way Georg Neumann taught the elder Kuehnast in the 1940s — hand drilling each hole in the backplate, making the PVC membrane, and gluing it all together by hand just as Neumann specified!

A surprisingly compact large-diaphragm condenser mic with specifications that equal or exceed those of more familiar mics costing significantly more. Hidden behind the Iron Curtain for most of the company's existence, Microtech Gefell's Neumann heritage has played a significant part in the quality of its products, supported by innovative and independent thinking in microphone technology.