The fifth version of Absynth introduces even more sound-mangling features and aims to be far more user‑friendly than its predecessors. 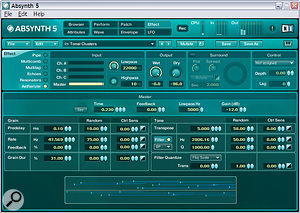 The grain cloud options of the Aetherizer effect are stunning, and can be applied to your own audio as well to Absynth patches.

There are few soft synths that rise to the dizzy heights of a fifth incarnation, but then Absynth has always been rather different from the norm. Following its humble origins as a Mac‑only release by software developers Rhizomatic in 2000, Absynth quickly joined the ranks of Native Instruments products and gained a PC version, while its semi‑modular design, wave‑shaping, granular synthesis and 68‑point envelopes also gained it a huge number of enthusiastic users.

Part of the reason for its popularity is that it not only runs as a stand‑alone version or as a plug‑in instrument, but also as a plug‑in effect that can treat incoming audio. This makes it a favourite among sound designers, but its quirky design also means that while many users love its sound capabilities, they rapidly become rather lost when it comes to creating their own sounds. Fortunately, in Absynth 5 a lot of effort has gone into making things easier to use, so let's see how successful NI have been!

If you want to make new Absynth sounds but never knew where to start before, the new Mutator will make you smile. First, you choose an existing preset as a starting point, and then select some of the tags from the Browser database first seen in Absynth 4. These comprise Instrument, Source, Timbre, Articulation and Genre. As you add further tags, your search is narrowed down to a list of presets whose parameters will be used as targets for your mutations.

Once you're happy with the target list, you click on the Mutate button, and each time you do so, a new Mutation preset is generated that combines the attributes of the original and target presets. The Mutation Amount slider adjusts how far from the original sound you want to go, while the Random Amount slider defines how much variation there will be between mutations.

If you don't like the current Mutation, click on the Retry button for another. Each one you do accept appears in the pop‑up Mutation History window, where you can decide which you want to save as new presets and which you want to discard. You can further refine your new sounds by excluding various modules from future Mutations, and by tweaking one or more of the eight fine‑tuning knobs that control parameters such as brightness, resonance and mod amount.

I spent a long time generating lots of mutations, and with a little practice was able to produce very acceptable results ranging from gentle variations on the original all the way through to radically new creations. While the results will never match the finely hand‑crafted creations of professional sound designers, Sound Mutation is nevertheless far more intelligent than your average 'random patch creation' tool, and will be welcomed by many long‑term Absynth users. 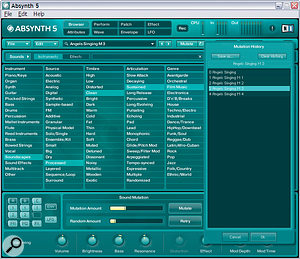 Absynth 5 features the rather intelligent and very useful Sound Mutation section with Fine Tuning and History features, which finally makes it easy for the newcomer to create unique sounds.

Granular synthesis (where audio is chopped into short 'grains' and recombined in various ways to produce new sounds) has always been a core feature of Absynth, but the new Aetherizer granular delay effect goes much further. Each grain is sent to a random position in the stereo field and can be pitch‑shifted before being fed back into the effect's input, while most parameters have a random control to generate more chaotic results. For instance, increasing the random aspect of pitch‑shifting gives results ranging from gentle chorus to swarms of insects.

The output of this 'grain cloud' can be band‑pass or comb filtered, and a very clever twist here is that you can also quantise the filter frequency so that its tuning jumps between notes in various musical chords or scales. Once you turn up the filter resonance and random filter frequency parameters, your grains emerge in chordal groups. Wonderful!

You really do have to hear the possibilities to appreciate how good the Aetherizer is, especially once its parameters are being modulated via custom envelopes and LFOs. From tuneful tonal clusters to total chaos, I soon generated plenty of sounds that I'd never heard before. The animated graphic representation of the grain cloud below the other controls is also a huge help in understanding what each one does. Given that it can also be used as an effect on incoming audio, I suspect NI could have released Aetherizer as a stand‑alone product for at least the cost of this upgrade.

Two new filter offerings to treat Oscillator Channels individually now grace the drop‑down list in the Patch window. First up is Cloud, a junior version of the Aetherizer with fewer parameters and no graphic window, but nevertheless capable of a lot of new sounds. Second is a new Supercomb to complement the existing Comb filter, this time with extra feedback options and tonal extras inspired by the dedicated Pipe and Resonators effects. This is a great resource for acoustic and metallic overtones.

In fact, extra feedback options are a recurring theme in Absynth 5, since seven other filters have now sprouted their own Feedback panels, so you can return signals from whence they came after subjecting them to Waveshaping, Frequency Shifting or Ring Modulation. There are lots of new creative options for adding custom filter distortion and even more organic‑sounding timbres.

Along with reorganised Filter, Modulator and Waveshaper modules, and added support for Windows XP and Vista 64‑bit operating systems, this covers most of the new features, apart from one: many modules now incorporate optional oversampling that improves audio quality, particularly at higher frequencies. Sounds good to me!

The only problem I experienced was a bug that prevented me storing my third-party Absynth sample content other than in the default location, resulting in 'sample not found' dialogues, but NI are already working on this.

Absynth has long been the first port of call for musicians searching for unique ambient, atmospheric and evolving sounds. If you've not yet succumbed to its many unusual charms, there's never been a better time to take the plunge. I know some commentators don't approve of the 'dumbing down' offered by Mutator, but I found it a most helpful tool and a great way to create unexpected new sounds. On the other hand, if you're already an Absynth user, upgrading to version 5 is a no‑brainer — it's worth it for the Aetherizer effect alone!

The Absynth 5 library now offers around 1800 sounds, including 250 fresh ones showcasing the new features. Here are a few of my favourites:

Absynth 5 still remains ahead of the pack when it comes to creating new sounds, although other, easier‑to‑use programs are beginning to snap at its heels.