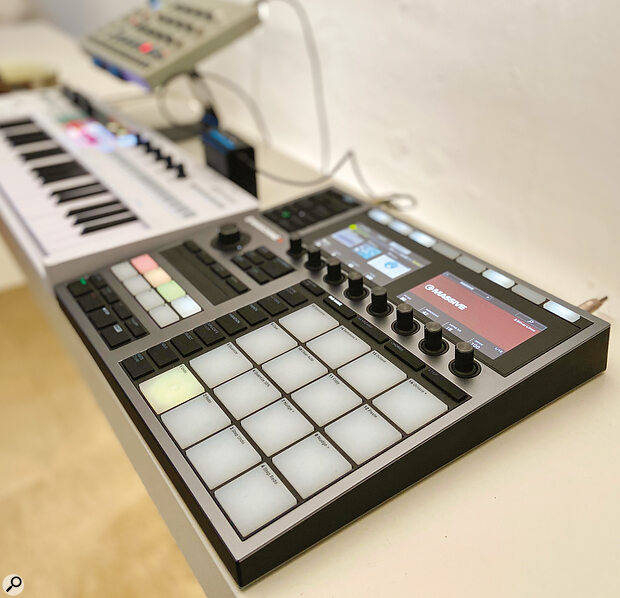 Is the Maschine+ the standalone music‑making box you’ve always dreamed of?

The arms race of beat production workstations has come full circle. In 2009 the first Maschine took cues from Akai Pro’s MPCs, but by moving all the hard work to an attached computer NI opened up the scope of what was possible. Maschine had access to processing power and plug‑ins, and could slot into the DAWs that had become the primary workspace for many producers.

Akai found themselves on the back foot, and the previous year’s Renaissance was to be the last of the classic standalone MPCs. The next MPCs followed Maschine down the hybrid route, with a range of hardware controllers acting as front‑ends to a Mac/PC‑based MPC app and plug‑in.

In 2017 Akai re‑took the initiative and capitalised on the trend for computer‑free composing and performing. The MPC Live and X saw the MPC software ported back to the hardware, using System‑on‑a‑Chip technology to combine some of the best aspects of a computer and a standalone groovebox. Maschine+ follows suit, and is Native Instruments’ first non‑native instrument. So what is gained and lost in the move to mobile, and who is this for? Let’s find out...

Maschine+ is a reworked version of the Maschine MkIII hardware that can detach from your computer and run standalone. It has an embedded processor running the Maschine software, with on‑board storage and an SD slot for user content. Standalone operation is the same as using a regular Maschine controller, without the computer‑based UI.

Rumours had suggested a standalone Maschine would be based around the MkIII, using its on‑board audio and MIDI interfaces. I’d guessed it would have Maschine’s internal suite of effects and its sound sources: namely sample‑based kits, sample‑mapped instruments, the drum synth engines, and the Bassline monosynth. I’d have been happy with that as an initial feature‑set, but there are some exciting surprises. NI have ported several engines from their VST plug‑ins, giving you access to NKS‑format sound and effect patches. And they’ve enabled expandable connectivity, with USB MIDI hosting and support for external MIDI and audio interfaces.

The extra brains crammed inside the Maschine+ only make it about 10 percent heavier than the MkIII controller, but it feels significantly more substantial because the front and rear panels have been replaced with gorgeous anodised aluminium. It has that smooth gunmetal finish that you find on high‑end hi‑fi gear.

The eight touch‑sensitive encoders have had an upgrade. They are now larger, all metal and have a damped action that doesn’t suffer from the variance I’ve noticed on my MkIII and Komplete Kontrol keyboard. They really add to the overall luxury feel. The displays are the same (there’s no touch upgrade), and you get the same wide, super‑sensitive pads.

Most of the rear panel is unchanged, housing all connections to the outside world including the line and headphone outs, and the mic/line ins, all of which have a tiny gain knob. However, the power button has moved to the front, and in its place is a pair of USB A ports for connecting devices when running standalone.

Firing Up The Maschine

My virgin Maschine+ booted to a welcome screen and asked for a Wi‑Fi connection. A nifty QR scanning process connected the unit to my Native Instruments account and I was then able to install the core plug‑ins and factory libraries, plus the five included Expansion packs. Updates were delivered over the air, and the additional Expansion Packs I bought on the NI website immediately appeared for direct download on the Maschine+. The core package comprising OS, plug‑ins and sound library all live on hidden internal storage, while Expansions install to the removable SD card.

As a Maschine MkIII user who tends to stay focused on the controller I had a head start. Using the Maschine+ proved practically identical to this apart from having an additional Settings page for managing preferences, connections and installations. If you’re used to doing some tasks like note editing on the computer you’ll need to learn the hardware equivalents. With practice these operations can become fast and precise, and quite a satisfying way of working. The UI is mostly smooth, and the pad response is super snappy. The audio settings screen reports a combined processing and output latency of under 6ms, and throughput monitory delay of 8.7ms. To match that on my Mac I’d need to be running around a 64‑sample buffer or smaller.

Maschine has a working structure that I really like. Tracks (‘Groups’) are selected from the eight backlit pads on the left, and each have 16 individual polyphonic sequencing lanes and audio...