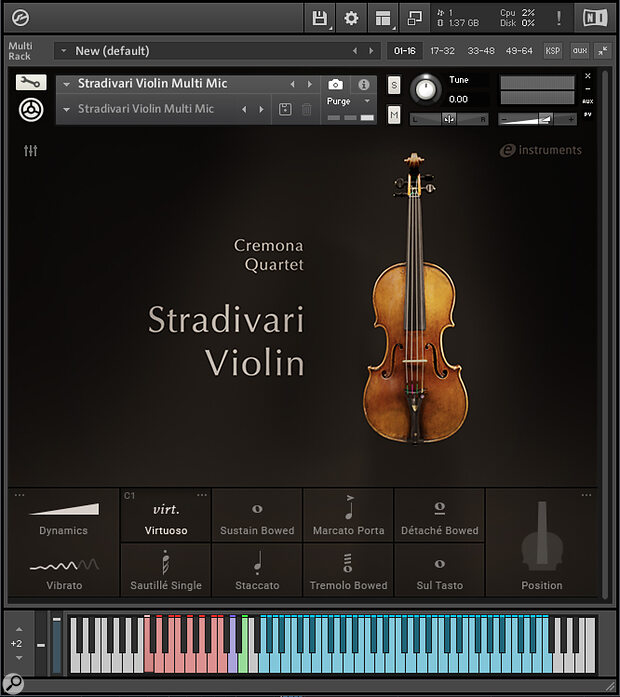 NI’s new instrument makes owning and playing a Stradivarius easier than ever before!

Playable, expressive solo violins are one of the holy grails of the sampling world. It’s a similar problem to producing a convincing solo sax or electric guitar: how the heck to cover the sheer range of articulation and tone colours a good player continually utilises, along with the subtle but crucial transitions between the notes. And then to make it all available in a DAW, most likely driven from a standard MIDI master keyboard.

Stradivari Violin is Native Instruments’ response to the challenge, developed in conjunction with Hamburg‑based e‑instruments. They’ve recorded a single violin, the silvery‑sounding 1727 ‘Vesuvius’ made towards the end of Stradivari’s life, which is currently in the collection of the Museo del Violino in Cremona, Italy. The capture took place in the auditorium there, apparently involving no fewer than 32 microphones, multiple virtuosi sharing the playing duties, and security guards manning the exits (I’m not kidding).

It’s worth noting too that Stradivari Violin is also a component of a larger library, Cremona Quartet, that adds a Guarneri violin, an Amati viola and a Stradivari cello, all enjoying most of the same sampling features. The entire quartet library is twice the cost of the solo violin reviewed here, and there’s an upgrade path for violin owners who’d like to explore some four‑way action later on down the line.

First, a quick rundown of the basics. Stradivari Violin runs in NI’s Kontakt or the free Kontakt Player, on version 6.2.2 or higher. It’s a 23.5GB download (equating to about 39GB of uncompressed sample content) that gives you two NKI patches: a 17GB multi‑mic version (occupying towards 4GB of RAM, with typical disk streaming settings), and a resource‑saving fixed‑mix alternative using 6GB of samples and just over 1GB of RAM.

NKS controller integration extends to the usual coloured keyrange prompts and various control mappings, but the library works well with standard five‑octave MIDI controllers too. Either way, all the important parameters have MIDI CCs ready‑mapped, with straightforward facilities to both learn new CC mappings and also to reconfigure the keys used for selecting different articulations. I found all aspects of presentation, technically speaking, to be completely intuitive and helpful: unlike a real violin there’s a very shallow learning curve.

Putting Stradivari Violin to use immediately reveals that NI’s approach has not been to reinvent the wheel, but — like so many premium‑quality libraries these days — just to make a very fully-featured wheel. 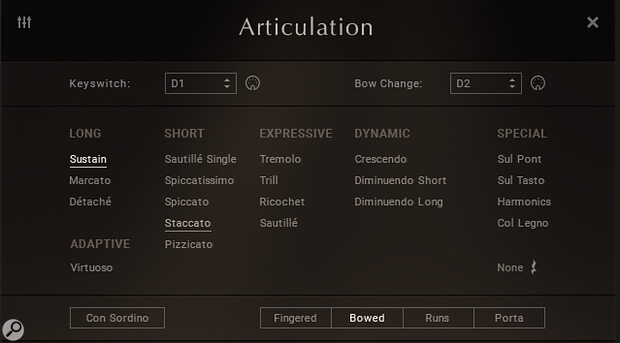 If the automatic, adaptive Virtuoso mode doesn’t give you what you need then 20 separate articulations are on hand to fulfil almost all musical requirements.

There are no less than 20 articulations on offer, all covering a G2 to F6 pitch range, beginning with a broad range of long and short bow strokes that will probably see the most use, for many projects. These are supplemented with a fine pizzicato, tremolos and trills (with variable speed), combination/repetition strokes (again variable in speed, and tempo‑sync’able), along with some nice and occasionally ghostly Special effects including Col Legno, where the wood of the bow makes contact with the string, rather than the hair. The interface lets you load any combination of eight of these articulations at a time, and a Con Sordino (bridge mute) option can be enabled per‑articulation rather than globally. The mute effect is applied using a DSP filter rather than by accessing alternative sample sets, and although subtle (compared to some violinists’ mutes I’ve heard over the years, when they’ve remembered to bring them on stage...) it’s plausible enough.

It’s possible that some users may never get round to exploring all the articulations, though, because by default both NKIs load up using an adaptive articulation scheme called Virtuoso. This selects either a sustain or marcato bow stroke depending on key velocity, while a push or pull of your pitch‑bend wheel immediately accesses the short, agile spiccatissimo and staccato. That’s not all: legato pitch transitions change with velocity, with a more impassioned portamento swooping in (by default) when you play harder. And the volume of the whole lot of it is subject to the position of your mod wheel.

An awful lot can be achieved with Virtuoso which, if you don’t require any really unusual techniques, and for a lot of ‘normal’ musical material, can sound realistic and expressively to the point where I think the vast majority of listeners would think they were hearing a real violinist. This is quite an achievement, already. The basic tone of the ‘Vesuvius’ and character of the playing is extremely likeable: it’s light, bright, airy, somewhat genteel and has a nice acoustic ‘bloom’ to it, and plenty of naturalistic movement and tone development through the sustained articulations.

Digging further into the library reveals more interesting features. Aside from the eight articulation keyswitches there’s one for changing bow direction for a held, sustained note. It’s a nice option to have for several playing styles where simply restriking a note (especially if you do so repeatedly) can sound unnatural. Otherwise, bow direction alternates automatically for held notes when the virtual violinist runs out of bow in each direction, mostly after about four seconds. Actually, you can hear alternating strokes occurring when you restrike notes generally, with some limited use of round‑robin alternation over and above this. All good of course, and crucial for authentic mimicking of a real violin. However, there’s no way to override the scripting and force a particular bow direction, to allow for a characteristic repeated down‑bow technique, for example, or to simply start a phrase on one direction or another. 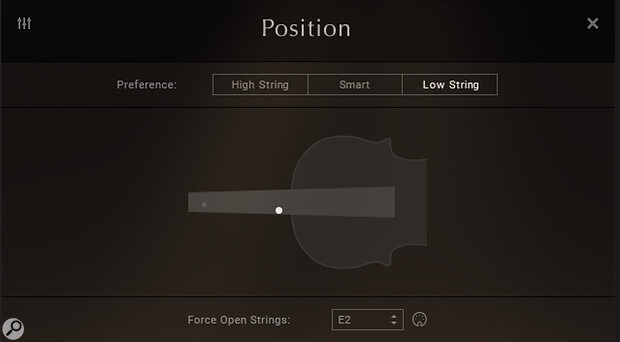 On a real violin it makes a big difference to any individual note’s sound quality whether it’s produced by stopping low down or high up on the neck, on different strings: the Position controls let you influence that in Stradivari Violin as required.

Double-stopping, the simultaneous sounding of two notes at once, can be triggered by playing two notes at precisely the same time. The upper note can then change, against a held lower, but not vice-versa. You can do things not normally possible on a violin too, such as sounding notes on non-adjacent strings simultaneously: quite a useful departure from reality.

Discussion of tone quality leads us nicely to the Performance pane, which handles aspects of dynamics and vibrato. As I mentioned before, the mod wheel is mapped to dynamics/volume in the Virtuoso articulation. In fact, most non‑sustaining articulations, when you select them manually, are controlled by key velocity instead. That default behaviour can be changed in the Performance pane, and you’ll also find a CC #11‑driven Expression slider that will control overall playback level independently of any localised shaping you’ve recorded with the mod wheel. 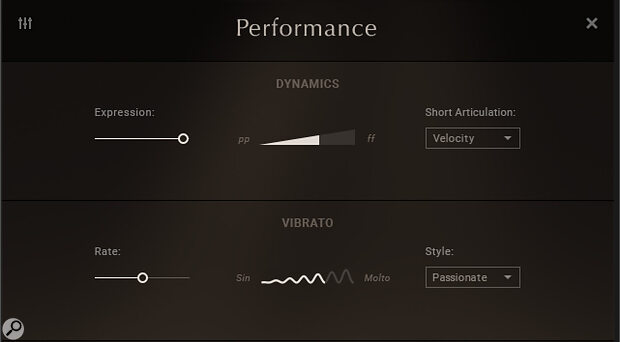 Dynamics and vibrato characteristics can be set up with the mouse in the Performance section, but for better momentary control they all also respond to MIDI CC control.

Vibrato, meanwhile, is subtly sophisticated. Instead of trying to juggle lots of different sample sets with varying amounts of vibrato, Stradivari Violin applies artificial but very natural‑sounding undulations to otherwise clean, non‑vibrato sample sets. I say ‘undulations’ advisedly too, because a periodic intensifying of tone seems to happen alongside the more obvious variation of pitch. The waveform is apparently derived from analysis of real players’ vibrato characteristics too, so a simple sine or triangle LFO this ain’t. Both rate and amplitude are continuously variable in real time, and there are six styles on offer.

Finally, we come to the various legato options, of which there are quite a few. For the ‘Long’ articulations Sustain and Marcato no less than four types of legato transition are available: Fingered, Bowed, Runs and Porta[mento]. Fingered changes pitch without changing bow; Bowed does change bow for each new note but still sounds different to detached playing; Runs makes for faster‑speaking and cleaner transitions between rapid pitch changes within a single bow; and Porta makes scooped, swoopy position changes audible between notes. It takes very little effort to explore the effects of all these different legatos, and to zone into what works best for your material. The only weakness I encountered was some short‑lived phasing and doubling (which instantly shouts ‘sampled!’) when rapidly alternating certain pairs of notes — not much rhyme or reason which, incidentally — and when using Portamento transitions for intervals of a sixth, seventh or octave. Not all are edge‑cases it must be said, but neither is any of it so serious as to mar the overall performance.

Short of employing a session player, it’s one of the best options out there, currently.

I’ll admit a certain trepidation in taking on this review: before I’d tried Stradivari Violin my heart sank at the thought of grappling with yet another new, fiendish, fiddly articulation control scheme. It turns out I shouldn’t have worried, because while there certainly are bells and whistles aplenty they’re extremely easy to master and to employ to musical ends. What’s more, this is a library that can give remarkably good results from the very first time of asking, that responds intuitively to playing at least as much as to ‘programming’, and yet will sound better still with some effort mastering its features.

My concerns are few. Maximum sampled dynamic level seems to be a fairly sedate forte, not more, and a really impassioned, unbridled, hair-breaking sound is not part of its repertoire. And the built-in MIDI learn facilities are strictly for MIDI CCs only, so you can’t easily assign vibrato amplitude (for example) to respond to aftertouch, which seems such an obvious tie-up.

In the final judgement, and assessing the extent to which the library sounds ‘real’ and convincing, a little perspective is needed. Attempts to pull off the solo part of the Brahms concerto will probably get sniffed out by many listeners. However, the results can still be incredibly good, and for a broad range of other material, not least orchestral solo spots with a touch of the Schindler’s List spun-out melody, or more active writing akin to a Danse Macabre, Stradivari Violin will do it, and can sound excellent. Short of employing a session player, it’s one of the best options out there, currently.

The Sound Of Silence

The multi‑mic version of Stradivari Violin contains an intriguing Room Noise slider in its mixer view, which adds in the background ambience of the Auditorium Giovanni Arvedi where the sampling sessions took place. Native Instruments suggest this adds an extra sense of realism which can glue together a solo performance that includes periods of silence. In principle I would not disagree, but even at full whack the added low‑end rumble, 200Hz hum bump and 14k Hz shelf never come above about ‑85dB, so I doubt there are many listening scenarios in which the effect could ever, practically, be heard. Still, in the rarefied world of old Italian violins little things can mean a lot, and it’s there if you need it.

Spitfire Solo Violin is amongst the fiercest competition currently, with a really ballsy and classy character, more extensive round‑robin sampling, and lower asking price. However, it doesn’t allow the user to select individual articulations: it makes all the decisions contextually, and there’s no pizzicato nor most of the Expressive, Dynamic or Special techniques. Embertone’s Joshua Bell Violin is capable of equally remarkable results, and for an entirely different approach try Audio Modeling’s 15MB (yes, megabyte!) SWAM Violin.

An often surprisingly convincing, extensively sampled solo violin, of world‑class provenance, that gives fine results in no time at all.