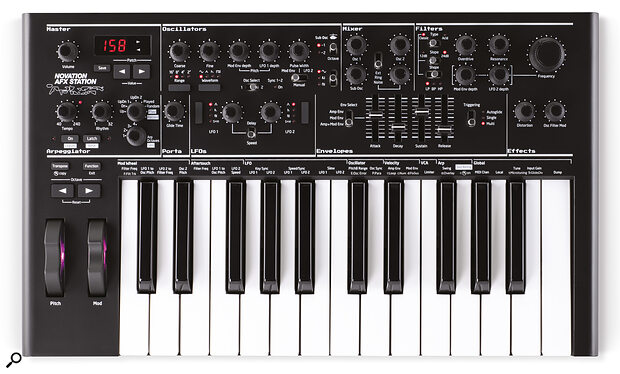 Novation have injected the Bass Station II with a healthy dose of Aphex acid.

Anything sporting the name of IDM superstar Richard D James, aka Aphex Twin, aka AFX, is likely to get a lot of attention in synth circles. Novation got quite the scoop back in 2019 when they updated the original Bass Station II synth with ‘AFX Mode’ as a free software update for all users. They also added a slew of other new features since the Bass Station II’s original release back in 2013.

If you’re unfamiliar with the Bass Station II, I will refer you back to Paul’s original SOS September 2013 review for the gritty details. In a nutshell, it’s a two‑oscillator analogue monosynth. The audio signal path is all analogue, but the modulators are digital. There are two filters, two LFOs, two envelopes, an arpeggiator, a sequencer and 127 preset slots. Round the back you find: MIDI In/Out on 5‑pin DIN, a sustain pedal input, an external audio input, a mono line output and a headphone output. Lastly, there’s a USB type‑B socket for USB MIDI and software editor support.

All of this remains exactly the same on the AFX Station, as does the layout of the knobs and switches. The main differences between the Bass Station II and the AFX Station are purely cosmetic, although it does come with a new preset bank from some fairly high‑profile sound designers, although sadly none from Mr James himself.

The original blue and black colour scheme is replaced by purple and black, some font changes and new knob‑caps. Before you run off to the classifieds to find a pre‑loved Bass Station II, however, bear in mind one important thing: added to the AFX Station front panel are labels for 10 shortcuts, all new features added since the Bass Station II’s first release. For example, entering the synth into ‘AFX Mode’ requires pressing the Function key and the second F# key twice. These features are clearly marked on the AFX Station, but Bass Station II owners will have to memorise them.

Since its release, the Bass Station II, and by extension the AFX Station, have received a number of excellent new features. ‘Oscillator error’ introduces variable randomness into the oscillator pitch, to simulate the instabilities of old analogue VCOs. Paraphonic mode allows for playing two pitches simultaneously by tracking oscillators 1 and 2 independently. Envelope looping has also been added, with either or both envelopes capable of looping between 1 and 16 times. ‘Fixsus’ turns the envelopes into ASR envelopes and the Decay controls how long the sustain is. These envelopes always complete their full run when triggered, so are great for making drum sounds (ideal for AFX mode).

The original Bass Station II had fixed filter tracking but that was improved too, with eight selectable steps between 0‑100 percent. Glide Divergence is another unique feature which alters the amount of glide time offset for each oscillator. This sounds great when used with ring mod or hard‑sync patches. Microtuning has also been added, with eight preset tuning tables and the ability to create your own. And, as if there weren’t enough for the aspiring mad sound professor, you can even morph between tuning tables whilst playing. Lastly we have independent sub‑oscillator tuning, which means the sub‑oscillator can be tuned just like a regular oscillator, opening up those lovely triad chord‑stabs normally reserved for three‑oscillator synths.

So What Is AFX Mode?

In short, AFX Mode allows you to make changes to a sound for every key on the keyboard. This works by enabling an ‘overlay’ on any patch. Overlays are a modulation source which remembers knob and switch positions for 25 different keys (the length of the AFX Station’s keyboard). Outside of these 25 keys, the patch on top of which the overlay sits will play as normal.

Because every key in the overlay can hold a different value for every knob or switch, you can go from subtle per‑key variations of a patch, to an entirely different sound on every key. There are just eight preset slots for overlays, and each of the 127 patches can reference one overlay. This means that if you change an overlay that is used in more than one patch, it will change for all patches.

What I love about this feature is that it forces you to think about modulation in a new way. Remember that this is still a monophonic synth, the overlays are simply changing lots of parameters every time you press a key. It’s an ingenious idea. I found there were two main approaches to using them. You can treat each key as a separate sound and create lots of individual noises — this creates great drum kits. Otherwise, more subtle overlays can be used to create variations on a melodic sound by tweaking the sound for individual keys. I found that programming a bass or lead line, and then using an overlay to inject some variation into one or two notes was very pleasing.

There are enough experimental features to keep even the most diehard synthesist happy.

The AFX Station is not a new product, but rather a refresh of an old one. To be clear, if you own a Bass Station II, you can enjoy all these features now for free by simply downloading the update from the Novation website. If you’ve been considering the purchase of a Bass Station II, the AFX Station has one very clear advantage: the shortcuts to all the new features added since the original release are printed on the front panel right above the relevant key. If, like me, your memory is not what it used to be (too many late nights listening to Aphex Twin albums in the 1990s, I suspect), this is a bonus well worth having.

Taken as a whole, the AFX Station offers incredible value for money. Not only does it give you a great‑sounding two‑oscillator monosynth, but there are enough experimental features to keep even the most diehard synthesist happy. Enabling AFX mode over a paraphonic microtonal patch that morphs from one tuning table to another can make you feel like a synth god (although making it sound good is the real celestial challenge). Novation have done an amazing job keeping the Bass Station II feeling fresh with feature‑packed updates, and the AFX Station is in some ways the natural end point. It is a limited edition though, so grab one while you can.

Components is Novation’s web‑based editor interface for all their hardware products. Along with the release of the AFX Station comes an update to Components which allows you to edit AFX mode directly from your computer. Components also easily manages software updates plus backing up of patches, overlays and tuning tables.

The AFX Station is a fresh coat of paint on the Bass Station II, a synth which has, thanks to continual development and free updates, and much like Aphex Twin’s music, managed to stay relevant, enticing and just a little bit mad.