Nektarine, which is part of the T4/T6 package, is a Nektar-developed VST/VST3/AU plug-in that can host any other VST2.4, VST3 or AU plug-in instrument, thereby allowing you to control it directly from the Panorama T4 and T6. Not only can you run as many tracks with an instance of Nektarine as your CPU can handle, but also you can host up to 16 plug-in instruments in each instance, loading each plug-in in its own individual layer with control of volume, pan, mute and solo. 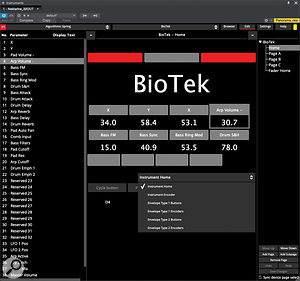 The parameter pages available in Nektarine for Tracktion's BioTek organic synthesizer, showing the Arpeggiator parameters available for editing. The drop–down menu shows the available encoder and button assignment screens.Nektarine arrives with pre-configured control mapping for most popular plug-in instruments. An edit menu allows you to both customise the Nektar maps and to create new maps for plug-in instruments where none are supplied. Nektarine also features pre-configured patch libraries for many popular plug-in instruments and its in-built browser allows you to manage these — including grouping, tagging, rating and search functions — and to import user patches directly from a plug-in into the library.

Although Nektarine does require a fair amount of initial setup work, which mainly involves downloading, importing and configuring the patch and map libraries to suit your way of working, if you commit to incorporating it into your workflow then it delivers two benefits. Firstly, providing that all your DAWs can load VST or AU plug-ins, Nektarine gives you the same user interface across all your plug-in instruments, which can (and does) make life a lot easier. Secondly, you can load an AU plug-in instrument into a VST instance of Nektarine and vice versa.

In use, the combination of Nektarine and the Panorama T4 proved to be quite intuitive in operation. On launch, Nektarine communicates immediately with a connected T4, and loading an instrument plug-in that has been mapped in Nektarine assigns the T4's controls according to that map, and those assignments, and their status, can be viewed on the T4's screen. Under Nektarine, the LED-illuminated buttons under the T4's faders help you navigate around an instrument plug-in (each button being labelled with common control page names covering OSC, Filter, Env, LFO and FX), and select the corresponding Nektarine factory map page when pressed. 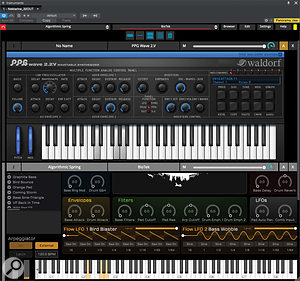 Nektarine with two instrument slots loaded — PPG Wave 2.2 is available for editing from T4 and/or the mouse and keyboard.If the particular plug-in instrument that you have loaded has not been pre-mapped by Nektar, you can create a map for it using the program's Control Edit page, assigning parameters to controls either through drag-and-drop, or by using the T4's Parameter Learn function. Control Edit also allows you to edit the factory maps, so you can customise those maps to your liking.

Despite its intuitive operation and ease-of-use, Nektarine is a program whose benefits are only going to come from committing to it and carrying out the setup and configuration necessary to integrate it with all your instrument plug-ins and into your workflow, not to mention the setup that would then become necessary to bring Nektarine into legacy projects and songs.

Naturally, that also means committing to the T4 (or T6) as your control surface in order to harness the full potential of its partnership with Nektarine, a route that also brings with it the benefits of Nektar's DAW integration.

As a controller, Nektar's Panorama T4 is actually pretty impressive. Its keyboard has a nicely firm, but supple, synth action that I found enjoyable to play and, like the eight touch pads, its keys are velocity-sensitive and equipped with aftertouch. Its MIDI setup is well thought–out and, not being the greatest keyboard player in the world, I particularly loved having the ability to assign notes, chords and separate MIDI channels to the pads as it made playing chord stabs and/or percussion against a keyboard bass or melody line a breeze. On top of that, the layer of expression added by the pad and note repeat functions opened up some interesting horizons that I'm not sure I'd have been able to explore without those features.

The T4's MIDI control capabilities under Nektar DAW integration and Nektarine make a great deal of practical sense, especially if you're a keyboard player who is looking for a centrepiece for a DAW-based recording/composing setup. During this review I had the T4 set up at right angles to my DAW workplace and, once I'd got my head round its functions, operational quirks, shortcuts and place in my workflow, relying on its small screen for status information felt quite natural and meant that I didn't have to keep on turning to view my own monitor screens for confirmation.

Although I can't think of another hardware/software combination that is directly comparable to Nektar's T4/T6, if you're into this type of single-manufacturer integrated keyboard/software offering, then Native Instruments' Komplete Kontrol hardware and Kontakt software instruments will definitely come into consideration. Elsewhere, you'll find keyboards and controllers from other manufacturers that integrate well with a particular software package; Akai's APC40 MkII and Novation's Launchpad with Ableton Live being a couple of such examples.