Neve believe that there's scope to bring classic designs up to date — and that's exactly what they've done here, taking their revered 1081 mic preamplifier as the starting point. 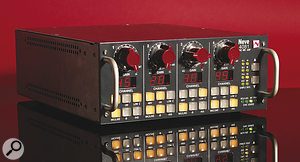 One of the first things everyone learns when they first become interested in professional audio is the reputation and history of the original Neve company and its products. The 1073 and 1081 mic preamps are legendary, and rightly so, with countless homages from a wide range of other manufacturers. This enduring reputation is not lost to the present incarnation of the company, AMS Neve, and in recent years they have introduced several new products based on those original designs, but with modern enhancements to make them better suited to current workflow practices and requirements.

The new 4081 Quad Mic Preamp builds on the strong success of the 1081 module, which is built in exactly the same way as the 1972 console's original and the 1081R remote-controlled preamp rack, which accommodates up to 12 compact preamp modules based either on the original Neve 1081 or the technically improved AIR Montserrat studio variant.

The 4081 is a very neat little preamp block, being 2U high and half-rack width, but it is quite a deep unit, measuring roughly 270mm behind the rack ears. Despite its chunky appearance, the 4081 is surprisingly lightweight — although that is in part due to the use of an external power supply unit. An optional kit is available to allow either a single 4081 or a pair to be rackmounted, if required, but the unit also has aluminium handles on the front panel that protect the controls and make it easily portable as a stand‑alone preamp.

Like the 1081R, every function of each of the four channels can be controlled either directly from the front panel, or remotely via Neve's Remote Control software running on a Mac or PC and connected via USB 2, with subsequent units daisy‑chained using the built‑in RS485 interface. Up to 16 4081 units can be remotely controlled in this way, providing a total of 64 channels. A four‑way DIP switch on the rear panel provides the means of uniquely identifying each 4081 module in a multi‑module installation.

The chassis can also accommodate an optional digital converter card, which digitises the four channel outputs and presents them in both Firewire and AES3 formats. It also accepts four digital return channels from the Firewire or AES3 ports, and these are converted in a D‑A stage and made available as analogue line‑level signals from a 25‑pin D‑sub socket on the main unit. These channels would typically be used as monitor returns or artist cue-mix feeds. The same D‑Sub socket also provides access to balanced insert returns for each channel, which allows an alternate input signal to be routed to the A‑D converters. Eight XLRs on the rear panel provide the four channel mic/line inputs and analogue line outputs, while the external universal SMPS power unit connects via an eight‑pin DIN socket.

The 4081 is essentially a re‑packed set of four 1081R preamps, and the front‑panel facilities are very similar to those on that device. A large, very lightly detented rotary encoder, fitted with the classic red Neve winged knob, sits at the top of the channel and is used to adjust the preamp gain. This control also has a press‑switch function which, although not functional in the current v2 software, is intended to interrogate the console settings when the 4081 is used with a Neve 88R console. (This feature is projected for activation in v3 software.) 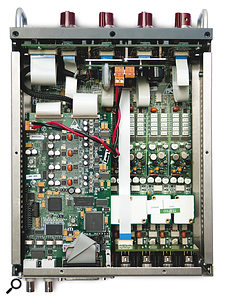 A peep inside reveals the neat layout and high standard of construction you'd expect of a Neve unit.In microphone mode, the gain range spans 20‑70 dB in 5dB increments, while in line mode the range is reduced to 0‑20dB, in the same 5dB steps. The current gain setting is displayed in the large two‑digit LED window below the knob, and a pair of LEDs indicate signal present (green for signals above ‑30dBu) and overload (red at +24dBu, which is 2dB below analogue clipping). Compared with traditional Neve preamp gain switches, the rotary encoder on the 4081 feels horribly flimsy — which is something I found quite off‑putting!

Below the numerical display window, six illuminated push-buttons provide all the usual preamp switching functions: phantom power, a 20dB pad, low‑impedance mode (intended for ribbon mics), mic/line input switching, polarity inversion, and activation of the insert point, which switches the input to the (optional) A‑D converter from the preamp's output to an external input. This facility allows an external compressor, for example, to be patched between a channel's analogue line output and the corresponding balanced insert return to the A‑D converter, and switched in and out via the 4081's front‑panel button.

To the right of the four preamp control sections, at the top of the panel, is the familiar power on‑off button that is identifiable by its illuminated Neve logo. Below that are two buttons that configure the optional digital card's sample rate and clock source. An array of eight yellow LEDs indicates the current sample rate, with all the standard modes from 44.1 to 192 kHz, plus indicators for 384kHz and the DXD sample rate. Four green LEDs below these indicate the current clock source from word clock, AES3, Internal, and Firewire. It's all pretty logical and intuitive to use, and everything works exactly as you'd expect.

The 4081 may be based on a classic all‑analogue design, but the digital connectivity on the rear panel shows that it's ready for integration in a modern studio!

Compared with the 1081 Classic, which I reviewed in SOS March 2004, I have to say that the 4081 unit feels rather less substantial — an impression created mostly by the flimsy gain controls and the light weight. However, this initial impression, although disappointing to anyone brought up on the solidity of classic Neve module designs, is rather misleading, and after using the 4081 for a short while, the overall build and sonic quality of the unit is quickly revealed.

Of course, this is just a preamp. The equaliser section that forms such an integral part of the standard 1081 module is absent here, so the ability to manipulate the tone of the signal is also absent. However, that brings benefits in terms of cost, and many potential users these days prefer to record 'flat' anyway, and process subsequently using either software plug‑ins or other outboard.

The remote‑control software is easy to install and configure, and works extremely well, with a clear graphical user interface replicating the 4081's front‑panel controls. The gain is altered using a drop‑down box, but the buttons work by clicking on them with the mouse. Settings can be saved and recalled, and Pro Tools users can control the 4081 directly via MIDI, if required.

Neve preamps have never really been about transparency. The use of transformers on both the input and output inherently imposes a sound character. Nevertheless, the 4081 is still a very clean‑sounding preamp that is nothing if not highly musical and involving, bringing a larger‑than‑life quality to the party. The bass has a tendency towards being full bodied, but still very natural, while the high end is open and extended. Transients are undoubtedly softened slightly. compared with modern, fast, transformerless preamp designs, but in the digital age this is probably no bad thing, and the very subtle crushing effect imposed by the transformers screams 'analogue' in the nicest possible way!

With 70dB of gain available, this preamp is never caught short, even with low-output ribbon mics and distant mic placements, and while the published EIN figure of ‑123dBu at 60dB of gain is hardly state of the art, the system noise character is benign and unobtrusive. Similarly, the distortion figure (less than 0.07 percent at +20dBu output) is good, but nothing to write home about compared with more modern designs. However, it's the nature of that distortion that's important — and I think everyone would agree that it is both a subtle and a very 'good' sounding distortion! Quieter and cleaner preamps are available (my own preference being for the GML 8304, for example), but sometimes the little extra bit of colour that the 1081 provides is exactly what is needed to help bring a source to life.

As a compact, four‑channel mic preamp, the 4081 has a lot going for it, and coupling two units together to fill a 2U rack space with eight channels is a very attractive option, if the budget allows. Actually, the 4081 provides extremely good value for money, at approximately 50 percent of the cost of the equivalent price‑per‑module of a 1081R rack system — and that system doesn't include any digital interface options either! The ability to install a digital card and to connect to a computer using Firewire will undoubtedly be the icing on the cake for a great many potential 4081 purchasers, and the remote‑control functions add a very shiny cherry on top! This is a very nicely engineered preamp with a superb feature set, offering an extremely attractive variation on the much-loved 1081 theme. Well worth checking out.

As mentioned in the main text of this article, Neve manufacture a number of products based on the original 1081 preamp, notably the modular version, the 1081R.