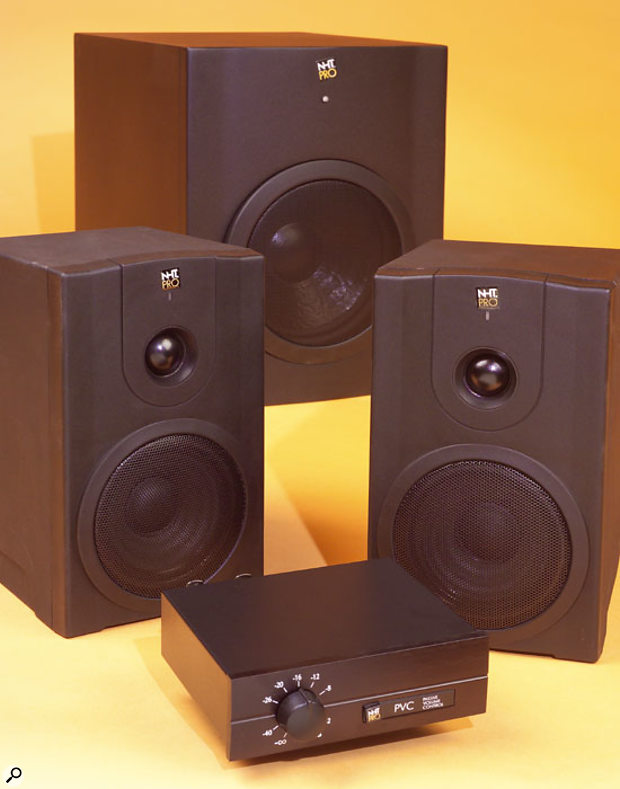 This new infinite-baffle 2.1 monitoring system incorporates some unusual technology, including cabinets cast from aluminium-zinc alloy. But do these innovations translate into a cutting-edge sound?

The Californian company NHT have been in business for about nine years. Originally established by audio enthusiasts Chris Byrne and Ken Kantor to make hi-fi and home-theatre speaker systems, the company were sold in 1990 to International Jensen, which then sold them to Recoton in 1996. Byrne and Kantor started a new company called Vergence Technology in 1998 to make pro-audio monitors, and three years later the two owners also sold that new business to Recoton! The original consumer and new pro-audio products where then combined under the NHT brand. But the corporate 'pass the parcel' game continued as the newly re-combined company was then sold to the Rockford Corporation in 2002. The reason for mentioning all this is to explain why the subjects of this review are variously referred to in their handbooks and on the products themselves as being made by NHT, Vergence, and Recoton!

The units in question make up a compact satellite plus subwoofer system comprising a pair of M00 powered mini-monitors and an S00 powered subwoofer, along with an additional Passive Volume Control unit. Apparently, the M00 is derived from another NHT product, the well-reviewed Super Zero hi-fi speaker — a compact passive model with a conventional wooden cabinet.

The M00 is certainly compact, with a cabinet measuring just 9 x 5.7 x 7.3 inches (hwd), but is relatively heavy at 14lbs. The cabinet is a sealed-box (infinite-baffle) design and, rather unusually, it is cast from an aluminium-zinc alloy, with a mica-loaded polypropylene (ABS) front baffle. The sealed-cabinet design is a good way of achieving an accurate transient response, and the fact that it is constructed from cast metal means that it serves as a good heat sink for the drivers and amplifier. It is also extremely rigid and free from audible resonances. Like most small monitors of this type, there are threaded mounting holes built into the rear panel to enable the speaker to be fixed to a wall or ceiling using a standard Omnimount bracket.

The drivers comprise a 4.5-inch doped-paper woofer and a one-inch fluid-cooled tweeter with a soft fabric dome. Both are fully magnetically shielded, as is the mains transformer. A proprietary NHT design, the woofer features a dual-layer voice coil wound on an aluminium former to enable sustained high-temperature operation. The two drivers are coupled with a passive crossover meeting at 2.2kHz, and a fourth-order (24dB/octave) high-pass filter cuts in below 80Hz to protect the woofer. 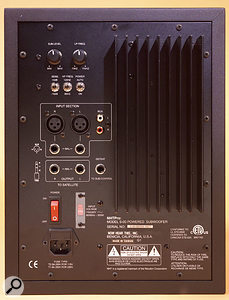 While most powered speakers of this kind employ 'chip amplifiers', the M00 uses a completely discrete, high-voltage 75W amplifier to drive the system. This is claimed to produce 150W peaks when needed, with a high current capability, driving the system to a substantial peak acoustical power of around 111dBSPL at 1m. The specifications list a frequency response extending between 93Hz and 20kHz (±2dB) when measured at two metres. Clearly, this is not what you would call 'full range', but the tight specification limits hint at the linearity of what is provided here. Distortion is also listed as being better than one percent at 90dBSPL — again, a creditable figure for such a compact monitor.

The rear panel is clearly laid out with a trio of connectors, three toggle switches, and a fused IEC mains inlet and power switch. Balanced inputs can be accommodated on XLR or TRS sockets, which are wired in parallel to enable daisy-chaining when the M00 is used for 'installation' applications. An unbalanced input can be connected to a phono socket. The three toggle switches cater for nearfield or midfield operation, +4dBu or -10dBV sensitivity, and automatic power switching.

The nearfield/midfield switch is interesting. In the nearfield (in other words, with the speaker within 1m of the listening position) it provides a gentle HF roll-off above 3kHz, reaching -3dB by 20kHz. The midfield setting (speakers between two and three metres from the listening position) provides a nominally flat response. The automatic power-switching mode engages a circuit which monitors the input signal, switching the speaker into a low-power standby mode if there is no input signal for 10 minutes. An LED on the front panel lights red when in standby mode, and when an input is detected the speaker is powered up automatically and the LED turns green.

Supplied with the NHT monitors was the Passive Volume Control (PVC), a small metal box which is 1U in height but about a third of the standard rack width. The front panel carries nothing but a single rotary volume control, while the rear panel has two male output XLRs and a pair of Neutrik combi jack/XLR inputs. Also provided were a pair of adaptors converting between phono sockets and quarter-inch tip-sleeve jack plugs, intended to allow unbalanced hi-fi signals to be connected to the PVC.

Taking a peek inside the box, it is exactly what it says: a passive volume control using a multi-ganged potentiometer to control signal level. The connectors and pot all sit on a large PCB with no other components other than a few wire links. It is not entirely clear whether the gain control is a true balanced design, but it seemed to work well enough in practice.

Designed to complement the M00 powered monitors, the S00 subwoofer is a powered device with built-in crossover-filtering facilities. The infinite-baffle cabinet is made from 0.7-inch-thick MDF and measures 13.25 x 10.25 x 13 inches (hwd). It weighs 30lbs and houses a single long-throw eight-inch doped-paper driver. Like the M00 monitors, the amplifier is a discrete, high-voltage design capable of delivering 125W continuous power with 250W peaks. 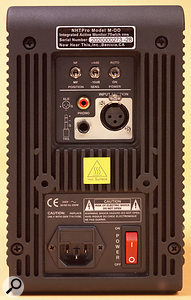 S00 subwoofer rear panel connections.Photo: Mark EwingThe rear panel is equipped with a fused IEC mains inlet and power switch, a mains-voltage changeover switch, and a comprehensive collection of I/O connectors and configuration controls. The unit accepts two input channels, with balanced inputs on XLR or TRS plugs and unbalanced inputs on phono connectors. High-pass-filtered outputs are provided on a balanced TRS socket for each channel. A tip-sleeve quarter-inch socket accepts a footswitch to bypass the subwoofer if required. The signal inputs are simply plugged into the S00, and then the filtered outputs routed on to the M00 satellites.

The two rotary controls determine the subwoofer's output. The first controls the output level over a range from maximum to -20dB, while the second determines the subwoofer's low-pass filter turnover (70-110Hz) with a default 95Hz setting at a centre-detent position. The overall response is claimed to extend between 40Hz and 115Hz (±2dB), with a peak acoustical output of 108dBSPL at 60Hz.

NHT Pro In The Studio

The M00 is obviously designed for use in applications where good-quality, magnetically shielded compact monitoring is required — for example, video and audio DAW editing suites, small home studios, and installations in pubs and restaurants. The infinite-baffle enclosure lends a very smooth, natural quality to the bottom end, and the treble is detailed but well controlled. The lack of complex room correction equalisation is no real loss — the nearfield/midfield switch works well to correct excessive brightness when used very close — and the rest of the frequency range is very well balanced indeed. The M00 delivers a clear, detailed sound with good levels of resolution for the size and price. It also produces believable dynamics with an extraordinary peak level capability — especially if used in the nearfield. Small monitors like the M00 tend to provide good stereo imaging, but I felt the impression of depth was rather restricted, giving a rather two-dimensional sound.

The S00 subwoofer has clearly been optimised to work perfectly with the M00, and the interaction between them is virtually seamless. Setting up is very straightforward, with only the level control to adjust to fine-tune the overall frequency response of the system. Like all sat + sub systems, the location of the subwoofer in the room is critical to the end result. The easiest approach is to place the subwoofer in the listening position, and then crawl around the walls listening for the place where the smoothest, most consistent bass signals can be heard — the subwoofer can then be located in that position and the level adjusted to match the satellites. With a subwoofer measuring less than a cubic foot in volume, dragging the S00 around the room is not an onerous a task at all.

The volume controller works well enough as a front end to the system, and would be very useful in situations where the M00/S00 is fed directly to a computer soundcard, for example. However, it does seem rather expensive for what it is. Proper monitoring units like the Samson C*Control cost little more and offer a lot more facilities, including input switching and talkback. Overall, I found the complete M00/S00 system to be a very competent performer, delivering a full-bandwidth soundscape with excellent dynamics, resolution, and balance — far better than the size and UK price would initially suggest.