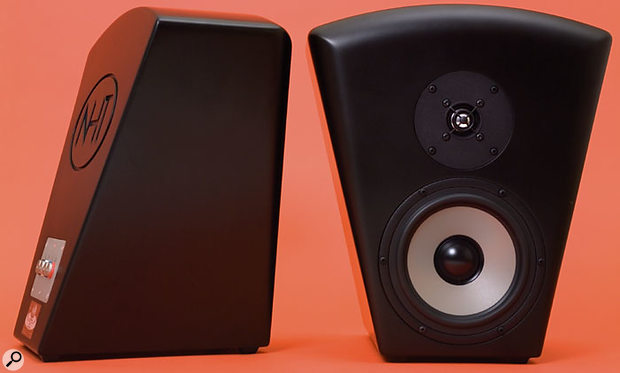 The Californian company NHT's latest offering is a two-way active nearfield monitoring system comprising a pair of passive speakers which are connected via a four-way, 4mm banana-socket connection panel to a separate unit containing four 150W Class-D amplifiers. The crossover functions are performed by an integral DSP system, which has the potential to be upgraded and modified via the built-in USB 2 interface.

NHT have used an OEM digital crossover design from DEQX in Australia. This technology is designed to integrate loudspeaker drive units in order to optimise their acoustic performance and minimise their mechanical deficiencies. As well as simple frequency-response correction, this system is also claimed to optimise the system's time-domain response — and all with a latency of under 10ms. Distortion is specified as below 0.5 percent across the entire 55Hz-to-20kHz bandwidth at 90dBSPL, and less than 0.3 percent above 100Hz. The on-axis frequency response is apparently flat within ±0.5dB over the full range.

The pictures of the speaker cabinets might look like someone has been playing with the skew transformation facilities in Photoshop, but they haven't — the speakers really do look like that! No two surfaces are parallel and everything is just madly wonky, with an egg-shape top tailing off into a narrow foot, and the rear panel sloping out towards the bottom. NHT's literature explains that the widened baffle around the tweeter is intended to promote an even power response, and keeping the box narrow at the base reduces mid-range reflections. The edges of the baffle are well radiused to avoid secondary radiation, and this is an unported cabinet.

The cabinet is machined from MDF panels of different thicknesses, and the absence of parallel surfaces helps to minimise the formation of internal standing waves, of course. The maximum cabinet dimensions are 15 x 13 x 10 inches, and each speaker weighs 17.5lbs. The drive units comprise a 6.5-inch woofer with a magnesium cone and a 'super linear motor', and a one-inch aluminium-dome tweeter with ferrofluid cooling and a textile surround. Both units are magnetically shielded. The connections are all standard 4mm sockets, colour and letter coded (A-D), and the supplied four-way cables are fitted with a colour- and letter-coded four-way banana plug that simply slots straight in.

The DSP processor/amp is surprisingly compact, but that's the beauty of Class-D amplifiers. Even the internal Audiomatch P500CE power supply is a switching type, so there are no heavy transformers and bulky smoothing capacitors to worry about, and it will accommodate mains supplies from 90-260V without any modifications. In addition to the eight speaker-output terminals, the processor also provides line-level outputs for up to two optional NHT S80 subwoofers, and the appropriate filtering characteristics can be recalled to the processor. In fact, the unit incorporates four different user-selectable crossover filter sets, and others may become available for uploading via the USB interface. 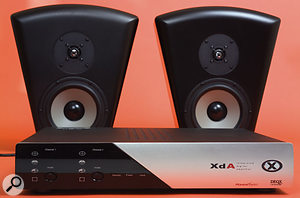 Four status indicators on the front of the amplifier show the settings of the internal DSP filter bank.Photo: Mark EwingThe processor/amp unit is equipped with both unbalanced phono and balanced XLR inputs for each channel, and they are wired in parallel. No input-sensitivity figures are provided, but I didn't have any problems hooking the unit up to either balanced console monitor outputs (nominal +4dBu) or unbalanced consumer preamp outputs. Needless to say, the analogue inputs are converted to digital, processed in the DSP crossover, and converted back to analogue for the amplifiers and outputs. The specifications give no information concerning the converters, but it would seem reasonable to assume a base sample rate is employed. A pair of XLR outputs (with associated unbalanced phono sockets) are provided to drive active (powered) subwoofers, and a slide switch above the XLRs determines whether the output is feeding one or two units.

The mains power switch is built into the IEC mains inlet, and there is a remote powering control facility with a group of four terminals. Two accept a standard external 12V DC trigger signal input, while the other two provide a trigger output for other equipment. An adjacent slide switch sets the trigger mode to be permanently on (On), to power up when an external 12V DC signal is present on the interface (Ext), or to power up when the input audio signal exceeds a very low threshold (Audio). This facility certainly makes it easier to operate a multi-channel surround-sound system.

There are also some other rear-panel facilities not mentioned in the handbook. A coaxial socket next to the Trigger input is labelled Accessory Power. I presume this to be a DC power outlet for some sort of future optional add-on unit. A single XLR input labelled Mic is presumable for a test alignment mic so that in-room correction can be carried out by the DSP processing. Finally, there is the B-type USB 2 socket which is mentioned in the context of enabling future firmware upgrades. However, I imagine it may also in the future offer remote control and real-time system alignment from a computer too, although the handbook makes no mention of this.

The M60 is an unusual design in many ways, making it difficult to find an alternative model that stands up for direct comparison. At roughly the same budgetary level are a lot of far more traditional but extremely capable designs. Favourite amongst those for me would be the ATC SCM20A Pro, or the PMC TB2A — both excellent two-way self-powered designs. However, the DSP crossover approach is increasingly common these days, with such contenders as the Dynaudio Air Series, as well as offerings from Genelec and Tannoy.

Photo: Mark EwingOnce set, the filter-selection options are automatically disabled, and the front-panel lights are extinguished after a short time period. To regain access, both channels' selector buttons have to be pressed and held, after which the indicators illuminate and filter changes are allowed. Three further hidden-until-lit icons indicate when the unit is in standby mode, when the unit is operational, and when there is a fault condition.

I experimented with a variety of speaker positionings and DEQX settings. In the end I favoured a freefield placement, well away from walls, and the second filter setting, which allowed the monitors to run flat down to 45Hz. I played with the two additional filter settings with mid-range and treble tweaks, but preferred the flat version overall. However, I have to say that I found the general balance a little forward and shouty compared with my PMC references. While this voicing certainly has the benefit of making it slightly easier to 'see' into mixes, I found it also a little wearing over extended listening. 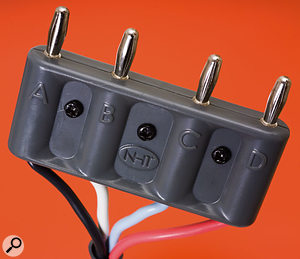 25-foot cables are supplied to connect each speaker to the amplifier, and they are terminated in a special four-pin banana plug to make setting up easy.Photo: Mark EwingThe bottom end is well defined, clear, and tuneful. As this is a sealed-cabinet design, the bass extends lower than the cabinet size might suggest, and it is free of the port resonances that afflict so many monitors. With such small bass drivers, it is not surprising that the M60s don't move huge amounts of air, and when cranked up they can feel a little lightweight, although the deep notes are actually there. Fortunately, this problem can be addressed easily enough with a decent subwoofer.

Imaging seemed a little disappointing to me. The speakers proved able to produce impressively wide and stable images that often stretched beyond the physical spacing of the cabinets, but depth cues weren't portrayed as well as they are by some other monitors. There was some sense of depth, but it was not as deep and lifelike as I am used to. I suspect this is related to the ruler-flat frequency response of each speaker — gentle response tailoring in the mid-band affects this psychoacoustic aspect dramatically.

Overall, the M60XD is an impressive system. The amplification is competent and capable, the digital crossover is well designed and optimised to the drive units, and the overall presentation is to a very high standard indeed. These monitors are detailed and revealing, and are well suited to mastering and critical mixing applications. The voicing may not be to everyone's taste, but the future release of system alignment software will enable users to measure the system's in-room response and optimise the voicing as they see fit. I still can't quite come to terms with the shape of the cabinets, though...