Pearl Mikrofonlaboratorium started in 1941, originally producing crystal and dynamic microphones. However, the Swedish company's intriguing rectangular condenser capsule design was introduced at the end of the 1950s and has enjoyed continuous development ever since. 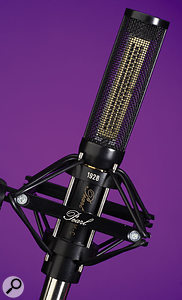 Pros & Cons Of A Rectangular Capsule

The traditional circular capsule membrane is easy to produce consistently, but its dimensional symmetry means that there is a single, very prominent resonance which has to be tamed using various engineering techniques. This often impacts on the frequency response and sound quality — particularly in the time-domain response. Pearl's rectangular capsule has different dimensions in each axis, which results in multiple resonances of reduced strength, which are therefore easier to control. Pearl claim that this produces a capsule with a more accurate and uniform frequency response, and that the improved time-domain response makes the mic sound more natural. The company's new ELM-C mic, under review here, retains the rectangular capsule concept, but this is an all-new cardioid capsule design with an enormous 7:1 length-to-width ratio.

The rectangular diaphragm also manages to combine the best aspects of both large- and small-diaphragm round capsules at the same time. For a start, the diaphragm's surface area equates to that of a circular diaphragm of about 30mm — roughly the same as in a typical large-diaphragm condenser mic. This large surface area translates into high sensitivity and an improved signal-to-noise ratio. The ELM-C produces an output of 22mV/Pa with a self-noise figure of 9dBA. To put that in context, the Neumann TLM103 and Microtech Gefell M930 share the top of the league tables with self-noise figures of 7dBA.

However, because the rectangular diaphragm is relatively narrow, the accuracy of the horizontal polar response is significantly more consistent with frequency than that of a large circular diaphragm — just like a small-diaphragm round capsule. Of course, the very long aspect of the rectangular capsule means that the vertical directivity is inherently pretty narrow at high frequencies, but that can be used to advantage when positioning the mic to minimise the pickup of floor and ceiling reflections, or when avoiding spill from unwanted sources. Of course, you also have to take a more thoughtful approach to placing the mic, because small changes of vertical angle can have dramatic effects on the captured sound.

The Pearl ELM-C is an unusual looking mic. It's body is rather long at 192mm, with a base section of 28mm diameter, increasing to 32mm for the grille. It weighs a modest 305g and is only available with a matt 'black chromium' finish. The grille is sufficiently transparent to reveal the spectacular side-address capsule in all its glory — to the uninitiated it may appear to be a ribbon mic rather than a condenser mic! One rather handy feature is that a small red LED is tucked at the base of the rearward side of the capsule, confirming at a glance that the mic is receiving phantom power. The mic's phantom power current demands are moderate at 2.7mA, and the specifications suggest the maximum SPL figure is 126dB for 0.5 percent distortion. The mic has no built-in high-pass filter options or pads, but doesn't seem to need them either.

The mic is shipped in a tough, foam-lined aluminium case, with an individual serial-numbered quality-control chart. Unfortunately, the plot spans a rather unhelpful 100dB dynamic range, but the trace still suggests the frequency response to be flat within about 2dB from 40Hz to around 12kHz, with a smooth and gentle roll-off above that, reaching roughly -5dB at 20kHz.

The review model was supplied with two optional shockmounts. The Type 1927 looks like a child's toy tractor tyre trapped in a ring with a standmount adaptor on it! The alternative Type 1928 is a variation on the more traditional 'cat's cradle' idea, but with typically Swedish styling, using a square central frame instead of a round one. The stand adaptor is mounted in one corner, and upper and lower rubber loops stretch from each corner to support an inner tube structure that holds the mic. The upper collar of the tube has a thumb screw to hold the mic securely in place, and the whole thing works well.

The first thing that strikes you when positioning the ELM-C is just how big the capsule is, and that automatically forces you to think carefully about how to orientate the mic and where to point it. Since the vertical polar pattern is so narrow at the high end, small changes of angle can alter the sound quality and level of off-axis sounds enormously — the vertical pickup angle is remarkably narrow and well defined. However, rotations have comparably little effect, because the horizontal polar pattern is very consistent, with a pretty broad frontal pickup area and a healthy lack of off-axis coloration.

As an example, if you place the mic vertically in front of a vocalist, tipping the mic up or down slightly really changes the character of the voice, as the chest, head, lips, and nose come more on or off axis. A large-diaphragm condenser mic behaves in a similar way, of course, as you tilt it back or forward, but the effect is extremely mild compared to the reaction you get with this Pearl mic. Mounting the mic horizontally instead produces a far more uniform or consistent vocal sound, but high-frequency reflections from side walls, or spill from other instruments in the studio are usefully attenuated. The extremely open single-layer wire-mesh grille means that the ELM-C is rather prone to popping, so a decent pop-shield is absolutely essential with this mic.

The marked difference in vertical and horizontal polar responses caught me out on a couple of occasions. The classic example was in miking a clarinet (although I'd expect the same problem with a sax too) — the sound was just badly balanced and a poor representation of the fullness of the actual instrument. What I had done, without thinking, was to place the mic vertically in front of the clarinet where I would normally position a mic to 'see' the whole instrument. Of course, the vertical polar pattern is so narrow that it was actually only seeing the mid-portion of the neck — hence the naff sound! Re-mounting the mic sideways (which looked rather odd and unnatural somehow) produced the much more balanced sound that I had been expecting in the first place.

The ELM-C is an expensive mic in anyone's terms, and there is some extremely strong competition at this price range. However, none of these mics have the unusual but potentially very useful quality of different polar patterns in the vertical and horizontal planes. Broadly comparable (on price) microphones from my own collection would be my favourite Sennheiser MKH40 small-diaphragm cardioid microphone, or (pushing the budget slightly) the Neumann TLM127 large-diaphragm mic. Alternatively, the AKG C414B XLS is a highly regarded and competent mic, and with the advantage of five switchable polar patterns.

Once you have mastered positioning this mic, its sound quality is impressive. There is something of a ribbon mic's smoothness and naturalness about the sound — it doesn't have the slightly dull top or emphasised mid-range that is characteristic of many large-diaphragm mics. In fact the ELM-C seems slightly brighter than a typical large-diaphragm mic, even though the diaphragm surface area is roughly the same, and the top end seems a little more detailed, yet the sound is also smoother and less 'hyped' or artificial. In many ways it sits tonally in the space between large- and small-diaphragm condenser mics. Not quite as bright, crisp, and clinical as a typical small diaphragm, yet brighter and smoother than a typical large diaphragm while retaining much of the same sense of scale.

After using the mic for a few days I realised I was thinking about the mic as a kind of high-output ribbon mic with a cardioid pattern. The ELM-C seemed to excel with the same kinds of sources that ribbons always shine on — percussion, brass, voices, and especially pianos all sounded superb. I didn't get a chance to try a string section during the review period, but I would expect the mic to perform extremely well if presented with this challenge.

The ELM-C is not the easiest mic to position, or the most forgiving if placed poorly. Its tech specs, while respectable, aren't the most spectacular either, yet I would gladly add a couple of ELM-Cs to my mic box given the opportunity and budget. The mic's unique directional characteristics allow a far greater level of control and selectivity than almost anything else — approaching the source discrimination of a figure-of-eight mic in the vertical plane, while retaining the broad smooth pickup of a cardioid horizontally. The only other mic I have used with a similar disparity in directivity between the two dimensions was the huge multi-capsule Microtech Gefell M970, and that proved very useful in a wide range of applications from miking choirs and orchestras to covering speeches from lecterns. The only thing that counted against the M970 was its enormous size, and the Pearl ELM-C is much more manageable in that regard. The ability to reject unwanted sources or acoustic anomalies in one plane, while capturing wanted sounds in the other is remarkably useful and even addictive!

This mic is relatively expensive in the UK, and that puts it in direct competition with some far more familiar and respected high-end large-diaphragm condenser mics. However, the ELM-C offers some intriguing and surprisingly useful features that are unmatched by its more traditional rivals, while matching the sonic quality expected at this price level, and that's what makes it important to audition this mic. Impressive.

An unusual cardioid microphone that has significantly different polar responses in the vertical and horizontal planes thanks to its unusual rectangular diaphragm. The sound quality is also more reminiscent of a ribbon than of a capacitor mic.