This innovative rectangular-capsule design aims to combine the desirable attributes of small- and large-diaphragm sounds. 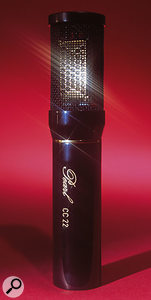 Photo: Mark EwingThe Swedish microphone manufacturer Pearl Mikrofonlaboratorium (PML) was founded in 1941 and was the first and only microphone manufacturer in the country until the early '80s. Pearl's first products were mainly crystal and dynamic microphones, but by the end of the '50s their 'trademark' rectangular condenser capsule was introduced. The development of this unusual design has continued to this day, and Pearl claim the design's unique characteristics provide one of the finest capsules available for music recording. This dual-membrane rectangular capsule is currently used in several studio microphone models, including the TL4, TL44, DS60, CC30, and CC22. A new omnidirectional model based on the same capsule is also about to be launched, called the CO22.

The rectangular capsule is unusual for more than just it's shape. The membrane is coated with vaporised aluminium rather than the sputtered gold employed by most other condenser capsule manufacturers. With different dimensions in each axis, the diaphragm is relatively free from resonances, compared to traditional circular membranes, and Pearl claim that the capsule therefore achieves a very flat and extended frequency response, quoting figures of 20Hz-25kHz (-3dB).

The CC22 is a fairly compact microphone and, although its size is more usually associated with small-diaphragm condensers, it's really a large-diaphragm design. It measures 145mm long, and the main part of the body is 28mm in diameter, increasing to 32mm for the capsule grille. The mic weighs a modest 270g, and is supplied in an aluminium case with a hard moulded-foam liner. A shockmount is supplied separately in a cardboard tube, but unfortunately the case has not been designed to accommodate the mic installed in its shockmount. It would even be a tight fit if you were prepared to modify the foam liner!

The microphone is a side-address design, which feels a little odd with such a slim body, but because the capsule is so visible the correct orientation is quite obvious — more than can be said for many microphones! The CC22 has a shiny black paint finish over a brass body, with the company and model name etched on the side to indicate the front of the polar pattern. The etching is in gold — presumably the underlying brass metal — but on the opposite side the serial number is etched and filled with black paint so that it is readable but not obvious. Just below the capsule section is a reasonably subtle gold-plated ring.

The capsule, which measures roughly 32 x 18mm, is supported on a compliant suspension and is protected behind a 45mm-long wire-mesh grille. The aluminium diaphragm is visible in the right lighting conditions behind gold-plated front and rear plates drilled with an array of holes. The audio output is provided through the usual male XLR connector at the base of the microphone, and it requires standard 48V phantom power, from which it draws a modest 2.7mA current.

The CC22 is intended for both studio and live-sound applications, and features a fixed cardioid polar response. The mic has a fairly typical sensitivity of 18mV/Pa with a self noise of 13dBA — not the quietest of large-diaphragm mics, but comparable with a lot of highly regarded products from other manufacturers. The maximum SPL figure is given as 126dB for 0.5 percent distortion, and there is no pad facility to increase the headroom. The head amp is a transformerless design, but there is also a variant model called the CC22H, with an alternative preamp. This provides a much greater output level — up over 13dB on the standard model to a sensitivity of 100mV/Pa. This version of the mic can also accommodate 6dB more SPL (132dB), although it has a slightly higher noise floor (up 3dB). The alternative design has a slightly higher output impedance of 500Ω, but requires a load of over 6kΩ and draws less phantom current (1.3mA).

The review model was equipped with the Type 1927 shockmount, which is basically a soft rubber doughnut about two inches long, supported in the centre by a metal ring connected to the stand adaptor (supplied with 5/8- and 3/8-inch thread barrels). The microphone slides into the rubber doughnut, and the size of the aperture and the 'stickiness' of the rubber ensure a safe and reliable mounting. I found this shockmount to be reasonably effective, as well as being particularly compact and discreet. However, there is also an alternative design called the Type 1928 which is a more traditional 'cats cradle' affair. This version comprises a square metal frame connected to the stand adapter, and the microphone is supported in a tubular centre section which is suspended from the square frame by a quartet of 'O'-rings above and below. It looks simple and is probably very effective — the mechanics of the design will inherently afford far greater mechanical isolation than the doughnut Type 1927.

I compared the Pearl CC22 with a variety of large-diaphragm mics from my collection, most of which come in at a slightly higher recommended retail price in the UK. These included the AKG C414B-ULS, the Blue Baby Bottle, the Neumann TLM103, and the Microtech Gefell M930. I also compared the Pearl with the Sennheiser MKH40 as a gold-standard reference, even though the latter is considerably more expensive. Other models which are broadly comparable on price (but which were not available to test) include the Audio Technica AT4047 and AT4050, the Beyerdynamic MC834 and the Rode NT2. 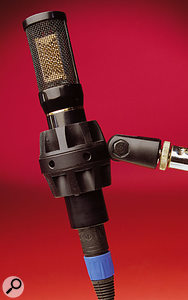 The CC22 in the Type 1927 rubber shockmount.Photo: Mark EwingThe Pearl CC22 sounds very smooth, with just a hint of a presence lift centred about 6kHz. The high-end response seems to roll of very gently above about 15kHz, which provides plenty of detail and clarity without the 'in yer face' brightness associated with so many condenser mics. The bottom end is equally well extended, with a similar gentle roll-off below about 40Hz — it's about -4dB at 20Hz, but if used close to a source the proximity effect will lift the low end response considerably.

The polar response is actually very tidy and consistent with frequency. The frontal area is wider than many, only dropping sensitivity by 3dB or so out at 45 degrees off-axis. The frequency response is also very consistent off-axis, and the rear rejection is extremely good at more than 25dB — although there is a pronounced high-frequency tail, giving a more hypercardioid response above about 4kHz.

I think part of the reason for the very consistent polar response is the relatively narrow width of the capsule. In the horizontal plane the diaphragm dimension resembles that of a small-diaphragm condenser capsule, which generally exhibits a consistent polar pattern with frequency. In the vertical dimension, the capsule is relatively large — larger than most large-diaphragm circular capsules, in fact — and this imparts a characteristic 'larger than life' element to the sound quality as well as helping to minimise self noise.

The CC22 is an honest-sounding microphone, tending towards neutral rather than coloured. In my comparisons it sounded closer to the AKG C414B-ULS than any of the other mics to hand. The Microtech and Neumann models were noticeably more coloured and heavier sounding. In terms of resolution and the ability to capture complex detail the CC22 performed very well, capturing the complex harmonics of a 12-string acoustic guitar quite creditably. The Sennheiser MKH40 set the benchmark here — as usual — and none of the test microphones really came close; but the Pearl, AKG and, in third place, the Blue all delivered neutral and acceptably accurate results.

I grew to like the Pearl a lot, and found it delivered great results on almost everything acoustic — piano, percussion, guitars, and strings. I didn't get a chance to try it on brass, but I would expect it to deliver a smooth, clean sound if placed carefully. It worked well on trained voices too, although it isn't a mic to flatter the vocalist in the way a big Neumann does. If the star quality is not already present in the source, the CC22 won't invent it!

The accurate polar pattern was useful in multi-mic situations, ensuring that the inevitable spill was captured cleanly and without undue coloration. As far as separation was concerned, the relatively high front-to-back ratio of the CC22 is better than many well-regarded mics, although care is needed to angle the high frequency hypercardioid tail away from bright sources! The side-fire configuration generally required a vertical orientation, which I found made the mic relatively inconspicuous in many cases — far more so than the bulky AKG C414B-ULS or Neumann TLM103. In my mic box, only the Microtech Gefell M930 is as discreet!

The Pearl CC22 is a very fine microphone, matching or exceeding the sonic capabilities of its marketplace peers. Although seen relatively rarely in the UK, this microphone deserves careful auditioning, because it offers a unique blend of properties making it a worthy alternative to the more familiar items. It is quite an expensive microphone, but it delivers a smooth, extended, and neutral sound quality, seeming to combine the resolution and precision of a small-diaphragm mic with a hint of the 'larger than life' character and body of a large-diaphragm mic. It is particularly well suited to classical or folk-music recording, where accuracy and detail are key attributes.

Using Pearl's unusual rectangular capsule, this fixed-cardioid condenser mic delivers a neutral and accurate sound, combining the consistent polar response of a small-diaphragm mic with the clarity and body of a large-diaphragm mic.