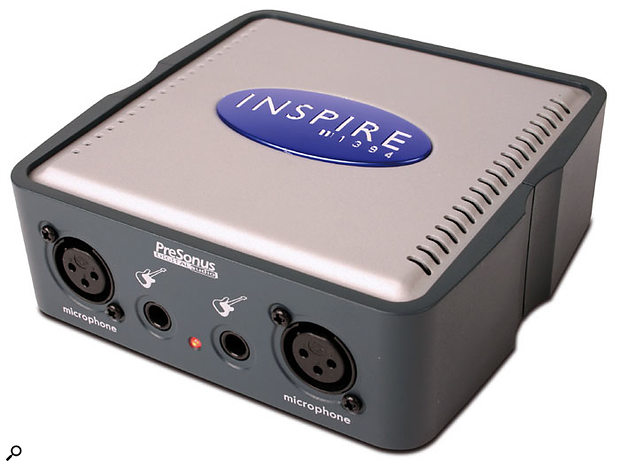 With their latest Firewire interface, PreSonus promise high audio quality at an affordable price, thanks to the use of software controls instead of physical knobs.

The PreSonus Inspire 1394 is a compact Firewire recording interface that works at up to 24-bit/96kHz and provides four simultaneous inputs with a stereo output. Two of those inputs are balanced mic preamps with switchable phantom power and peak limiting, while the other two are on RCA phonos that can be switched from line level to RIAA phono for direct connection of a record deck. The Inspire 1394 works under Mac OS X or Windows XP, and as current versions of those operating systems support multiple audio interfaces, you can use up to four Inspire 1394s at the same time to provide more I/O where needed.

Perhaps the most unusual thing about the Inspire 1394, though, is that while it has all the usual connections, it has no visible controls. That's become PreSonus have managed to add more features while keeping the hardware manufacturing costs down by moving all the necessary controls to a software control panel. One distinct advantage of this approach is that the control setup can be saved so that when you return to a project, you can be sure all the settings are exactly as they were first time around. The Inspire 1394 can be powered from an external adaptor or parasitically from a six-pin Firewire socket, and works with all the common recording software.

Cosmetically, the burger-box-sized Inspire 1394 exudes desirability with its chunky but clean lines. The front of the unit houses the mic inputs plus two high-impedance instrument jacks for the direct connection of guitars or basses; the microphone and instrument preamplifiers draw on PreSonus's analogue design expertise and are claimed to offer low noise and low distortion. Other than an LED that shows you the unit is alive and has digital sync, that's it for the front panel! Around the back are unbalanced RCA phonos for inputs 3/4 and for the stereo output, but there's also a stereo mini-jack (3.5mm) output and a further 3.5mm headphone socket. Other than that, there are just two six-pin Firewire sockets and a power input, so you can plug in the supplied adaptor if your computer only has a four-pin Firewire socket and thus doesn't provide power.

The Inspire can be used to connect a turntable to your computer, thanks to its RIAA phono inputs.As I mentioned, the Inspire's uncluttered appearance has been made possible by putting all the necessary knobs and switches into a software control panel. Like most interface control panels, this allows you to set up the sample rate and buffer size (helpfully shown on the Windows version in terms of milliseconds of latency — on the Mac you set this up in the usual Core Audio way), but you can also set the input gain, switch the phantom power and limiter on and off, engage a 10dB preamp boost, and adjust headphone volume and main output level. There is also zero-latency input monitoring, with adjustable balance of the input source against the DAW output. All settings can be saved for reloading at a later date. This is, on the whole, a really good idea, but I still feel more comfortable with a physical analogue master level control when using active monitors, so that I can turn them down in a hurry if anything goes wrong or if the software crashes in a mode that feeds peak-to-peak white noise to the output! To be fair, modern operating systems are pretty robust in this respect but nevertheless...

Given the very attractive price of this unit, the bundled software that comes with it seems all the more enticing. The inclusion of Steinberg's Cubase LE is no surprise, and provides a perfectly competent sequencing platform for Mac and PC, while there's also Sony's PC-only Acid XMC for those who are more into loops. You also get Minnetonka's Discwelder Bronze for CD and DVD authoring, some Discrete Drums recordings of live acoustic drum parts for use in your own songs and 25 effects plug-ins. On top of this there's also around 3GB of drum loops and other samples on the included DVD. You really could just add a mic and a pair of headphones and start recording an album — though a MIDI keyboard would also be a distinct advantage. 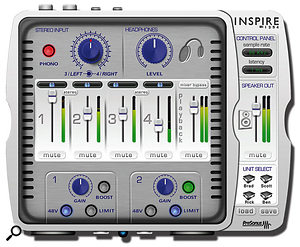 Almost all of the Inspire's features and options are set up via the software control panel.I tested the Inspire on my Mac system running OS 10.4.3, where the unit was recognised by Core Audio without fuss. The control-panel software installed first time, after which I was in business. In most respects, the Inspire worked flawlessly and intuitively, but there was a problem with my particular Mac G5 — albeit one which has also tripped up a few other interfaces and at least one USB microphone. This manifests itself as a low-level digital whine, which can be heard over the monitors but isn't recorded to your sequencer. Isolating the Inspire's output using a stereo DI box with ground lift immediately solved the problem, so it seems to be due to a ground loop between the Firewire cable and the audio ground, caused by the way the G5 is wired internally. My MOTU 828 MkII interface works well enough in the same setup, but it is common knowledge that some G5s cause monitoring noise issues with some audio interfaces, whether Firewire or USB. Often the problem can be solved by switching off Processor Idling, for which you need to download the CHUD utility from the Apple web site. CHUD is part of a free Developer Tools download, but unless you're unlucky enough to have one of these awkward G5s, you shouldn't need it.

Having the controls on screen is in many ways more friendly than having them on the box, as you can put your interface wherever it is convenient to do so, and don't need to adjust anything. What's more, the settings are remembered by the software control panel so you can call them up later. The mic preamps are gratifyingly clean, and though not esoteric, they perform as well as the preamps on a decent mid-price mixer and gave me no cause for concern. I liked the software-controlled internal mixer for zero-latency source monitoring, which again is very easy to use, while the free software and samples provide a thick layer of icing on the cake! The Discrete Drums samples are particularly useful if you need the sound of real drums, as they are multitrack versions of real performances in various styles, and very good they sound too.

With the exception of the background monitoring noise problem that my Mac G5 seems so keen on bestowing on selected hardware, the Inspire worked perfectly, installed easily and sounded very clean indeed. The software control panel is a great idea and it really works, while the bundled software is very welcome, even if not quite all of it works on both the Mac and PC platforms. It's also good to know that you can use multiple units to get more I/O if necessary, though if you know in advance that you're likely to need more I/O, there may be better solutions available to you than stacking up four Inspires.

Over the past few years I've come to really respect PreSonus gear and the very affordable Inspire lives up to the design standards they've set with their more expensive products. The interface market is pretty keen at the moment so I won't say that this is the only contender for your money, but if you need a compact four-in, two-out solution with a pair of decent mic preamps built in, the Inspire has to be on your shortlist.

The market for small recording interfaces is a crowded one, especially if you consider USB as well as Firewire devices. Among the many devices on offer, M-Audio's Firewire Solo is a four-in/four-out interface with one mic preamp and one high-impedance instrument jack; it also boasts balanced, full-sized jack outputs and S/PDIF I/O, but lacks the Inspire's soft limiting and RIAA turntable input.

The same company's Fast Track Pro delivers up to four-in/four-out functionality via USB, with two mic preamps that double as instrument inputs, S/PDIF and MIDI I/O and balanced outputs, but again, no limiting or RIAA input. Edirol's UA25 is a USB interface with two mic preamps which, like the Inspire's, have phantom power and built-in soft limiting; it also has MIDI and S/PDIF digital I/O and full-sized output jacks, but no turntable input, and is only a two-in/two-out device.

Finally, Terratec's Phase X24FW is a little more expensive, but offers two-in/four-out recording via Firewire with two phantom-powered mic/instrument preamps, analogue insert points, S/PDIF and MIDI I/O and support for 192kHz, although again there's no limiter or RIAA input. One feature of the PreSonus Inspire that appears to be unique in this bracket is the ability to use up to four of them simultaneously.

The Inspire is a very neat combined preamp and interface for small systems, and can be used in multiples of up to four units where more I/O is needed. I particularly like the software control panel and the generous library of bundled software.