Overloud are on a mission to prove that convolution reverb can be brash, bold and, above all, big!

When convolution plug-ins first appeared, it took a pretty cutting-edge Mac or PC to run even a single instance in real time. Now that we all have CPU cycles to spare, convolution reverb no longer seems quite such a luxury, especially as most DAWs now include a convolution plug-in for free. With that in mind, third-party developers have been exploring ways to take the technology beyond merely applying ‘samples’ of real spaces to recorded audio, and to address the perception that, for all its realism, basic convolution can sound cold, static and uninvolving.

We have already covered the likes of Liquidsonics’ Reverberate and HOFA’s IQ-Reverb in these pages, and the newest kid on the block is Rematrix from Italian developers Overloud. Rematrix’s USP is that it’s not based around a single convolution ‘engine’: instead, each instance combines the signals from up to five different impulse responses loaded simultaneously. And should the resulting blend not be warm or thick enough for you, it can be augmented by an algorithmic reverb, before being passed through various effects and processing stages until it reaches a sufficiently soup-like consistency.

Despite all that’s going on inside, the basic Rematrix interface is reassuringly simple. Five sliders control the relative levels of the five impulse responses that are contributing to the sound. The idea is that each offers a different style of reverberation, namely Hall, Room, Plate, Early and Special. Above these is a master section; by default, this displays a signal-flow chart showing the order of the various processing modules. Clicking on one of them enables you to adjust its parameters, though the order is fixed. It can also be switched to a waveform display, where the composite impulse response of all the active impulse responses is shown above a global Rev Time slider that adjusts all their lengths individually. 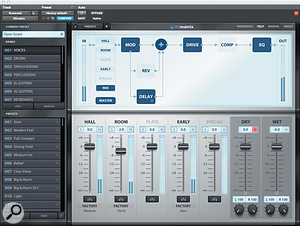 For more control over the individual impulse responses, meanwhile, clicking on the icon below a fader brings up its Extended Controls in the window to the left that usually houses the preset browser. From these controls, you can load different IRs, apply equalisation, pan, delay and stereo width adjustment, and manipulate the length of the IR and hence the duration of the reverb it generates.

A substantial library both of impulse responses and of presets is provided, and these do a good job of showing off the strengths of Rematrix. As you might expect from any reverb plug-in that includes both a compressor and an overdrive module, these strengths lie mainly in the realms of characterful, obvious reverb. If you want to subtly augment the hall ambience on an overly dry classical recording, or sprinkle a few early reflections on a clean acoustic guitar, well — it’s possible, but only by disabling most of Rematrix’s features, and perhaps by loading your own impulse responses. What this plug-in is really about is reverb that draws attention to itself and becomes a feature of your track. So, if you like thick vintage vocal treatments, absurdly wide and rich lead-guitar ambiences or massive snare-drum tails, you’ll find them in abundance here. It’s not for nothing that the preset library includes categories such as ‘Smash Rooms’ and ‘Ultrawide’!

The novel multi-IR engine and the well-thought-out interface make it relatively easy to take the factory presets as starting points and build on them. For instance, it’s a matter of moments to rebalance the individual impulse responses, or solo each in turn to hear its contribution to the overall sound, and although there are a lot of individual elements in Rematrix, none of them has more than three or four controls each. The effects are well suited to the task in hand, offering sufficient flexibility to cater for a wide range of sounds without ever becoming confusing or overwhelming. And although it might seem odd to apply overdrive or compression to a reverb return, both are actually quite useful in their ways. Many original reverb chambers or plates would have been driven by tube amps and other electronics prone to saturation, and the overdrive here can definitely add some vintage character. 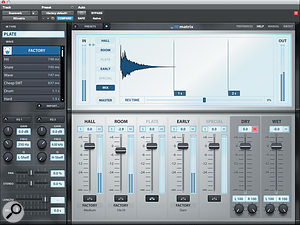 The waveform display shows a composite impulse response calculated from all the active elements of the Rematrix patch. Clicking on an individual element brings up its own editing parameters in the window to the left.The one thing I really missed, though, was a global pre-delay setting. As things stand, you can adjust pre-delay separately for each IR, which is tedious, or use the delay module that’s part of the global effects chain as a pre-delay, which precludes you using said delay module for its intended creative purposes. In any case, neither is an option for the algorithmic reverb — which, as far as I can tell, can’t be delayed at all.

Apart from that, I found working with Rematrix pretty much effortless, and if I rarely departed too far from the presets in practice, that’s because there are a lot of them, and many are very usable just as they come. Usable, that is, if you want big, thick, meaty reverbs that really stamp their presence on your tracks! While I’m not sure Rematrix is sufficiently versatile that I’d want it to be my only reverb plug-in, then, it has its own distinctive take on convolution; and although the asking price makes it a significant investment, it’s one which many people working in pop and rock production will find very worthwhile.

If you’re after characterful convolution, there are now quite a few options on the market. EastWest’s Quantum Leap Spaces has some lovely vintage-themed impulse responses, while HOFA’s IQ-Reverb lets you edit its settings almost as though they were algorithmic patches.

If you want your reverbs to sound not only lifelike but larger than life, Rematrix will be right up your street.