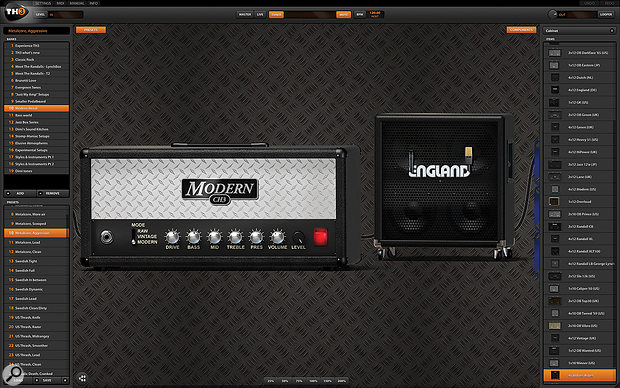 With new amps, effects and a stripped-back GUI, is Overloud’s modelling software ready to play a headline slot?

Overloud’s amp modelling software perhaps hasn’t achieved the same high profile as offerings from Native Instruments or IK Multimedia, but that might all be about to change with the latest version. TH3 introduces a wonderfully simplified interface and racks full of new virtual gear. In addition to seven new cabinets and 10 new effects, there are 24 new amps — 21 for guitar, three for bass. These include officially approved models from Randall, DV Mark, Brunetti and THD, which sit alongside models based on famous Fenders, Marshalls, Oranges, Mesa/Boogies and so on. Overloud have developed proprietary non-linear algorithms, too, which have noticeably improved the sense of realism compared with TH2. The new software feels like playing through an amp, reacting perfectly to how the strings are struck.

The software operates as a VST, AU, RTAS or AAX plug-in, as well as in stand-alone mode for both Mac and PC. TH3 can also be hooked up to MIDI controllers, for switching presets on the fly or adjusting parameters. The ‘intelligent’ MIDI connections make setting this up a snap: right-click a parameter, select “Learn MIDI for current preset”, waggle the controller and you’re done.

The most dramatic improvement is the significantly clearer GUI. A striking orange-and-black theme provides great visual feedback in dark environments, such as on stage or in the studio, and the interface can be expanded to be as large as your monitor will allow, with Retina support for those using high-resolution displays. I tested TH3 on an iMac 5k Retina, which proved an absolute joy (though it functioned perfectly well in full-screen mode on a netbook, too). Buttons for zooming in and out, from 25 to 200 percent, provide a view of the overall signal chain or better focus on individual elements. Side panels, with Presets on the left and Components on the right, can also be collapsed to provide more screen real estate for active modules.

Amps, cabs and effects can be dragged and dropped right onto the main screen, with hardly a pause in the audio output. Components can be swapped out directly by right-clicking a module, choosing “Replace with...” and selecting another module from the drop-down menu. This makes the process of setting up a new rig from scratch or trialling new components tremendously intuitive.

There are over 1000 presets available right out of the box. These are organised in well-labelled banks, each comprising up to 128 slots, and they cover one hell of a range, including bass tones and guitar presets that span everything from clean and crunchy rhythm parts to the most extreme, djent-style high-gain setups. And there’s plenty of inspiration for sonic astronauts, too. For example, there are banks dedicated to ‘Experience TH3’ (where you can try out all the new gear), ‘Just My Amp’, ‘Bass World’, ‘Elusive Atmospheres’ and ‘Modern Metal’. What’s more, users can add an unlimited number of their own banks, so the possibilities are endless for either complicated live setups or for multiple effects changes that would otherwise require some serious tap dancing skills.

The 21 new guitar amps (and five guitar cabs) and three bass amps (and two bass cabs) add a wealth of choice to the original TH2 modules. However, all of those are still available in TH3, so any saved presets can be carried across seamlessly. There are splitter and mixer modules included, too, for creating dual amp/cab/effects setups. The new guitar amps include models of famous and/or rare Orange, Fender, Engl, Marshall and Roland classics, all of which offer fantastic and highly playable representations of their real-world counterparts. However, the cream of the crop has to be the officially endorsed models: the Brunetti Metropolitan, a rough-around-the-edges two-channel 10W combo with a Texture control for morphing from vintage- to modern-style distortion (much like the ISF switching seen on Blackstar amps); the Brunetti Singleman, another combo, but with the ability to switch between 35W, 16W and 4W power-amp stages; and the DV Mark Maragold, a simple yet effective 40W all-tube head with dynamic clean and overdrive channels.

There are 10 new effects, including seven stompboxes: Brunetti Burning Box and Vanilla effects; a Treble Booster; a Wham-me based on the DigiTech Whammy pedal used extensively by the likes of Tom Morello; an intelligent noise-reduction pedal called Quiet; and the CT Pre overdrive and GEQ-LoFreq, a graphic equaliser for bass. Special mention should go to the Quiet pedal, which really tames the noisiness of high-gain amps when you want to mute the guitar. I was also particularly impressed with Wham-me, which compared favourably with my own Whammy stompbox, although a MIDI expression pedal is obviously required to get the most out of it. 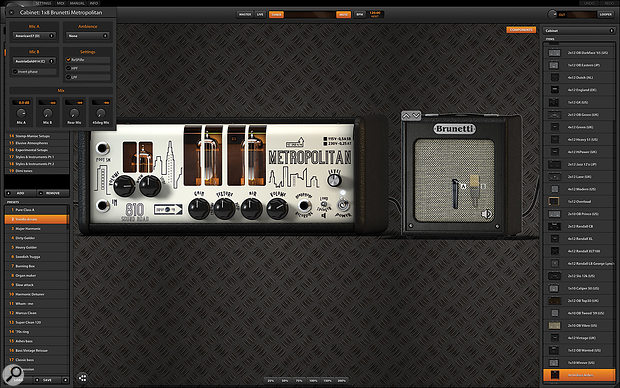 TH3’s cab modelling boasts extensive virtual miking options, as well as the option to load your own cabinet impulse responses.

The pick of the new effects, however, are the three stunning rack processors: Harmonizer, Organizer and Ring Modulator, each of which layers synth-like tones to your sound. Organizer, which adds octaves and filtering effects, tracks just as well as my EHX HOG pedal, and it’s perfectly at home with chords, though it’s advisable to keep these fairly simple — fourths, fifths, sevenths and octaves sound best. Subtly blending these effects with my regular guitar sound helped create some powerful hybrid tones. Gorgeous, pad-like layers can be created, for example, by splitting the signal, with one chain set up to maintain the attack and the other soaked in dense harmonic effects.

Double-clicking a cab brings up a range of options. There are up to six different room types for each cabinet, with the option to place two different cabs in two different rooms. There are 18 mics, including models of the usual dynamic and capacitor suspects. Any two can be used to mic a cabinet in a variety of positions and distances. Left-click dragging adjusts a mic’s position relative to the speakers, while a right-click drag adjusts the distance from the cab itself. Then there are two non-adjustable mics, including a mic behind the cabinet, which gives a roomier sound, and one 45-degree mic. A simple four-knob mixer section is always on hand for balancing your mics.

Fine-tuning options are also available in the form of Mic B polarity inversion, high- and low-pass filters and the ability to switch off Overloud’s Real Sound Pressure Response technology, which gives users the feeling of playing in front of a fully cracked stack but can sometimes muddy a mix.

The most interesting aspect of the cab section, however, is the built-in convolver. Selecting Cabinet IR in place of a standard cab gives users the ability to import mono impulse responses, in the form of WAVs, from external sources. This means that the cabinet section is endlessly customisable. Also, the bass cabinets jettison the 45-degree mic option in favour of a tweeter level control, which is very useful.

There’s a Looper included, too, and while it isn’t quite as sophisticated as some of rival offerings, including some DAW-based loopers, it does just enough for quick sketches, jamming or soloing over a chord sequence. For me, less is more when it comes to recording ideas, and TH3’s Looper offered just enough for my needs. What’s more, you can save each take as a layer or export the full mix exactly the kind of flexibility that guitar software should offer.

The Best Of Both Worlds

The real beauty of TH3 is the way that it’s simple enough to use straight away, but deep and versatile enough to give results when you really want to hunt down a specific tone. The presets offer everything you need to nail a particular style, or to get experimental with hybrid tones and effects layers in the studio. On top of this, it offers great value for money, with an amazing array of models and miking options from which to choose. It also looks, sounds and operates much better than previous versions. It’s the complete package.

IK Multimedia’s AmpliTube 4 and Native Instruments’ Guitar Rig 5 both offer a host of amp and cab models, while Waves’ GTR3 and Studio Devil’s Amp Modeler Pro are also well worth checking out as alternatives.

Overloud have really turned it up to 11 this time, building on the previous versions to make TH3 a more fully fledged offering at a great price. It has a stark, simple GUI, plenty of new modules and, due to a superb range of presets covering all styles, it has that instant kind of plug-and-play appeal that’s missing from some rival offerings.