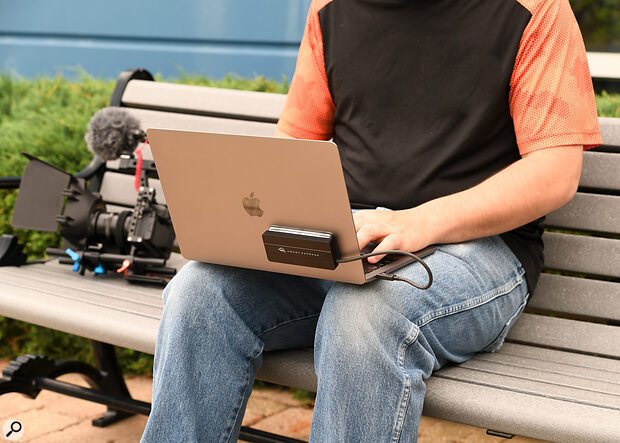 External storage becomes so fast and so small it might as well not be external at all!

Other World Computing, or OWC to their friends, make computer accessories and peripherals targeted at creative types. What this means in practice is a focus on Mac compatibility, extensive use of the Thunderbolt connection protocol, and an emphasis on high data bandwidth and capacity. All of those qualities are very much on display in their Envoy Express, a bus‑powered Thunderbolt storage device designed especially for mobile use.

The Envoy Express is a plain black rectangular case measuring around 10 x 3 x 1cm, with a short captive Thunderbolt cable that terminates in a Type C plug. Two bolts unscrew to allow the base to be removed, whereupon it’s possible to attach your choice of M.2 solid‑state drive to the internal NVMe connector. This is currently the fastest standard in widespread use, meaning that a drive hosted on the Envoy Express should be usable for high‑demand real‑time applications such as recording high‑resolution video or streaming orchestral sample libraries. 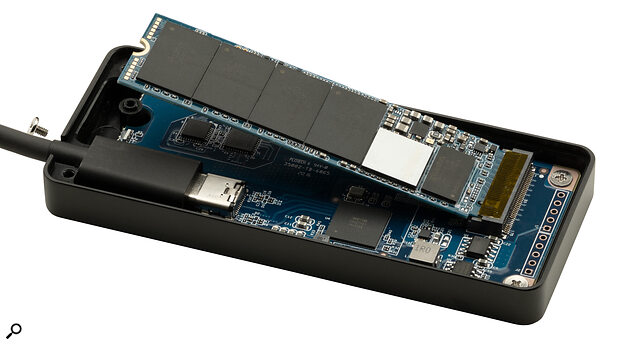 The two slots that run along the base of the long sides are not decorative; also supplied is a clear plastic mount with an adhesive backing. The idea is that you attach this to the back of your laptop screen, whereupon the Envoy Express securely slides into matching rails in the mount. The mount is only about half a centimetre deep, so your laptop should still fit into its case with it in place.

The performance of the Envoy Express will depend on the drive, and the review unit was supplied with an OWC‑branded 1TB Aura P12 Pro. Fitting this was simple, and Blackmagic Design’s Disk Speed Test utility reported write and read speeds of 1338 and 1472 MB/s respectively: fast enough for real‑time recording and playback of all current video formats, and far more than could be needed in most audio contexts. Suffice to say this is much more than just a backup device. In effect, it doubles the storage of a typical Thunderbolt 3 or 4‑equipped laptop without really altering its footprint at all. The only fly in the ointment is that it does not have any Thunderbolt ports of its own, so if Apple have only blessed your machine with two Type C ports, you may need a Thunderbolt hub to connect audio interfaces or dongles.

This is much more than just a backup device. In effect, it allows you to massively expand the storage of any Thunderbolt 3 or 4‑equipped laptop without really altering its footprint at all.

Fortunately, OWC also have buyers covered there, in the shape of the latest version of the Thunderbolt Dock originally reviewed in SOS January 2021. Priced at £247.34$279, this is now Thunderbolt 4‑ready, and makes some other neat improvements too. It’s significantly more compact (although the external PSU is almost as large as the Dock itself), and whereas the previous version offered two Thunderbolt sockets along with a USB Type C and a Mini DisplayPort, there are now four Thunderbolt‑capable Type C sockets.

There are also four USB Type A sockets; three support the full 10Gb/s USB 3.2 standard while the fourth is a dedicated USB 2.0 socket for legacy devices. The headphone socket, card reader and Ethernet port are all present and correct. You’ll need macOS 11 ‘Big Sur’ or later to use it, but once again, this is a very compact and portable way of giving any modern Mac the I/O quotient it deserves!

Another excellent pair of peripherals that will appeal especially to Mac users needing portability.