A decent virtual acoustic piano instrument is something the vast majority of computer-based studio owners would see as an essential part of their sound palette. Improvements in the ability of software to recreate ‘real’ instruments such as acoustic pianos have mainly been achieved by more detailed sampling. This means greater numbers of velocity layers, multiple microphone recordings and key-switched sample layers containing different performance articulations. Of course, the down side of this is gigabytes of sample data, which is fine if your computer has more processors, disk space and RAM than you can shake the proverbial drum stick at, and provided you’re happy to twiddle your thumbs while the instrument loads.

However, there are occasions when a more compact and computer-friendly format is required, and Musicrow’s PianoBoy PC VST Instrument is an attempt to provide just that. The instrument is based upon Musicrow’s SCS technology, which combines sampling with convolution and synthesis, and the consequence is a virtual piano that only requires 35MB of disk space and loads very quickly. In testing within Cubase 4, it also seemed to place a relatively modest load on my CPU, although this is dependent on the number of notes playing simultaneously. Installation of the plug-in simply requires the supplied DLL file to be copied to your usual VST plug-in folder.

PianoBoy is supplied with a short PDF manual. While this gives details of the instrument and the installation process, the ‘operation’ section is the shortest I’ve seen for any plug-in: it reads “PianoBoy is very easy to operate: just press the keys.” This is totally accurate, and the only decision the user has to make is the selection between the standard patch and a somewhat darker version. The user interface has no other controls, bar a display of a virtual keyboard.

All of which is great — but compactness, responsiveness and ease of use are issues of a technical nature. Is PianoBoy up to the sound quality of a decent multisampled piano, or does it bring back memories of early GM equivalents? Fortunately, it sounds pretty good. The standard patch provides a nicely balanced and fairly neutral acoustic piano tone reproduced reasonably dry (so you need to add your own reverb, if required). The ‘Dark Piano’ patch has slightly less top end and is consequently warmer-sounding, but very usable. Both patches respond very well to playing dynamics and, with 22-note polyphony, you are unlikely to run out of notes providing you don’t get your foot stuck on the sustain pedal. While I’m sure that for solo piano many players would, in an ideal world, prefer to turn to one of the bigger sample-based instruments, PianoBoy is a very respectable alternative if your budget or PC won’t stretch to that approach. A demo version is available via the Musicrow web site and is well worth auditioning. John Walden

Bluenoise plug-ins are the creation of Bjarte Ludvigsen who, kind soul that he is, intends them all to be free (although PayPal donations are welcome). Two plug-ins are currently available for download via the Bluenoise web site: My Drumset, the subject of this review, and Theremin. A third, The Boob Collection, is in development, and promises to be interesting, given the graphic on the web site! 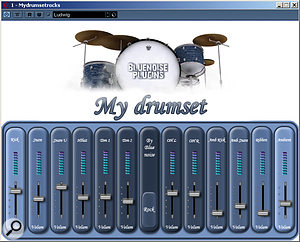 My Drumset is a 130MB download as a WinRAR archive and contains two DLL files. These are simply copied into your VST plug-ins folder to install them. Both are quite large; mydrumsetrocks.dll is 210MB while mydrumset70s.dll is 90MB. The size is because the drum samples themselves are built into the plug-in and, as the names suggest, they contain different drum kits. The former is based on samples from a Ludwig kit, with a choice of two different snares, and sounds very good indeed — it would certainly work with all kinds of rock and pop material. There are no details on the second kit but it sounds somewhat less powerful than the Ludwig kit.

Both plug-ins are, in essence, MIDI-triggered drum-sample playback instruments, and anyone familiar with EZ Drummer will soon see where the inspiration for My Drumset has come from. The plug-in features separate channels representing different mic positions on an acoustic kit. These include kick, snare (one mic above and another below), hi-hat and toms. These close mics are supplemented by left and right overheads, ambient kick and snare mics and ribbon mic, and an overall ambient mic. This arrangement gives the user considerable flexibility to balance the kit and add ambience as required. In Cubase 4, only the kick-drum channel was active when I opened an instance of the plug-in; the others needed to be activated via the Cubase VST Instruments panel before they appeared in the Cubase mixer. This minor issue aside, My Drumset behaved itself very well during my testing, although it is perhaps a little CPU-hungry. The drum sounds are mapped pretty much to the GM standard, and seem to include enough velocity layers to create a very realistic performance. There is also plenty of variety in the cymbals, and a nice ghost roll and flam on the snare.

Given that this is a free plug-in, the quality of the drum sounds available is really quite remarkable and, sonically, I’d be more than happy to use these sounds in a commercial project. It would be nice if Bjarte could produce a short PDF manual to accompany My Drumset, but otherwise all one can do is hope that those who do use the plug-in take the time to make a donation. It’s a very impressive piece of freeware, and I’m looking forward to trying Theremin and seeing what The Boob Collection has to offer when it is released! In the meantime, My Drumset is well worth the 130MB download if you want a decent acoustic drum module but don’t have the budget for one of the big-name products. John Walden