Overloud's Breverb plug–in is designed to offer high–quality algorithmic reverberation, but with a low CPU load. In fact, Overloud claim to have opened 120 stereo instances on a 2.4GHz Core 2 Duo Macbook Pro, which is pretty impressive! It can be used in mono, mono–in/stereo–out or stereo–in/stereo–out configurations, supports all the major plug–in platforms, and is authorised to an iLok key.

Four algorithms emulate Halls, Rooms, Plates and Inverse reverbs. All are apparently designed to replicate the sound of classic hardware reverbs, so I might hazard a guess that they've used the classic Lexicon sound as their inspiration. I was rather hoping Breverb would also have a dedicated Ambience section, but unless one is planned as an addition for the future, I seem to be out of luck. 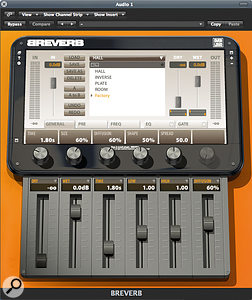 Once authorised or launched in its time–limited demo mode, the plug–in opens looking like a desktop remote control. You can have it expanded to show expert controls or keep it simple with just a handful of key parameters accessed by the knobs. The expert parameters cover different things depending on the algorithm selected but typically provide more EQ or diffusion options, as well as allowing adjustment of any internal modulation the algorithm may use. The expert section also lets you create gated reverb effects, with the usual gate controls joined by Shape and Slope parameters with which you can tailor the release curve.

The core knob–controlled features are divided into five pages, accessed by tabs. Three small buttons allow the fader section to be hidden or shown either below or at the side of the main section. Up to six faders can be shown, and they are freely reassignable to any adjustable parameter from any of the pages, by means of a drop–down menu above each fader. This mapping is saved with user patches. In the central area of the window you can select algorithm types or the presets associated with them, and you'll also find the usual save, load, delete and A/B compare buttons. Separate faders set the wet and dry signal levels, though the default when a preset is loaded seems to be 100 percent wet, which assumes you'll be using the reverb in a send. This can be changed in the preferences, along with other user attributes.

As with the reverb units it seeks to emulate, the reverb decays don't follow a simple exponential curve but are somewhat more complex, some of them building up more slowly before they decay. One of the reverb parameters controls the apparent size of the space being emulated, while another adjusts the shape of the room and determines how the early part of the reverb builds up.

The reverbs do have a 'classic' sound to them, but because of the restricted amount of CPU overhead allowed them, they don't have the same finesse as the more costly hardware units, and the synthesized reverb doesn't blend with the dry sound in such a natural way. With a Lexicon reverb, for example, there's a lot of early–reflection information that adds a sense of place to the dry sound, so the more you turn up the reverb level, the more the sound seems to recede back into the room. That doesn't really happen here to the same extent, though the treatments on offer can still sound extremely good in the context of a mix. You get the sonic 'glitter' that a good synthetic reverb provides, especially if you reduce the diffusion for a gritty, vintage sound, and you can add a fair amount of reverb without it getting in the way of the dry sound, which is always a good test. There's plenty of adjustability, and though you can't create really convincing small room ambiences, the range you do get covers most music–production territory including, some very believable plates and great–sounding rooms.

The claim to challenge high–end algorithmic reverbs may be stretching things a bit, but Breverb is still sonically impressive, especially when you consider its very small CPU footprint. It sounded noticeably more natural than Logic's Platinumverb and subjectively was at least on a par with IK Multimedia's CSR plug–in. If the reverb that comes with your DAW is a bit on the disappointing side but you don't want to throw away all your CPU overhead, Breverb is definitely worth checking out, and thanks to the free demo period, you can do this with no risk. Paul White

TC Electronic's Tube–Tech CL1B plug–in, which is available both for TC's Powercore platform and as a TDM plug–in for Pro Tools HD and HD Accel systems, has been created using a digital modelling system that works by analysing the behaviour of individual components, to recreate the true analogue sound of Tube–Tech's rather lovely all–tube CL1B compressor/limiter. With a GUI that follows the hallmark blue front panel of the real thing very closely, the CL1B plug–in has a compression ratio continuously variable from 2:1 to 10:1.

One of this compressor's most distinctive features is the Attack/Release Select switch, which offers three options. Fixed disables the manual Attack and Release controls and sets an attack time of 1ms coupled with a 50ms release time, while the Fix/Man option combines the release times of the Fixed and Manual modes in such a way as to implement a shorter release time for brief peaks and a longer release time for longer peaks. This mode is designed primarily for compressing mixes or submixes.

The third option is the Manual mode.

A three–position Sidechain/Link switch becomes active when the plug–in is inserted on a stereo channel, allowing you to set whether the gain reduction follows the signal in the left channel, the right channel or a combination of both. The VU meter can show the input level, output level or amount of gain reduction, in either channel or both. The In switch on the left of the panel activates or deactivates the processing, as you'd expect, but leaves the meter working with the plug–in still loaded onto the Powercore DSP, so that it can be engaged without delay; by contrast, the rotary Off/On switch frees up the Powercore DSP when the plug–in is off. Gain compensates for the gain loss during compression and, despite its physical position on the panel, comes after the gain–reduction section, with up to 30dB of available make–up gain.

You can run up to two instances of the plug–in (in stereo, 44.1kHz) per DSP chip on second–generation Powercore hardware (Compact, Firewire, Express, PCI MkII or Unplugged). The plug–in count is halved at 96kHz sample rates.

Like the original, the plug–in seems to have the knack of making things sound better just by passing them through the compressor, even when it is doing very little in the way of processing. Furthermore, when you do add compression, you have to go a long way before it becomes too obvious. Most of the time, the mix simply sounds louder and more confident, with the individual elements blending together better. The Fix/Man mode works best on mixes where fixed attack and release times may not be ideal, due to varying dynamics in different sections of the song. I tend to prefer the low–threshold, low–ratio approach to mix compression, but even with more assertive settings, the end result almost always sounds well–controlled and musical. Vocals really come to life at medium-ratio settings, and you can afford to apply more gain reduction than you can with many competing designs or other plug–ins before the side–effects become noticeable. Similarly, you can really beef up the sound of a kick drum or complete kit by combining a longer attack time with a shortish release. I also found that I could afford to be quite heavy–handed with the compressor when it came to treating bass parts, and when the side–effects finally do become audible, they are still quite musical. With most compressors I find myself holding off a bit in case I damage the sound I'm trying to process, but this one just seems to egg you on to try adding more.

There's no denying that as plug–ins go, this one is quite expensive, and for a little over four times as much you could own the real thing. Nevertheless, the real thing won't allow you to use multiple or even stereo instances without spending more cash, and though there will always be heated discussions as to how accurate any form of modelling can be, the CL1B plug–in sounds gorgeous and is very forgiving even when you lay it on with a trowel! It's probably fair to say that when it comes to emulating high–end analogue gear as plug–ins, Universal Audio have always carried the torch, but now it seems TC have demonstrated their ability to be just as meticulous. Paul White