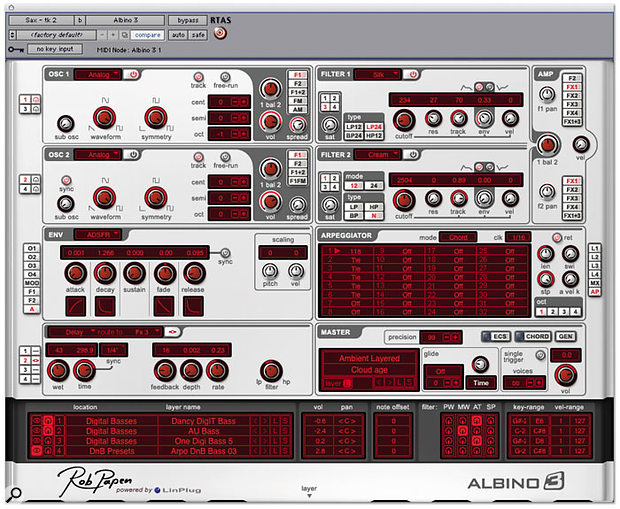 Rob Papen seems to be the kind of guy who is able to program inspirational synth sounds in the way that the rest of us breathe — regularly and without any apparent conscious effort. Even if you haven't heard of this Dutch sound designer by name, you'll have heard his handiwork in soundsets for Access, Alesis, Emu and Waldorf. In 2002, Papen approached Peter Linsener of Linplug with the idea of building a virtual instrument worthy of bearing both their signatures. The result was Albino, a soft synth with four oscillators, two filters, comprehensive modulation routing, and effects. That might sound just like a lot of other 'generic' soft synths on the market, but Albino 's trump card was its 1400 high-quality sounds designed by Papen himself. These presets alone were well worth the cost of the program, and for anyone wanting to try their own hand at sound sculpture, they also showcased the exceptional range of tones and textures that Albino was capable of producing.

Version 2 duly followed, adding a powerful arpeggiator and new digital waveforms, and beefing up the effects. The latest version, Albino 3, carries the flag forward a further stage. Probably the biggest news for existing users is that each preset can be made up of four individual sound layers. This literally quadruples the creative possibilities when programming individual sounds (80 oscillators per note, anyone?). But it also makes up for the fact that Albino is not a multitimbral instrument, so if you want to run several sounds at once you have to run several instances of it. Or rather, attempt to run several instances, as Albino continues to have a large appetite for CPU resources. Linplug reckon that a well-specified Mac or PC digital recording setup should be able to handle about 120 digital or 75 virtual analogue oscillators' worth of sounds. In real terms, on a dual-processor Power Mac G5 running Pro Tools LE, I can't realistically run more than three instances of it.

Other significant Albino 3 changes occur in the filters department, where the previous Silk and Cream varieties are joined by a rather less than polite Scream variation (very tasty when the resonance is cranked up) plus a Comb filter. The effects have been expanded with a wah-wah, a great lo-fi effect, a more flexible reverb and a revised compressor. And Oscillator 1 can now be used as an audio input, so you can use the synth to process external audio. Albino 3 comes complete with 2100 new Rob Papen presets, ranging from out-and-out hardcore trance boneshakers to subtle shimmery arpeggios which fall like digital meteor showers. It's almost impossible not to feel inspired to create new music every time you load one of them up, which is surely the test of any sound designer's mettle.

But Albino isn't just about playing back other people's efforts. Experimentation is made easy by the user-friendly single-screen interface, and the synth's transparent architecture. It's actually quite difficult to come up with something duff even if you don't know what you're doing — which can't be said for all soft synths. Albino 's main strength is its ability to produce sounds and textures that can find a place in all kinds of music, not just the obvious electronica suspects. If you haven't sampled the Albino magic before, you really owe it to yourself to check out the demo. For current owners, it's definitely worth keeping pace with developments by upgrading, particularly at the very reasonable price of 39 Euros. Incidentally, Mr Papen is giving away a few extra presets on his web site, www.robpapen.com. And further commercial presets from Linplug include soundsets from British synth pioneer Ian Boddy and the recently released 'Yemski in Motion', comprising 350 evolving textures and soundscapes designed for film scores and ambient music. Nicholas Rowland

Starplugs sound like something you might buy at an Ann Summers party, but are actually a German software company who use Jeff McLintock's Synth Edit package to create a range of shareware plug-in effects, synths, processors and utilities. They'll even write plug-ins to order, if you have something in mind that isn't already out there.

Admiral is a distortion plug-in that uses what they call 'quadrature overdrive'. I confess to having no idea what that is, but Starplugs say the design makes it especially suitable for situations where you need to bring a vocal to the front of a busy mix, or make drums sound more substantial; with no cabinet modelling or valve emulation, it certainly isn't aimed at guitarists.

The most important control is a single, large Boost knob. This is paired with a button labelled 'Mighty', which, according to the designers, multiplies the boost level a hundred times. A further knob controls the character of the distortion, from Soft at one extreme to Hard at the other, and the distorted signal travels through adjustable high- and low-pass filters. Apart from input and output level controls and some large-ish meters, that's yer lot.

In use, Admiral is what you might call 'quirky'. There are a couple of things about the interface that take some getting used to, most notably the fact that adjusting the cutoff frequency of one of the filters also has an apparently random effect on the other one. Sound-wise, it's not something you'd use on every track, but it is a bit different from the usual fare: not what you'd call pleasant or smooth, but definitely the sort of thing that makes you sit up and take notice. I liked it best on synth bass and electric piano, where it added bite and substance without obscuring the character of the original signal. The 'Mighty' control does indeed launch gigantic waves of crunchiness upon the world, but I wish there was some happy medium between those sounds and the often rather tame results you get otherwise. Sam Inglis

Drumstrip is the first optional plug-in for the SSL Duende DSP platform, and combines a number of sub-modules within a single window, all optimised for processing drum sounds. In addition to the obvious gate, Drumstrip also includes a transient shaper to add attack to percussive sounds, high- and low-frequency enhancers and the famous SSL Listen Mic Compressor, along with very comprehensive metering of both levels and enhancements. 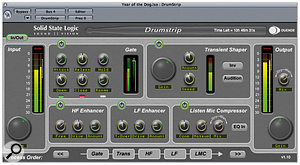 Drumstrip is the first optional plug-in for the SSL Duende DSP platform, and combines a number of sub-modules within a single window, all optimised for processing drum sounds.Drumstrip will only install and run when Duende hardware is present, and the Duende needs to be running v2 firmware, which is available from the SSL web site. The host computer must also be running Duende v2 software or above. As with other Duende plug-ins, VST and RTAS versions are provided for use under Windows XP, while Mac users also get Audio Units support. Drumstrip will take one Duende 'slot' at 44.1/48kHz in mono, the same as existing Duende plug-ins. Version 2 firmware permits all knobs to be adjusted with the mouse wheel, and any plug-in parameter can be automated to the extent supported by the host application.

The input to Drumstrip has gain adjustment over a ±20dB range, and a further control at the output enables the user to mix the dry signal with the combined processing taking place within the plug-in, which can yield some interesting parallel processing effects. Each of the five processing blocks can be switched on and off separately and there's also a global bypass.

Perhaps the most conventional processing section is the gate, which has excellent metering. There are separate thresholds for gate opening and gate closing, with the attenuation range adjustable from 0 to -80dB. Both the attack and release controls are fully adjustable, as is the gate hold time.

The Transient Shaper is a little less conventional, the idea being to emphasise the attack of the notes without changing the decay, so that drum hits can be given more impact. Gain controls the signal feeding the side-chain, and functions in practice as a processing threshold control. A meter shows how much attack is being added by the Amount control, while Speed sets the length of the enhanced transient. An Invert function reverses the phase of the enhanced portion of the signal so that it can actually subtract from the original attack to soften the sound. An Audition button lets you hear only the enhanced part of the signal so you know exactly what is being added — a great help when adjusting the Gain and Amount controls.

To give the sound more high-frequency clarity, there's an HF Enhancer that can be tuned from 2kHz to 20kHz; new harmonics are generated only above the frequency set. Drive controls the amount of harmonic creation, while Amount sets how much of this signal is mixed in with the dry signal. To beef up the low end, an LF Enhancer adds a combination of second and third harmonics to a low-pass-filtered signal, which make the bass end appear stronger. This uses Drive and Amount controls like the HF version.

The Listen Mic Compressor, a digital emulation of the talkback mic compressor in the SSL 4000E, is available free as a conventional plug-in for download from SSL, but the version included here has the option of EQ bypass to provide full-range processing. There's also a new Mix control, so you can experiment with parallel compression. The Listen Mic Compressor features very fast, non-adjustable time constants, which is what gives it such an aggressive sound. In use, it is a 'more' or 'less' box that just does what it does. Process Order allows the user to patch together the five processing sections in any order, and bypassing doesn't upset the latency settings or cause glitching.

I experimented with Drumstrip on some Mix Rescue jobs I was working on, and was impressed by how much flexibility it gives you to shape drum sounds. The gate responds very positively, and having separate attack and release thresholds helps establish positive triggering. For adding attack, the Transient Shaper section works really well, providing you don't overdo the effect, and the same is true of the high- and low-end enhancement, which sometimes lets you get to those parts EQ can't reach. Of course the Listen Mic Compressor is already well known for its wonderfully trashy drum sound, but being able to bypass the fixed EQ of the original makes it more useful, as does the Mix control. It's also nice to know that you can switch around the order of the modules if you need to, so if you want a gated drum sound you could move the gate after the Listen Mic Compressor, for example. If you own a Duende and have to deal with real drums, adding Drumstrip to your arsenal is a no-brainer. Paul White