There are times when you want an all‑singing, all‑dancing plug‑in that can accomplish everything from writing your string parts to putting the studio kettle on. And there are times when what you want is the exact opposite: a plug‑in tailored for one very specific function, with no irrelevant features or unnecessary controls to distract you from the job in hand. KickLab XXL, the first plug‑in from Angular Momentum, belongs firmly in the latter camp. 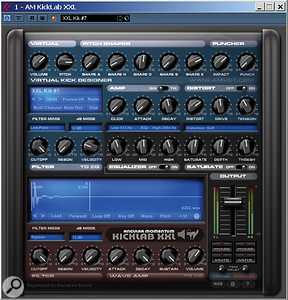 As the name suggests, it's a VST Instrument that is entirely and solely devoted to producing kick‑drum sounds. To this end, it incorporates some of the functionality of a synth and some of the functionality of a sampler, but only as much of either as is needed for the job in hand. Creators Darren Glen and Thomas Weber used a combination of off‑the‑shelf tools such as SynthMaker and hand coding to put it together, and its slickness and professional appearance are a testament to the power of this approach. Currently, it's available only as a Windows VST plug‑in, and is authorised by copying registry entries into its installation folder.

The synthesized and sampled elements of your kick drum enjoy more or less independent signal paths, and either can be muted when you want to fine‑tune the other. The synthesized component begins with either a sine or triangle waveform, which has a dedicated ADS pitch envelope (release time is fixed and the additional 'E' parameter controls the envelope depth). So, for a subby 808‑style kick with an obvious pitch, you'd reduce 'E' to zero and tune the overall pitch to taste, while a fast attack and decay with a high 'E' value will yield a snappy sound with more 'poke'.

Talking of poke, perhaps the most important part of the synth section is the 'puncher'. I'm not sure exactly what its Impact and Punch controls would correspond to in a conventional synth, but they are well named! This is followed by a fairly conventional distortion generator, a multi‑mode filter and a simple AD volume envelope, with an additional Click parameter that introduces, you guessed it, a click at the start of each hit. Filter cutoff can be modulated by MIDI note velocity but, oddly, not by the envelope.

The synth section alone will get you a fair way towards a powerful kick drum sound, but as Angular Momentum acknowledge, purely synthetic kick sounds often lack a certain je ne sais quois unless layered with a sample. With that in mind, they've included a very simple sampler that allows you to manipulate a single drum sample per patch. If you want to use one of your own, you'll probably need to prepare it beforehand, but KickLab does offer simple pitch, reverse, loop, mono and trim functions. It also boasts a filter very similar to that in the synth section, and an ADSR volume envelope. It would be nice if you could see the latter's parameters superimposed on the waveform, but no.

The two elements are brought together in a mixer section with optional Saturation, where each element can have its polarity reversed. The relative timing of each element can, in theory, be adjusted using the Trig Delay control, though I couldn't get these controls to respond to my mouse.

I have one or two other minor niggles, too. Many of the presets are excellent, but they would be a lot more useful if they were given descriptive names rather than simple numbers. I would also have liked the option to route the envelopes to the filter cutoff, and to vary the pitch of the synthesized component from the MIDI keyboard.

Overall, though, I think this is a plug‑in that succeeds admirably in doing what its creators set out to do. It's a flexible, comprehensive, and mostly intuitive instrument that, well, helps you to make kick‑drum sounds. KickLab XXL has a place in almost every sub-genre of dance, electronica and urban music, from techno to hip‑hop. There doesn't seem to be a demo version available, but at this price, few will regret taking the plunge. Sam Inglis

Relatively few Trident A‑Range consoles were built, but many enduring records have been made on them, including David Bowie's Ziggy Stardust and tracks by Queen and Elton John. Malcolm Toft designed and specified the original when working at Trident studios in London, and he's apparently endorsed this plug‑in version, which replicates the EQ section found in a single channel strip, plus the overdrive characteristics of the input stage. Softube's engineers chose to model channel 15 (sonically the best?) from the A‑Range console at Sweet Silence Studio B in Denmark.

The A‑Range channel features four bands of equalisation plus high‑ and low‑pass filters. As with many early analogue equalisers, adjusting one frequency band affects the other bands, but this interaction is all part of their musical charm. Not only does the EQ sport a musical‑sounding set of curves, but it also distorts in a (sometimes) useful way, which has been modelled here.

Each EQ band has four switchable frequency settings as specified on the original design, with the mids covering 250Hz to 2kHz and 3kHz to 9kHz. Both mids have a traditional bell response, while the High and Low sections are shelving, again with four switchable frequencies each, covering 50Hz to 150Hz at the low end and 8kHz to 15kHz at the high end. EQ cut and boost is controlled by horizontal sliders giving a ±15dB range. Three frequency buttons are available for both the high‑ and low‑cut filters at 15kHz, 12kHz and 9kHz, and 25Hz, 50Hz and 100Hz. If you need more aggressive filtering, it is possible to press more than one of these buttons at once, as engineers discovered when working on the original hardware.

The plug‑in visuals follow the original, with a few deviations and additions to meet the needs of the DAW age. For example, there's now variable saturation and adjustable output volume. This means you can adjust the channel distortion independently of input level. If you don't want to use the saturation effect, it can be bypassed by turning it down to the 'Off' position, at some saving on CPU resources. An amber light comes on when the strip is pushed into the distortion zone.

Tonally, the EQ has that forgiving character shared by many vintage designs, where using a lot of it doesn't tend to make the sound excessively honky or harsh, and everything still retains a good sense of focus. There's plenty of range for general tonal shaping, but the lack of a Q control (which I think contributes to those warm, wide curves) also makes it unsuitable for really surgical EQ jobs. I found the EQ worked well on classic rock and pop material where drums and electric guitar feature heavily, and it can also sound pretty sweet on bass. Cranking up the Saturation control reveals a subtle but musical soft‑clipping that works well on snare drums and some types of electric guitar, but as with most such processes, you have to try it yourself to see where it helps and where it makes things worse. The various high‑ and low‑pass filter options are particularly useful, and you'll probably find yourself using those even when you don't need any further EQ. As ever, the engineers at Softube have applied their usual meticulous approach, so if you're a fan of the original Trident EQ, you're sure to like what they've done. Paul White

The three plug‑ins making up the SPL MicroPlugs range are low‑cost spin‑offs from the company's excellent Transient Designer, so if you don't have a Transient Designer already (which can handle pretty much all the tasks these plug‑ins can), you'll find one or more of these extremely useful, especially for polishing up drum, bass and electric guitar recordings. They work in both mono and stereo and, where the host permits, multi‑channel format and, unlike the Transient Designer, don't require an ilok key for authorisation. 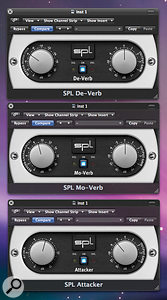 The MicroPlugs Attacker works much like the attack control of the Transient Designer, except that it can only apply positive values to accentuate the attack of a sound, the maximum boost being 15dB. One obvious application is to give drums and percussion more impact, but the treatment also works well to return some definition to over‑distorted guitars or muddy bass parts. If you overdo the treatment on a sound that already has a fairly strong attack, the result can start to sound a touch artificial, but as long as you let your ears make the final decision, it is a great problem‑solver.

De‑Verb is based on the negative half of the Sustain control of a Transient Designer, accelerating the natural release time of the sound being processed. For example, a drum kit recorded in a live room can be dried up with a surprising degree of success: the drums seem better damped, and the room sound just melts away as you turn up the control. The uncanny thing about this plug‑in is that the drum hits being processed don't seem to end up sounding unnatural, even when you're processing a complete drum kit mix that started out with a generous amount of room ambience. This is a great tool for those recording drums in imperfect rooms, as it leaves you free to add a more suitable ambience treatment when mixing. I also got great results using it to dry up some of the sampled kits in ToonTracks' EZ Drummer. The process can be used to clean up messy bass parts, and even some electric guitar parts, too.

Mo‑Verb is, as the name implies, the opposite of De‑Verb, representing the positive half of the Transient Designer's Sustain control. This time the gain comes up as the input signal decays, but in a far more controlled way than, say, a pumping compressor. Drums can be made to ring out significantly longer, and if you want to hear more of the natural room reverb, you can really milk it with this plug‑in. If you go to extremes, you can end up with that huge wash of sound that a pumping compressor creates, which can work really well for some forms of rock music but, as with any process that turns up the gain when the signal level drops, you need to be aware that it can emphasise noise and things like snare rattles too. Used with care, the same plug‑in can add a bit of life and sustain to troublesome acoustic guitars and basses.

If you only need one or two of these plug‑ins, they represent excellent value and, despite their low cost, offer seriously professional results. If you need all three, treat yourself and buy the full Transient Designer. There are few audio processing tools that are as useful or work so effectively. Paul White