No matter how 'in the box' you go, you still need easy, transparent control over your monitoring setup, and this little box claims to do it all for a good price. 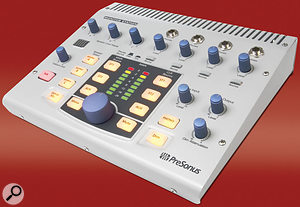 A monitor controller can be the final piece in the studio jigsaw, tying together a mixing desk, computer audio interface, and loudspeakers, providing monitor headphone monitor feeds for performing musicians, enabling you to talk to them remotely, and forming a vital part of the playback chain during mixing, by making it easier to listen through different sets of loudspeakers.

Each and every design has its own unique set of features, but Presonus have managed to cram quite a few into the compact desktop footprint of their new Monitor Station (it's little bigger than the average hardback novel, although its silver and blue livery is rather more hi-tech, and decidedly more robust, courtesy of its 1.5mm steel-plate case).

Based on the popular rackmount Central Station, the Monitor Station is significantly cheaper, yet it still manages to cater for up to three stereo input signals (one of which has a phono preamp option for decks) and three stereo outputs, as well as offering four headphone amplifiers and a built-in talkback mic. This is a lot for your money, so let's examine exactly what you get, how easy it is to use, and how good it sounds.

Despite the generous feature count, there's really nothing very complicated about the Monitor Station — after a couple of minutes studying the controls and a quick flick through the well-written manual, everything made perfect sense, partly due to a well thought-out front panel and careful grouping of the controls.

The three pairs of stereo line-level inputs (ST1 and ST2 on TRS balanced jacks, and Aux on unbalanced phono sockets) can be connected to different outputs on your audio interface or analogue desk to compare different mixes, or used to plumb in a CD or MP3 player to compare them with commercial offerings, while the unbalanced pair offers the very useful option of an RIAA-equalised phono preamp so that you can connect a record deck (do your mixes compare well with vinyl cuts, for instance?)

There's an even more generous complement of outputs, including a main stereo line-level output, which is unaffected by the various output level controls and therefore suitable for connecting an analogue recording device (DAT, Minidisc, or perhaps a stereo input on your audio interface), and a stereo line-level Cue output for headphone monitoring. You'd need to send the latter to a separate headphone amp, though.

The rear panel hosts all the Monitor Station's inputs and outputs — enough for three stereo sources and three sets of stereo speakers, and including an external in for the talkback facility.However, you may not need to use the line-level Cue out, since the Monitor Station already includes a further four headphone outputs, each with its own level control and independent choice of Main/Cue feed. The headphone sockets are on the top of the unit, which is convenient for quick plugging and unplugging. It's a good job the unit is reasonably heavy, since this should prevent it going AWOL when four curly headphone leads are stretching from it in all directions!

Three stereo line-level outs (A, B and C) are provided for connecting different loudspeakers. Each has its own rotary control, so you can balance the playback levels of various different monitors. You could use these in combination for a surround setup; for main, nearfield and 'grotbox' speakers; or, of course, use one output for a switchable subwoofer (although you'd need to set up the crossover in software, or at least before the Monitor Station input).

If you need to speak to performers in your live room you can either use the built-in talkback mic or plug your own (non-phantom powered) mic into the rear-panel XLR input; a front-panel button switches between the two options. There's a red illuminated Talk button to show that the selected mic is 'live', plus a dedicated talkback level control. The action of the Talk button is cleverly thought through: a quick jab will toggle it on, while a longer 'press-and-hold' will let you talk to the performers for as long as you hold down the button but then deactivate the mic as soon as you release it.

Few musicians like wall-wart power supplies, but at least the one supplied with the Monitor Station is a Presonus-badged device that's less likely to get misplaced or accidentally plugged into the wrong unit! Once the unit is powered up there are also plenty of illuminated buttons that display the status of the various inputs and outputs, and after quickly changing the default settings, and powering down and then up again, I was pleased to note that the Monitor Station remembers all its current settings.

The Monitor Station also features various 'Advanced Modes', which are accessed by holding down particular buttons while powering up the unit. Only one mode can be active at a time, but they're fairly versatile nevertheless. There are three Speaker modes: Combo lets you select any combination of speakers in combination (useful for surround work); Toggle is only one at a time (useful for comparing mixes across different speakers); and Toggle A/B lets you switch between A and B outputs but control output C separately (this would be the one for those with subwoofers).

The two Main and Cue Source modes let you either toggle one Main and one Cue source when you want to switch between different mixes, converters and so on, or mix them in any combination. Few monitor controllers offer this mini-mixer option, in my experience, and it's very useful when you want to audition several sources at once.

The final Mode selections relate to the eight-segment peak-reading LED meter displaying Main input level. They let you reference its top 0dBVU setting to +4dBu, +18dBu, or +18dBu output levels, depending on what monitors you're connecting. The manual also provides well-written sections on meter, input, and speaker-level calibration.

I found the Monitor Station very easy to use, because its controls are logically laid out and the various buttons all have a positive action. The input source buttons and meters are grouped around a central black panel also containing the main rotary level control plus Mono and Mute buttons, with speaker and talkback controls to the left. The Aux/Phono, Cue level and Dim controls are to the right, with the three speaker and four headphone output-level controls arranged across the top. 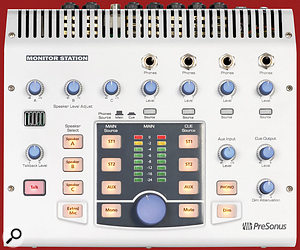 Controls and metering are located on the front panel as, usefully, are the four headphone outputs and a built-in talkback mic.The Dim button is noteworthy for including an associated Attenuation control, which means you can decide how much quieter your dim setting is. The Dim and Mute buttons only affect the A, B, C and headphone outputs, but not the Main rear-panel outputs for your recording device.

I was generally quite impressed with the layout, robustness and ergonomics of the Monitor Station, but had two niggles. First, although all the smaller rotary knobs feel precise and can be set to repeatable positions, courtesy of their calibration markings, the larger, main rotary control feels rather wobbly and has no markings, which slightly lets the side down. Secondly, I was a little concerned that it would be fairly easy to accidentally disturb one of your carefully calibrated speaker levels when you instead meant to change one of the headphone levels alongside. Many monitor controllers provide recessed monitor level controls for this reason, but even something as simple as a different knob colour or size would help guard against mistakes.

Anyone who intends to connect up to three pairs of loudspeakers, three source signals, and up to four pairs of headphones is obviously serious about monitoring — so, however convenient it might be, the last thing you need is for a monitor controller to compromise your audio quality.

The published technical spec is good, the main inputs and outputs having a wide frequency response with ±0.5dB points at 10Hz and 50kHz, very low distortion ( less than 0.0075 percent), and an excellent signal-to-noise ratio of greater than 110dB. I'm pleased to report that the subjective audio quality of signals passed through the Monitor Station is also good, with very low perceived background noise and an extremely clean sound. There's a slight lack of detail and 'veiling' of the sound compared with the direct signal, but these are very subtle differences, and I expect that very few people would grumble, particularly given the bargain price. The headphone outputs also proved to be powerful and clean, and the talkback mic sounds fine — so, all in all, this is a serious little unit!

The Presonus Monitor Station packs a lot of features into its diminutive package. It sounds pretty transparent, and I like its rugged yet hi-tech design and the versatility of its Advanced Modes. In short, I've no doubt that it will prove an excellent nerve centre for many small to mid-sized studios.

If you have more modest requirements but still need talkback features, several monitor controllers, including the much cheaper Behringer Minimon Mon800 and Samson C-control, offer a subset of the Monitor Station features, although they're unlikely to match its audio quality.

The most obvious competitor for the Monitor Station is Mackie's Big Knob, which retails at a very similar price and has a fairly similar feature set. It only offers two headphone outputs to the Monitor Station's four, but it has four switched inputs instead of three, a footswitch option for its talkback, and a bigger knob. Which is better will depend on how far the spec matches your individual requirements. Those who demand total audio transparency should probably also investigate the Presonus Central Station, which has a similar feature set with a passive signal path, but most other serious monitor controllers are considerably more expensive.

With three stereo inputs and outputs, a phono preamp, built-in talkback mic and an impressive four headphone outs, the Presonus Monitor Station packs in a lot of features for the price, yet has a minimal effect on incoming audio quality.