Paul White looks at a new voice channel which packs a lot of features into a small space.

Even though virtual studios could be said to be gradually undermining the case for using traditional hardware, the one piece of hardware which is unlikely ever to lose its value to the studio musician is the dedicated recording channel, so it's not difficult to see why so many manufacturers have already added a unit of this type to their range. The outcome, of course, is that there are now lots of 'voice channels' to choose from, ranging from inexpensive units from Joemeek and Behringer to high‑end models from the likes of Focusrite and Millenia Media. Into the middle price‑bracket of this crowded marketplace comes the new PreSonus VXP reviewed here.

Very elegantly presented, with a sculpted blue anodized front panel, the all‑solid‑state 1U VXP uses a transformer‑coupled, Class A mic preamp design, which is followed by a compressor, an expander, a de‑esser, a four‑band equaliser and a separate peak limiter — an onboard A‑D converter on a plug‑in card is available as an optional extra.

The rear panel setup is fairly straightforward with a balanced XLR mic input, a balanced line‑level insert point (on a pair of TRS jacks) that also doubles as a line input and a choice of XLR or jack balanced analogue outputs. Unfortunately, there's no instrument input option, which would have made the VXP a more flexible all‑rounder. A blanking plate covers the slot for the optional 24‑bit/96kHz A‑D converter, though this was not supplied for review. Power is via standard IEC mains connector feeding an internal toroidal transformer.

Cramming In The Controls

The rear panel of the Presonus VXP carries all the audio and power connections and also a blanking panel for fitting an optional A‑D converter board.

In order to squeeze all the available functions into the 1U front panel, the controls on the individual sections have been kept as simple as possible, and a number of dual‑concentric pots have been used. The mic input stage has just two rotary controls, plus switches for a 20dB pad and 48V phantom power — these, like all of the switches on the VXP, illuminate to provide clear visual feedback of their status. One of the rotary controls adds up to 60dB of input gain and the circuitry provides 24dB of headroom, allowing it to handle signals at up to line level if necessary. An eight‑stage LED input meter shows the mic preamp's output signal level. The discrete Class A buffer amplifier is followed by dual gain stages that feature a capacitor‑less design. One unusual feature is the IDSS control, which adjusts the biasing of the FET used in the mic preamp, in order to control the amount of even‑harmonic distortion — an emulation of tube warmth.

The VXP's compressor shares some of the philosophy of PreSonus' own Blue Max (which I reviewed back in SOS Aug 1997) in that it offers 16 presets via a rotary switch. Apparently, a number of experienced professional engineers were engaged to help with designing these presets, which are optimised for vocal use. These are grouped according to severity — Light, Medium and Heavy. The compressor's In and Out levels are then the only remaining controls, the former adjusting the amount of compression and the latter acting as make‑up gain — there's no ratio, attack or release to adjust. A bypass button takes the compressor out of circuit when not required, and a dedicated eight‑section LED meter monitors the compressor's gain reduction.

The expander and de‑esser are allocated one dual‑concentric control each. The expander offers Threshold and Ratio control, but no time‑constant adjustment, and is bypassed by winding the Threshold control fully anticlockwise. A four‑section LED meter shows how much gain reduction is being applied.

The de‑esser seems to attenuate only high frequencies, so as to disturb the low end and mid‑range as little as possible. You can set its Threshold and Frequency, the latter between 800Hz and 8kHz, and cranking the Threshold control fully clockwise once again bypasses the process. Though there are more elegant methods of de‑essing, such as that on the SPL Channel One (see my review in SOS November 2000), the VXP's system is still far better than using a compressor with an equaliser patched into its side chain. Again a four‑section LED meter monitors the de‑essing action.

The equaliser is one section where the controls haven't been radically simplified, though the two mid‑sections have switchable Q settings rather than being fully adjustable. The high and low shelving filters have a range of ±12dB at 12kHz and 100Hz respectively, while the two mid‑bands are adjustable from 90Hz to 700Hz and from 450Hz to 5.8kHz respectively. A switchable low‑cut filter, operating at 80Hz, and an EQ bypass button are also provided.

That leaves the Peak Limit control, for setting the limiter's threshold, and the output Level control in the Master section. The limiter can be set to work at up to around +23dB, in order to accommodate all the level‑hungry soundcards and digital recorders out there, while the output level control can add another 10dB of gain if it is needed. An eight‑section LED meter monitors the output level and a big red button turns the unit on. 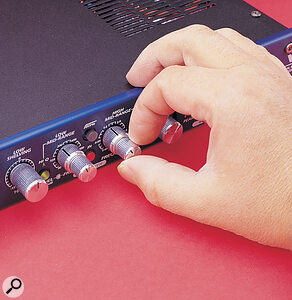 The Presonus VXP makes use of dual‑concentric controls in order to fit all its facilities in the available panel space.

Though the VXP is very ergonomically set out, I found the dual‑concentric controls a little awkward to use, because the outer rings are set quite a long way back. The illuminated switches are both positive in action and very visible, and the panel screening is also large and clear without looking clumsy. The machined aluminium knobs have a smooth action with centre detents where needed, and the provision of separate metering for the various sections is a great aid to setting up.

How better to try the unit than to conduct a vocal overdub session with it? First impressions were that the mic preamp was very clean and detailed while the medium compressor settings seemed well‑suited to compressing while recording. Used in this way, the compressor imposes very little character on the sound and instead looks after the overall signal level, leaving you with enough leeway to add more compression while mixing if you need to. Increasing the IDSS control causes a very subtle thickening of the sound, but nothing too artificial or radical. Like the compressor, the expander is smooth and forgiving, though the de‑esser can introduce noticeable high‑frequency ducking unless you use it sparingly.

The EQ section has plenty of range and works fine providing you don't try to push it too far. It's more workmanlike than esoteric and can tend towards harshness in the higher registers when pushed, but for all normal applications it'll get the job done. Having said that, I can't help feeling that the designers have put the wrong functions on the inner section of the concentric pots — once you've set the frequency, it would make sense to adjust the level with the more easily accessible inner knob, but in this case the EQ level is on the outer ring. It's the same with the expander and de‑esser, where the critical Threshold control is on the less‑accessible outer ring.

When setting the output level, the limiter comes after the output gain control, which is as it should be. However, there doesn't seem to be a limit LED to let you know when this is working. I'd assumed the top red LED on the output meter would indicate limiting, but I couldn't get it to come on, even when limiting was clearly audible. Normally you'd set the limiter to come on just before the device you're feeding is about to clip, but without a warning LED you need to feed an over‑level signal through the system and then adjust the limiter until the meters on the receiving device show that the signal peaks are being held just below clipping. Other than that, the limiter works fine and sounds quite benign, providing you only use it to police occasional clips. If you deliberately force the signal hard into limiting, the limiter action is clearly audible.

The VXP is stylish, easy to use and sounds good, though I think it's probably fair to say that its mic preamp and compressor are its strongest attributes. Having a Class A, transformer‑coupled mic preamp is quite a luxury, and the compressor manages the signal dynamics very effectively without the signal sounding processed. I also like the degree of control offered, which on the whole gets the job done without leaving you frustrated by the lack of parameters. However, as mentioned earlier, I didn't find the dual‑concentric knobs particularly easy to use. The comprehensive metering is a definite plus, other than the lack of a peak limiter indicator LED.

This is a tough market sector with lots of good products out there vying for your money, but the high‑quality mic preamp, smooth compressor and simple operation of the VXP make it well worth checking out.

Though the optional DDG24/96 board wasn't available for review, PreSonus tell us that it will offer stereo A‑D conversion at a choice of resolutions from 16‑bit/44.1kHz all the way up to 24‑bit/96kHz. The second channel is accessed through an extra input jack, with digital output from both channels being output in either coaxial S/PDIF or AES‑EBU formats. In addition, word clock input and output sockets are also provided, allowing the VXP to be connected to a central digital clock source in professional installations.information VXP voice channel, £816.63; DDG24/96 converter board, £464.13. Prices including VAT.

The VXP is a well‑thought‑out voice channel with the bonus of a Class A, transformer‑coupled mic preamp.