Process Audio is the brainchild of Fab Dupont, a mix engineer who's also a highly regarded educator and has written for SOS in the past. Their first product is a plug-in called Sugar, available for Mac OS and Windows, in all the usual native formats and authorised using the iLok system. Described by Fab as an attempt to "bridge the gap between classic analogue sound and digital reality", it's a sort of one-stop audio sweetening shop that offers multiple flavours of harmonic excitement. 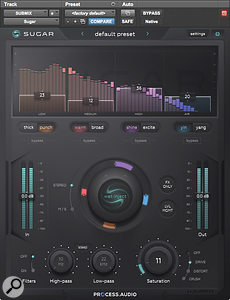 Sugar prioritises ease of use over endless flexibility, so although there's clearly some complex stuff going on behind the scenes it's simplicity itself to use. Incoming audio is divided into four frequency bands, with no user control over the split points. The individual controls for each band consist only of a choice of two processing algorithms and a level slider. These are used to specify the type and degree of enhancement taking place in each band, after which a global control labelled 'wet inject' lets you balance the total contribution of all four bands against the dry signal.

The multiband section is followed by linear-phase low- and high-pass filters, with switchable steep and not-steep slopes, and a wide-band saturator that can be set to Drive, Distort or Crush your audio.

With no technical explanation forthcoming about what most of the harmonic enhancement processes do, Sugar is an appropriately 'suck it and see' sort of a processor. And, for the most part, it's one that delivers gratifying results very quickly. The most obvious application is on the master bus; like many people I'll usually have one or more plug-ins in my mix-bus chain that are adding saturation, coloration and treble boost, and Sugar can do all of these things with aplomb. In most cases, in fact, I found that I could add moderate amounts of Sugar to an existing plug-in chain without taking things over the top. I was particularly taken by the ability of the upper-mid band in its Shine mode to make mixes seem present and clear without being harsh, while dialling in a bit of Punch on the low end was just the thing for those tracks where the drummer hits like a limp kipper or the bassist seems incapable of producing any actual bass from his or her instrument.

Sugar is an appropriately 'suck it and see' sort of a processor. And, for the most part, it's one that delivers gratifying results very quickly.

Whilst I'm not generally a fan of all-in-one magic-button plug-ins that promise to make your mixes sound better without helping you to find out what was wrong with them in the first place, I'll cheerfully admit that Sugar did indeed improve mixes I thought were already pretty good; and even if you don't know exactly what it's adding, or in what quantity, you do at least get an idea of which parts of your frequency spectrum are lacking in sweetness. It's very easy to overdo things, and I never found myself pushing the amount sliders beyond 20 or 30 percent, but used in moderation, this is one ingredient that can definitely make your mixes taste better.