Have QSC struck the perfect balance between sound, portability and price?

QSC have a reputation for producing effective PA equipment for musicians at sensible prices, occupying the middle ground between more affordable but less refined systems, and high-end esoterica. This new K.2 series of active speakers, which are certainly attractively priced, would appear to offer plenty of clean power and include overall four-band EQ plus basic mixing for stand-alone applications. Other user-adjustable parameters include high-pass filtering for use with a sub, and delay for use in multi-speaker installations. Also important to mention is that once you register the product, your warranty is extended to six years. The K.2 speakers are available in eight-, 10- and 12-inch versions; the 12-inch K12.2 is reviewed here.

Housed in an asymmetrical ABS enclosure with a smooth satin finish, the K12.2 can also double as a floor monitor. A perforated steel grille protects its 12-inch driver and horn-loaded titanium-dome 1.4-inch compression driver. The horn shape produces what QSC call DMT or Directivity Matched Transition, which aims to provide a consistent sound balance across the listening area by controlling the dispersion of the mids and highs; this model has a specified 75-degree ‘Axisymetric’ dispersion characteristic. Power comes from a pair of Class-D amplifiers rated at 1800W for the lows and 225W for the highs (peak). Cooling is via a variable-speed fan designed for quiet operation. It must be quiet as I didn’t even notice it at first!

For portable use, the speakers are fitted with top and side aluminium carrying handles, non-slip feet and a standard pole-mount offering the choice of two sockets, one forward-facing and one with a 7.5-degree downward-tilt. For installations the cabinets have two M10 threaded points, M5 yoke attachment points and a pull-back ring. Blanking plugs hide the mounting points unless they are needed. A V-Lock-compatible IEC power socket latches to the included power cord and a switch-mode power supply can accept 100 to 240 Volts, 50-60 Hz supplies. With a weight of 18.6kg, carrying the speaker one-handed is not out of the question.

What really matters of course is how much clean SPL you can expect from the speakers and in this case the numbers are 132dB peak at one metre, or 126dB continuous. Used on their own, the speakers cover a 50Hz-20kHz (-6dB) frequency range, or they may be teamed with a sub provide to a more powerful full-range system. A front-panel LED shows the speakers are powered up. 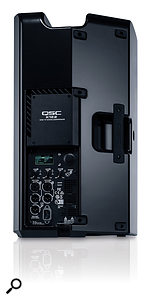 The K12.2 features a built-in three-channel mixer, which can accommodate mic, line and instrument inputs.While most working bands will probably run the speakers from a separate mixer, the K12.2 does have basic on-board mixing facilities comprising two XLR/jack ‘combi’ connectors for inputs A and B and a stereo 3.5mm TRS jack (summed to mono) for input C. Channel A can be switched between mic and line sensitivity while channel B can be switched between line and high-Z for use with instruments (the instrument option also adds more gain). A mix output is provided on a balanced XLR reflecting the balance set using the individual channel level controls but doesn’t include any DSP processing. All three channels have gain controls, and channels A and B also have direct ‘thru’ outputs on XLRs. As with many current speaker designs, DSP is used to handle the crossover, high-pass sub filtering, EQ, delay and protection duties.

In addition to the input and output connectors, the recessed rear panel houses an LCD screen plus a data wheel and two buttons, which allow access to the mixer input selection, four-band EQ, sub settings, delay and memory save and recall for setups (which QSC call Scenes). Detented level controls are fitted for the three mixer channels, and LEDs help show the user what is going on, including signal presence, mic/line selection, line/instrument choice and limiter status.

The menu system is so easy to use that you don’t really need to look at the handbook to operate the speaker. I chose the flat EQ setting and first played some pre-recorded music through the speaker, which revealed a tighter than expected bass end, good vocal clarity and crisp highs. As with most live-sound speakers, the highs are a little more ‘forward’ sounding than you’d expect from a studio monitor or hi-fi speaker, but that can help in a live situation when the audience is some distance away. The four-band EQ can be used should you wish to tailor your own response — which can be saved as part of a Scene.

While the mixer is very basic, it does what is asked of it, and the input configuration can accommodate, for example, a singing guitar or keyboard player using backing tracks. There’s plenty of clean volume on hand too, so the low end will do justice to a backing track as long as you don’t require a huge level of bass.

Tested at a pub gig, the speakers were more than capable of delivering the level and clarity needed, but it is also worth pointing out that, unlike some plastic-box speakers, you don’t hear too much in the way of distracting boxy low mids when you’re standing behind them. They are also light enough to lift onto poles without help and not too tall to stand upright in a typical hatchback car.

In short then, these are very capable active speakers, and they are also sensibly priced as well as being practical for transport and setup.

Other plastic-enclosure speakers in this price range are available from Mackie, Alto, LD Systems and JBL, among others.

This is very much a ‘does what it says on the box’ speaker that stands up well in comparison with similarly priced competition.