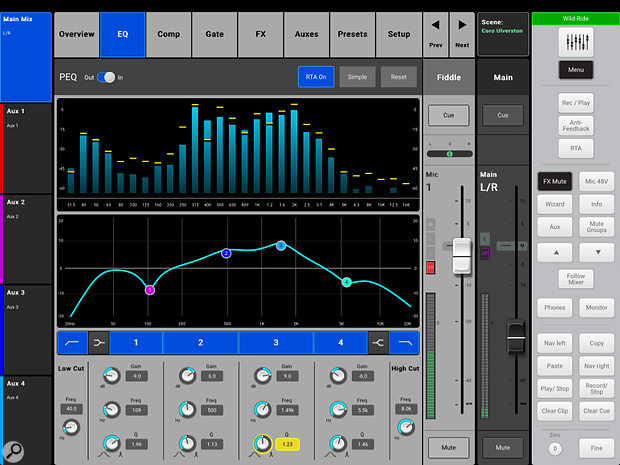 The new real-time analyser can be inserted on any input or output channel.

The latest firmware for QSC’s popular TouchMix-8 and -16 mixers endows them with a huge amount of extra functionality.

QSC’s release on June 6th this year of v3.0 of the TouchMix-8/16 firmware brought the TouchMix-30’s functionality to its smaller stablemates, together with the corresponding update of the TouchMix iOS/Android remote control app. As a TouchMix user, I had been eagerly awaiting the arrival of this upgrade and, at the first opportunity, I began the process of updating my TouchMix-8’s firmware, which turned out to be a simple, painless procedure that is well documented on the QSC web site. Updating in the future has now become even easier as, under the new v3.0 firmware, a TouchMix that is connected to a router with Internet access will check for an update and download it directly or to a USB drive connected to it.

The most obvious change to arrive with v3.0 firmware is the introduction of the screens and graphics from the TouchMix-30, for both the TouchMix-8/16 itself and their iPad/Android remote control apps. The new screens are a big improvement in terms of style over the originals, although some of the older operators amongst us whose visual acuity is deteriorating with age may find a visit to the optician to be an essential adjunct to these updates. 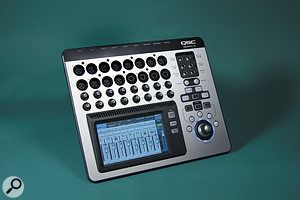 QSC TouchMix 16.Although the TouchMix’s new screens work perfectly, I twice fell foul of a known minor issue around missing information on a setup screen. On one occasion, the Aux Pick-Off point selectors and the Main L-R routing button in the Aux Setup screen disappeared. As per the v3.0 release notes, touching the Prev and then the Next navigation buttons restored normality. On another occasion, the digital gain control disappeared from all input channel overviews and only by resetting the individual channels and reloading their presets could I bring it back. On both occasions, the remote control app on my iPad faithfully reflected the loss on the TouchMix’s screen.

These have been the only occasions that I’ve experienced this issue, so I would support QSC’s belief that this issue is fairly rare. Two other known issues affect only the TouchMix-16, the first of which is that DCA control of aux 9-10’s output level is inoperative. The other is that the first release of the updated v3.0 app for iOS and Android erroneously allows the Room Tuning wizard to be run on auxes 7-8 and 9-10. Running this wizard on those auxes crashes the app as there is no graphic EQ on those outputs. An imminent maintenance release (due in August 2017) will fix these and other issues.

With the new graphics comes the TouchMix-30’s vertical row of on-screen mix select buttons that give you instant access to the fader views of the Main and the Aux mixes (four mono on the TouchMix-8 and six mono plus two stereo on the TouchMix-16), a view that is determined by the block selected in the fader navigation strip. You can get slightly confused here because if you’re looking at the Aux Master faders on the Main Mix screen and then select an Aux view, you’ll see a screen of blank panels until you select another fader bank. There’s a similar confusion if you’ve got the DCA fader view selected when you switch to an Aux view; you’ll see the DCA faders even although there’s no feed to the aux sends from the DCAs.

One of the major additions in v3.0 is the single-instance Real Time Analyser (RTA) that can be activated on any input or output channel. Although it can only be used on one device (mixer or iPad) at a time, the RTA can be an invaluable aid when setting up EQ on inputs and outputs, checking for likely feedback frequencies or tuning a room. Speaking of feedback prevention and room tuning, TouchMix v3.0 has not only increased the number of anti-feedback filters on all outputs to eight, but also now contains wizards to assist you both in avoiding feedback and in tuning your PA system to the room that you’re working in. 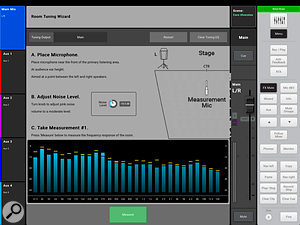 If you have a measurement (or other flat response) microphone, you can use the Room Tuning Wizard on any of the main or mono aux outputs to optimise the graphic EQ settings and achieve an even response at up to four measurement locations.The Room Tuning Wizard is another major addition that runs on the main and mono aux outputs. Operating it is easy as on-screen instructions walk you through each of its three precision levels (low, medium and high). All you need is a long XLR lead and a measurement or other flat-response microphone on a stand. Depending on the level selected, you spend a couple or more minutes per output taking measurements in either one, two or four room positions as directed by the wizard, and the job is done. As with other auto room-tuning systems, the tuning is carried out by automatically adjusting the 32-band graphic EQ that is present on all the tunable outputs. Once the TouchMix has finished, you can manually fine-tune the result should you need to. On the output EQ front, v3.0 also upgrades the parametric equalisers on every output from four-band to six-band, giving you a wider range of tonal options in the process. 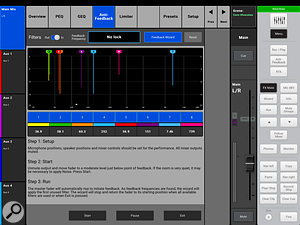 The Anti-Feedback Wizard automatically raises your chosen output until feedback begins, and then applies up to eight notch filters to keep it under control. The filters can then be adjusted manually if necessary.The Anti-Feedback Wizard also runs on the main and mono aux outputs and has a similar, screen-driven simplicity of operation. Once you’ve got your system performance ready, activating the wizard automatically raises the level of the selected output’s master fader until a feedback threshold is detected and a filter is activated at the offending frequency. The wizard continues to run until all eight frequencies have been allocated or you press Exit. Usefully, you can not only fine-tune the amount of cut of each filter band, but also vary the overall depth and Q of the filters on each individual output, allowing you to minimise any overall negative effect of the active filters.

Another great new feature is the ‘Tablet Follows Mixer’ mode, which is activated from within the remote control app. In this mode, touching any input or output channel fader on your TouchMix’s touchscreen opens up that fader’s channel screen on your iPad or Android tablet, giving you one-button access to all that channel’s facilities. This feature really does speed up your workflow on the mixer and, for me personally, is probably the most important of all the new features in practical terms.

As TouchMix-8/16 users will be aware, Scenes (snapshots of the entire mixer) and Presets (channel settings snapshots) are central to speedy setup and operation of these mixers. In v3.0 the new Channel Safe and the upgraded Omit Levels functions add significant flexibility to the use of both. When the Channel Safe function is engaged, that channel’s setting will not be changed when a scene is recalled, so that you can, for example, temporarily change a vocal channel EQ to cope with a stand-in singer for a night and recall your band’s normal ‘per-song’ scenes without having to manually change the singer’s EQ on each recall. When your usual singer returns, you simply disengage Channel Safe mode and his or her own EQ settings will be restored with the next scene recall.

The Omit Level function, which in v2.0 allowed you to leave a channel’s volume level unchanged when recalling a preset, has been upgraded to also omit group assignments, so that a preset can be recalled whilst leaving not only its level, but also its mute group, subgroup and DCA group assignments unchanged.

One of the criticisms commonly levelled at the TouchMix-8/16 is their use of analogue input gain controls that precluded having a recallable input gain. In v3.0, the range of the individual channels’ digital gain control has been expanded to ±15dB so, with a bit of forethought, you can set up very usable recallable input gains if you need them. Version 3.0 also adds the facility to delay the signal in any or all input channels by up to 100ms.

On the effects front, the v3.0 update adds a balance control to the effects returns to monitors and also gives you the ability to use tap tempo to set effects delay times from either the mixer or a tablet. I found it marginally easier to set a tempo by tapping the screen on my iPad rather than (as was required) by pressing the main control knob on my TouchMix-8.

A very useful addition to the smaller TouchMixes is the TouchMix-30’s Copy & Paste function, which allows you copy the entire settings for one channel or its aux mix, compressor or EQ setups and paste those to another channel — another boost to an already speedy setup workflow. By default, the TouchMix-8/16’s user keys U2 and U3 are set up to copy and paste respectively, but you could use a pair of the additional four on-screen user keys that v3.0 brings to your tablet instead, and set the onboard hardware keys to other operational functions.

Another useful change affects the aux 7-8 and aux 9-10 unbalanced stereo TRS outputs on the TouchMix-16. The new firmware gives you the option of configuring these as mono, balanced line-level outputs, expanding their flexibility by, for example, allowing you to feed another two floor monitors.

To complete the list of new facilities, v3.0 adds a USB drive format utility so that you don’t have to have access to a computer when a drive needs formatting, and also adds an MP3 file player so that you can play backing tracks or interval music, for example, from an attached USB drive.

Underneath their compact exteriors QSC’s TouchMix-8 and TouchMix-16 are, in reality, superbly equipped and extremely capable digital consoles. The v2.0 firmware, which I have been running since I purchased my own TouchMix-8, coped with everything that I threw at it without any issues. This first release of v3 has simply made operating the TouchMix a more streamlined and elegant operation. In addition to the direct access buttons for the various mixes, I found the new RTA and the Room Tuning Wizard to be particularly useful in getting my PA up and running in the minimum amount of time, and the new Tablet Follows Mixer mode really does speed up configuration of the TouchMix itself. The other new features and facilities are all very welcome additions to the TouchMix’s already extensive flexibility

If you own a TouchMix-8 or 16 (and despite the few small bugs and issues that will probably have been cleared up by the time that you read this review) this v3.0 firmware is an essential download. I’m loving it!