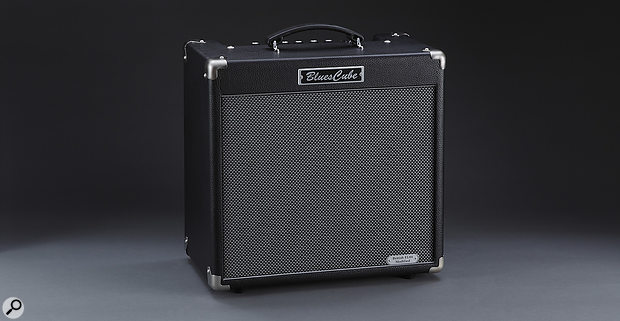 This Vox-inspired special edition of Roland’s analogue modelling amp is equally impressive at home, on stage or in the studio.

I was so taken by the sound of the Roland Blues Cube Stage I reviewed a while ago that I bought one for small gigs. Happily, I found that it worked very nicely for recording too. Unlike valve amps, a well-designed modelling amp can perform equally well at any sound level, and that’s a big deal if you have to be careful about the amount of noise you make when recording. However, the importance of the analogue input stage that precedes digital conversion is often understated, and Roland’s engineers have got this right — the amp feels very natural and also ‘takes pedals’ extremely well.

Rather than offer lots of amp models and effects, the Blues Cube’s Tube Logic algorithm is based around one very detailed amp model, and the effect section provides only reverb or, in the case of the Artist models, reverb and tremolo. It’s possible to change the amp character of the Stage, Artist and Tour models by plugging in optional tone capsules (essentially a new algorithm), one of which (New York Blues) leans strongly towards an EL84 Class-A tonality. The larger amps in the series have two channels, nominally cleanish and drive, though I always use mine on the cleaner channel set just before breakup and then add a pedal for additional overdrive. It’s also worth mentioning that these amps use a traditional class-A/B power amp rather than Class D; I think that contributes towards their ‘organic’ feel.

A later addition to the Blues Cube range was the compact Blues Cube Hot, a single-channel, 30W 1x12 combo with reverb, and with enough drive-level range to go from clean to classic rock. These ‘Hot’ models have no Tone Capsule socket, so the first model to come out had the basic Blues Cube tone (which sounds quite Fender-like, with Bassman leanings).

The special edition version under review here is voiced to sound like a British EL84-powered Class-A amp. While the tonality is clearly influenced by the Vox AC30 Top Boost model there’s more drive available here. Class-A power stages overdrive in a less symmetrical way than push-pull output stages, and this contributes to the jangly highs associated with the AC30 Top Boost. 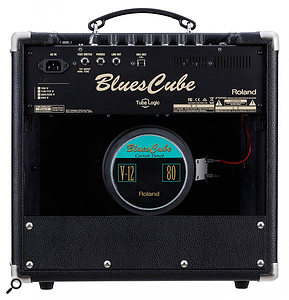 On the rear, as well as headphones and line outputs (both with speaker emulation), there is a USB port for audio interfacing.Physically the new 80W Roland amp could be mistaken for a small valve combo. The 12-inch speaker is mounted in an open-backed ply cabinet that’s finished in black vinyl with metal corner protectors. The control panel looks very conventional too, with no programs, displays or presets; there are just the familiar controls you might find on any amp, namely preamp volume, three-band EQ, master volume and reverb. A Tone button also adds some extra top, and a Boost button offers more drive, and both can also be controlled via an optional dual footswitch. One other control, that’s particularly useful in the studio, is the four-way Power Control (0.5, 5, and 15 Watts, and Max) rotary switch. The Tube Logic algorithm replicates details such as output valve distortion and power-supply sag, and this power switch enables these characteristics to be recreated regardless of the power setting you choose.

In a home-studio setting, that half-Watt setting can be a really practical option, but if DI’ing is more appropriate, there’s both an analogue line-out and a USB audio output for recording to a computer, and for the latter both Mac OS and Windows drivers can be downloaded from Roland’s web site. Both outputs incorporate speaker-emulation and these emulated outputs sound pretty authentic, but for maximum flexibility I still prefer to mic up the amp — that way you have control over mic choice and positioning, which you don’t with the emulations.

Used on its own, the amp has a definite EL84 character that ranges from vibrant clean tones, via on-the-edge blues right up to the more polite reaches of classic rock, all imbued with that subtle jangle. If you favour a humbucker-equipped guitar then you can get more drive, but even single-coil pickups can push the amp into rock territory. If you play a Strat, you’ll find the amp voicing really brings out that classic ‘Stratiness’, with a lovely shimmer that’s not a million miles from the cleaner side of Jimi Hendrix — even though he didn’t use Vox amps. Patch in a good drive pedal and you can take the overdrive sound wherever you like. Unlike some modelling amps, Roland’s Tube Logic technology makes these amps very touch-sensitive, just as you’d expect from a real valve amp, and when you push the amp into breaking up the result sounds very natural and organic. The noise floor is also lower than you’d expect from an equivalent valve amp. 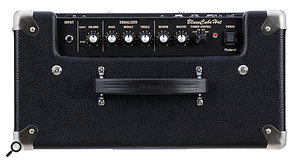 Most controls will be familiar to anyone who’s used a tube amp, but the Power settings, which emulate characteristics such as power-supply sag, might be of particular interest to recording guitarists.Though this amp is physically small, and much lighter than a valve amp of comparable power, it still feels very substantial and is capable of being extremely loud. It coped with a small trio gig just fine, with no need to get close to maximum volume. I used my own Blues Cube (miked up) at a couple of festivals recently, and found the 15W setting with the Master volume turned up only half way was perfectly loud enough to hear on stage; this model has similar attributes. In the studio, the low background noise, the ‘play nicely with pedals’ capability and ability to produce big sounds at a modest volume are all real positives.

There are a couple of features lacking, which might have been nice to see, though in practice they’re unlikely to trouble many people. There’s no effects loop, for instance, and as far as I could tell it’s not possible to turn off the speaker emulation for the line, headphones and USB outputs. There’s also no reverb footswitch. The Line output jack doesn’t mute the speaker, which could have been a useful option in some recording scenarios, though the current configuration is useful for recording DI’ing into a PA system.

Roland’s Blues Cube amps are not particularly cheap — less money might buy you a small valve combo — but they’re good. They offer tonal consistency (there are no valves to deteriorate) and the ability to deliver ’sweet spot’ tonality at any volume level. This EL84-voiced version won’t do modern metal without pedal assistance, but if you’re after classic guitar tones it’s a lovely little amp! It’s great for clean-but-not-clinical sounds, smoky blues tones and, when pushed, authentic ’70s rock. Add your own pedalboard, and you’re good for any style. If you’re deeply suspicious of tubeless amps, try one — it should challenge your preconceptions.

There are many modelling amps around these days with Line 6, Vox and Blackstar all producing amps that merit closer inspection. Most offer more tonal variety than the Blues Cube, but much of the Roland’s appeal lies in its ability to do one job particularly well.

This is one of the few modelling amplifiers that I’d be happy to use in place of a small valve combo. It is a perfect fit for pub gigs and studio sessions.