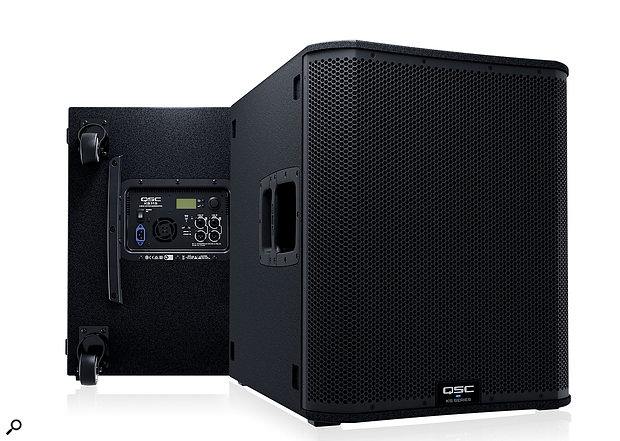 Cardioid subwoofer arrays were once the preserve of big-budget events and festivals, but QSC are making directional bass a realistic prospect for the masses.

My coldest gig of the year was fast approaching, and I was wondering which rig to assemble for an all-day, multiple-performer public event culminating in the switching on of the town's Christmas lights. This event is one I've been doing for many years, and it has always presented its own set of particular challenges including moving around several locations in the town, widely varying stage sizes and layouts, and an interesting variety of performers ranging from junior school choirs with backing tracks to professional party bands and celebrity guests. Two things have, however, remained fairly constant, namely the climatic conditions (cold and/or wet) and the mix position (anywhere except front–of–house). The choice of PA depends mostly on the exact venue and the target audience area, and this year's event was in the market square, a nice flat paved area, normally used for parking and surrounded by buildings. A fairly substantial stage had been hired in and the audience space was roughly 50 metres square. The programme would be a mix of community groups and a couple of bands later on, and the weather was looking dry but very cold. My mix position (as I knew from the previous year) would have to be at the side of the stage, directly behind the stage right speaker stack.

I say all this because at the previous event I was discussing the possibilities of — and bemoaning the lack of — directional subwoofers, because I'd spent the whole gig immersed in low frequencies and having to make frequent use of my noise-cancelling headphones. The message from the SOS office that I was about to take delivery of a set of QSC KS118 subs was therefore more than welcome, and although the demo units would only be with me for a few days, the timing was spot-on.

The original plan was to try out a pair of KS118 subs and I was told that a pair of full-range speakers would also be provided; I straight away asked if I could have four subs so that I would be able to place them either side of the stage (centre placement not really being feasible at this location) and make use of the directional facility. QSC's distributors got back to me and said yes, they would supply a set of four subs and two K12.2 top cabs (reviewed in SOS October 2017: https://sosm.ag/qsc-k122), and the whole lot duly arrived on two pallets together with sets of transit and operational covers, and a set of distance poles. It took more time to break down the pallets and unbox the speakers than it did to set them up in the studio for a confidence and setup check, and with very limited time available I was happy with how very quick and easy to set up these K-series speakers were, in whatever configuration. As I was planning to use the subs in cardioid mode I set up that way indoors just to make sure that everything worked, and also to save a bit of setup time on site (it being so cold!), although when using multiple subwoofers in a directional array there will be specific settings for individual boxes, depending on where they are in said array.

The thing about low audio frequencies is that they are generally omnidirectional, and the lower the frequency the more this is likely to be the case. Using subs in a directional array employs interference techniques, where the output from one (or more) speakers is used to interfere with the output from the other (or others) such that the overall output from the subs is substantially greater on the audience side than towards the stage. This is a very simple way of describing some pretty complicated acoustic theory, but it's essentially the part that matters to us, the users. It's more complicated than just reversing the polarity of one sub and facing it the other way, although that would in itself yield some sort of directional result; suffice it to say that the guys at QSC have sorted all the complicated stuff and provided us with a simple menu setting, where two or more subs can be configured to operate in cardioid mode, and the various detailed settings and optimisations have all been made so that we don't have to worry about them.

QSC's new KS118 builds on the well-established reputation and success of its predecessor, the KW181, and brings an uprated power amp section, new driver and enhanced DSP. The 18–inch long-excursion driver has a four-inch–diameter voice coil and is mounted in a direct–radiating ported enclosure. The power amp is a dual, bridged Class–D design capable of delivering 3600W (peak) total power, (ie. 1800W per module). Maximum SPL is given as 136dB at 1 metre and the frequency response is -6dB at 41Hz and 98Hz. The active module is cooled by a variable-speed fan under DSP control, and audio access is via two XLR connectors with direct pass-through output links. The included IEC power socket accepts and mates properly with locking connectors, although the sub will work perfectly happily with a standard IEC 'kettle lead'.

The cabinet is made from 18mm birch ply, finished in a tough black coating, and the punched–steel face grille is finished in a black powder coat and has an attractive internal foam liner to keep out dust and protect against a degree of moisture. Four good-quality castors are fitted to the rear panel, there are excellent large carrying handles on the sides (oriented for a straight lift when 'wheels down'), and rubber feet are fixed to two surfaces so that the unit can be used in portrait or landscape mode. The whole thing measures 640 x 520 x 785 mm (HWD) front-to-back including the casters, and at 47kg it's certainly not the heaviest nor the largest powered 18–inch sub out there. The KS118 is a very easy two-person lift and carry, and it's very manoeuvrable thanks to the large castors and well-placed handles. Output pattern is omnidirectional, unless using the cardioid mode when it becomes (you guessed it) cardioid, with 15dB of rear rejection possible at 70Hz.

User control is by means of a rotary level adjust knob, a rotary encoder, two buttons and a small but clear display screen that tells you everything you need to know about what's going on. The DSP is controlled using the rotary encoder (to select menu items and make parameter adjustments), and two push buttons — one to exit or step back, the other to confirm settings and load the currently dialled-up values.

The DSP enables access to the internal low-pass input filter, offering the choice of 80Hz (recommended for current K.2-series tops and providing time-alignment when used with a pole-mount), or 100Hz for use with legacy QSC speakers. Other DSP features include the ability to dial in delay directly on the sub itself (displayed simultaneously in milliseconds, feet and metres up to 100ms or 113 feet), call up the Deep mode for additional LF output below 60Hz with a 3dB sensitivity offset to maintain headroom, and scene store/recall — you can save the settings for next time, with five storage slots available. The utility menu allows adjustments to LCD screen contrast, front/rear LED on/off, and a factory reset option. Lastly and perhaps most interestingly, the cardioid sub-menu presents just three options, namely Off, Forward and Rear — it's that simple. Note that if a sub is configured as rear-facing in cardioid mode, some of the DSP features are locked out, as it has to remain optimised when working as part of a pair. As far as I can see, you can't get it wrong, unless you forget to place the subs properly.

My first impressions were that the KS118 is a surprisingly compact-looking subwoofer and you might easily take it for a 15–inch version. It is a clean-looking design and has that slightly concave front grille common to other QSC speakers. The black foam lining looks great too, and the whole thing gives an impression of strength and quality. When de-palleting these demo units I didn't have any human assistance available, and I was able to stack the KS118s two-high by myself, thanks to the placing of the side handles — the curved front grille also helped a bit, as it turned out to be an almost perfect match for my own convex frontal area...

What was apparent was the amount of clean, strong sub-bass that the KS118s were providing.

I was keen to try out the cardioid configuration, so I navigated the menus to set one sub as 'forward' and the other as 'rear' and fired them up, along with the K12.2 full–range speakers that had also been provided. A few minutes later, having remembered that one sub should face the other way, I reconnected everything and fired up again. In the limited space of the studio the cardioid effect was probably never going to manifest itself over much, but I reckon I could definitely hear a difference between front and back. What was apparent was the amount of clean, strong sub-bass that the KS118s were providing. After a few minutes of shaking bits off the ceiling tiles I decided to wait until the following day, when I'd be using the system on a live stage.

The QSC user manual goes into a bit of useful and interesting detail about the cardioid configuration, and suggests that — so long as at least two subs are adjacent — they can be placed side-by-side, back-to-back or stacked vertically. The recommended placement is back-to-back, ie. both subs on the floor/stage, one facing the audience and one directly behind facing away from the audience, with the casters just about touching. It's generally a good idea to go with the recommended layout, at least to begin with, and as it happened this was perfect for the event. So, with the subs set to cardioid mode, and designated as front– and rear-facing as appropriate, I connected them up with the K12.2 top boxes on poles above. The KS118 crossover menu includes a specific setting for use with K-series speakers so I just went with that, and took my iPad out front to have a listen.

These KS118 subs are powerful things, and seem to have loads of operating headroom; they remained clear and solid with a range of material and at everything from front-room level to a hard stare from the kebab man across the square. I prefer direct-radiating subs where possible, and although I ran these fairly hard at times, there was no question of needing to switch in the 'Deep' mode as the town centre just didn't appear to require any more bass. The cardioid mode was very effective, and my non-negotiable mixing position directly behind one of the KS118s was a much nicer place to be than the previous year! Yes, the LF content was still more than audible on stage, but to an acceptable degree, especially considering how much was being delivered to the audience area.

The K12.2 full–range speakers were an excellent match too, and I have to say that the system sounded very well balanced and smooth, with an abundance of output available for this outdoor gig and plenty more where that came from. The KS118 subs were strong, capable, and delivered the goods all through the event; I was very impressed by them and wished they could have stayed with me for another few gigs.

QSC's new KS118 subwoofers are powerful, flexible and neat. They combine great delivery with a relatively compact physical form, and the cardioid capability is something that can benefit just about any live sound setup.