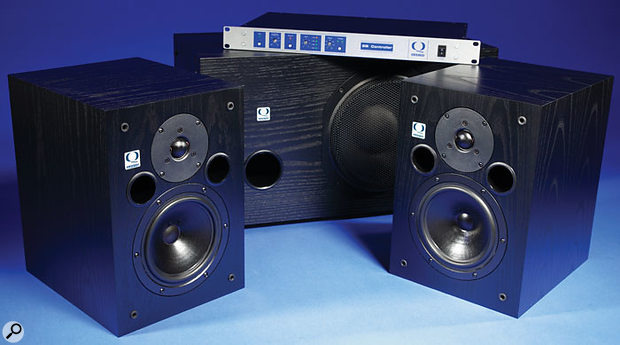 The S7 active monitors and SB10 subwoofer, with the subwoofer's rackmount controller and amplifier.Photo: Mike Cameron

Tried and trusted design principles have been combined with quality components to create this new range of high-spec studio monitors.

At one time Roger Quested was best known for his monstrous soffit-mounted monitors, but recently he has focused on more pragmatic solutions for smaller studios. His latest range of active monitors is the S series, comprising the smaller S6 and S7 (which I had for review) and their larger brethren, the S8 and S10, any of which can be used with the range's SB10 subwoofer.

All the speakers other than the subwoofer are two-way active designs, where the S6 is the smallest, with its five-inch Italian-built bass/mid-range driver and 28mm Morell soft-dome tweeter. These are magnetically shielded, as smaller speakers may be used close to CRT monitors. Whereas the other models in the range are based on conventionally ported cabinets, the S6 employs a fully enclosed 'infinite baffle' topography. Driving the woofer is a 65W power amplifier, while the high-frequency unit is powered by its own 45W amplifier, with the crossover frequency set at 1.19kHz. Additional sub-bass and high-frequency filtering is implemented at 45Hz (24dB/octave) and 75kHz, resulting in a frequency response of 75Hz-22kHz ±2dB. Quested rate the maximum SPL of the S6s at 104dB using pink noise, or 116dB per pair at one metre using an RMS music source.

While some speaker designers spend a large part of their budget on cosmetics, the S-series monitors are very unpretentious, with machine-built cabinets fabricated from 19mm high-grade MDF, laminated on both faces with a black ash finish. As the S6 measures only 240 x 170 x 290mm, no internal bracing was felt to be required. Nevertheless, what you do get is properly engineered — the speakers are secured into their machined rebates using metal 'T' nuts and cap-head screws, not plain old woodscrews, and the underside of the cabinet has threaded metal inserts to accommodate standard Omnimount fittings or to secure it to Quested's own speaker stands should you choose those. Overall, the S6s weigh 7.5kg each.

Acoustic damping material (bonded acrylic fibre) is used inside the cabinet, and the amplifier section resides within the back of the box, using the substantial metal rear panel as a heat sink. A combi-jack/XLR connector is used to handle the input, while the screwdriver-adjustable gain trim is calibrated with the unity-gain point clearly shown. High- and low-frequency compensation is available via the familiar DIP-switch system, providing a choice of flat, 2dB tilt up, or 2dB tilt down at 10kHz, as well as two degrees of bass roll-off below 82Hz (-2dB or -4dB) as an alternative to flat. All my tests were carried out using the flat settings. Mains IEC cables are supplied, and once the power is on, LEDs on the front panel glow green. There's no formal speaker protection, as such circuitry often compromises audio performance, but the LED changes from green to red when the signal levels approach clipping. Amplifier specifications of -100dB hum and noise (relative to clipping) and a THD of better than 0.03 percent (and typically 0.005 percent at 1kHz) are quoted.

Other than the port tube fitted to the front baffle, the S7 is built in a similar way to the S6, and combines the same one-inch tweeter with a 6.5-inch bass/mid-range driver. Again magnetically shielded, it uses a 120W amplifier on the low end augmented by a 70W amplifier on the high end, and manages a frequency response of 65Hz-22kHz ±2dB. It features the same rear-panel connections and controls as the S6, as well as the Omnimount points in the base, but of course the cabinet is somewhat larger at 250 x 300 x 350mm and weighs 11.75kg. The maximum SPL per pair with a music source is 121dB at one metre. The internal subsonic filter operates at 30Hz, though the ultrasonic filter frequency and crossover frequency remain the same as those of the S6.

Quested's SB10 subwoofer is also made with black-ash-veneered 25mm MDF, and its amplifier and crossover electronics come as a separate 1U controller, rather than being built in. This has the advantages that the controls are easy to access and the circuitry is subjected to less vibration. Substantial speaker cables connect the unit to the speaker cabinet, and combi-jack/XLR connectors are provided for the audio inputs. Line-level outputs are fed to the main active speakers via XLRs. The subwoofer can be bypassed from a button on the rack unit's front panel, allowing the main speakers to be heard in isolation without the low-cut filtering that is applied when the subwoofer is active. The control unit also provides gain, crossover-frequency, and phase adjustment, with a button for inverting the subwoofer's phase — something that the constraints of possible room positions sometimes require. A Test button activates an onboard pink-noise source for setting up, although this is filtered, as only low-frequency content is required.

Essentially, the SB10 speaker is a conventional passive, ported design using a single ten-inch long-throw driver powered by the 215W amplifier in the rack unit. It measures 617 x 333 x 290mm, which is surprisingly compact for such an effective subwoofer, and weighs a manageable 19.8kg. Subsonic and ultrasonic filters are built into the controller unit at 14Hz and 100kHz, where the crossover between the subwoofer and the main speakers is user adjustable in the range 40Hz-135Hz. With the S6s, the crossover frequency needs to be set to around 70Hz, or 60Hz for the S7s. (The larger S8 and S10 models apparently work well without a subwoofer, but you can still add a subwoofer if you need extra headroom at the low end.)

I started my listening tests using the SB10 sub, starting with the S7s mounted on a pair of Quested stands. The subwoofer was set up between the monitors, but offset to one side, and Roger Quested came along to check the result in my room using hand-held test equipment. Using a noise source and spectrum analyser, it was a fairly straightforward job to balance the subwoofer to get a flat response, though adjusting the phase control is also important, as this determines how even the response is across the crossover transition. Unusually, Quested are offering purchasers a one-day free loan of the test equipment, with setting up instructions of course, so that they can optimise the system for their own room. 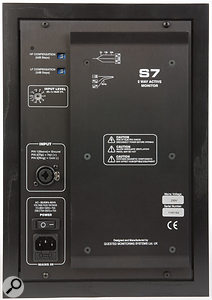 Above its rear-panel combi-jack/XLR input, the S7 carries HF and LF frequency-tailoring switches and an input gain trimmer.Photo: Mike CameronIt was clear from the outset that this system performed well, and the stereo width and separation between instruments was excellent, with a smooth but very detailed high end. Voices were carried smoothly and positively in the mid-range, and the subwoofer integrated so well into the overall sound that there was absolutely no way to tell that a subwoofer was in use at all, other than the extra bass extension.

Some speaker systems make a big fuss about bass, but on first listening the Quested system doesn't actually seem to be doing anything spectacular at the low end. I think this is because the bass is very tightly controlled, so you don't get that giveaway boomy overhang on low notes. It's not often that you can describe bass as being transparent, but here it is — you definitely don't perceive that over-inflated 'I've added a subwoofer!' effect. The chest-shaking frequencies are still there, but only when they should be. A further point — and one which shouldn't be overlooked — is that the system seems very forgiving of placement and is less adversely affected by sub-optimal room acoustics than some monitors I've tried, especially those with rear-mounted ports. I set the speakers up around a metre from the end wall in my studio so as not to disturb my existing monitor system, which I wanted to use for comparison, and they performed brilliantly with no need to fiddle around with their positions.

Switching to the little S6s and readjusting the subwoofer crossover settings produced a remarkably similar result. Indeed, the low end may have actually sounded a hint clearer, but the essential family sound was maintained. This consistency across the range is particularly important in professional circles, as it allows multiple rooms to be set up using different monitors, where mixes can be meaningfully moved from one room to the other. It's also possible to set up a surround system using the smaller S6s at the rear and larger S-series speakers at the front without losing coherence.

Repeating the tests without the subwoofer showed the larger S7s to have a very respectable bass extension when used on their own. Having said that, the larger models would probably make more sense for full-range monitoring without a subwoofer in a larger room. As expected, the smaller S6s are a bit bass light when used on their own, though they still have enough low end for desktop pre-production or tracking work, where their clarity and revealing nature would be definite advantages.

These monitors come out at the upper end of the project-studio market price range in the UK, being in a similar ball park to Genelec, Dynaudio, and bigger Mackie monitors, so they're by no means out of reach for the serious enthusiast who wants professional-quality monitoring that's designed to last. I wouldn't really recommend buying the S6s to use without a subwoofer unless you are working in a very small room. However, if you're going to buy a subwoofer, there seems to be no huge advantage in buying anything bigger than the S6s, as in conjunction with the SB10 they sound fantastic and can generate plenty of clean volume. The S7 is just on the verge of needing a subwoofer, depending on room size, while the larger S-series speakers would probably benefit very little from an added subwoofer given their stated low-end performance.

Roger Quested seems to me to be a very pragmatic speaker designer, and he gets results by spending money on the parts that count, engineering the enclosure properly and then getting the electronics right. There's no excess money spent on fancy cabinet cosmetics and no forays into unknown technology — just solid engineering. This approach certainly seems to have paid off in the S series, and I can honestly say that these are amongst the most impressive monitors I've heard in some time.

These are really good-sounding, revealing monitors with exceptional stereo imaging, and are built to last at a realistic price. For my money, the S6s with the SB10 subwoofer represent the best buy for the smaller studio.